Happy New Year! It's that time once again to take a quick look at my favorite gadgets of last year. The gadgets I've chosen were the ones that I used the most and that had the most positive impact on my day-to-day life. These gadgets were either introduced in 2009 or had significant updates in 2009. These are the gadgets that I would recommend to a friend without hesitation. So let's get to it…

Anyone that knows me knows that the iPhone 3GS is my communications device of choice. The 3GS made my life easier this year with more memory, a faster processor, and graphics to run apps that I never dreamed of right from the palm of my hand. I use my iPhone quite a bit in my day to day routine. I actually get a ton of work/communications done with this device.  I get both work and personal email, SMS and MMS messaging, productivity and business apps, and yes even the ability to make calls. This is the one gadget that I now couldn't imagine being without. See my original iPhone 3GS review here. Learn more about the iPhone 3GS here.

See my Must Have iPhone Apps here. 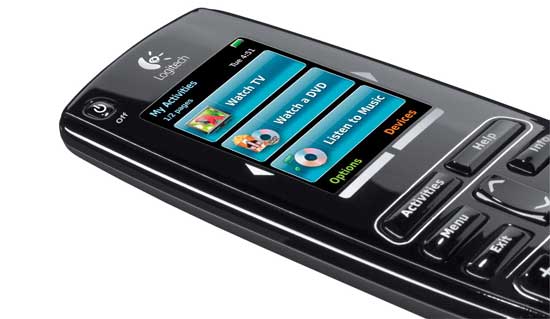 When I am at home and not producing content, I enjoy my home entertainment systems and home theater. The one remote that has worked for me better than any other remote I've tried is the Logitech Harmony One. This remote is configured from your computer to do exactly what you want. Anyone with more than a couple of entertainment components should do themselves a favor and check out the Harmony One. See my original review here. Get the Harmony One Remote here.

END_OF_DOCUMENT_TOKEN_TO_BE_REPLACED

Attention Shoppers! I just wanted to remind you that today (August 31, 2009) is the last day to save $30 on the Navigon Turn-by-Turn GPS app for the iPhone. Today it’s $69.99. After today the price goes up to $99.99 (according to Navigon). The Navigon GPS App is available here from the App Store.

UPDATE: The Navigon app did go up, but only to $89.99. I guess they still want to be cheaper than TomTom.

You can see my Navigon App Review here. Also here is my Tom Tom App Review in case you missed it. Also the Vent Mount that I use to mount my iPhone 3GS is reviewed here.

A Nice Comparison of 4 GPS Apps for the iPhone

I thought Mike over at Insanely Great Mac did a nice job in telling you about his likes and dislikes comparing the 4 most popular GPS apps (AT&T, Navigon, Tom Tom and G-Map) for the iPhone. See his video comparison below: 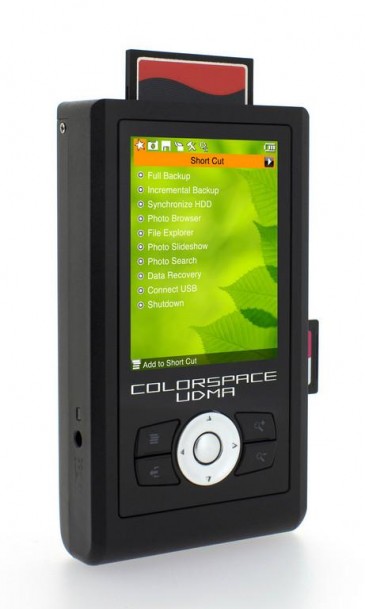 If you’ve ever been the victim of a corrupted or damaged memory card that resulted in the loss of photos, you know how important it is to backup. I always travel with a notebook computer even when I go on vacation. However, if I’m out shooting on location, I don’t carry my notebook with me. It’s usually left behind in the hotel. That being said, I have been a fan of having a backup device on location with me.

I rely on my Epson P6000 Multimedia Device to backup my memory cards when I’m on the go. I really like the device and gave it a favorable review. The only thing that I don’t like about these Epson devices is the price. In my review I noted that you can bet a full blown notebook computer for what Epson charges for their backup devices. Today I’m reviewing a competitor in this important category.

At the end of the day these devices combine 3 things: a hard drive and LCD display and a couple of memory card slots. Now of course there has to be an operating system and controls to be able to use the device for its intended function, but as far as hardware goes, there really isn’t that much there. That’s why I never understood why the Epson devices cost so much other than they probably felt that they could charge it if people are willing to pay it.

The HyperDrive Colorspace UDMA is a lot more "open minded". First off they use standard notebook 2.5" SATA hard drives. I’m sure Epson does too, but the difference is with the Colorspace you are free to swap out the drive yourself without voiding the warranty. As a matter of fact they even sell the base model without a hard drive so that you can put in one of the ones you may already have. Although I probably do have a hard drive that I could have used from a previous notebook upgrade, I decided to start fresh and order their next model up, which comes with a 120GB hard drive. This should be more than enough for my needs since I really don’t use these devices for long term storage. Also keep in mind that my Epson P6000 only has an 80GB drive so this is an upgrade in terms of storage.

END_OF_DOCUMENT_TOKEN_TO_BE_REPLACED

When the iPhone OS 3.0 update was introduced, Apple opened the door to 3rd party turn-by-turn apps. They brought TomTom up on stage to show off the app that they were working on. I was impressed by what I saw and thought that this might be a chance to carry one less device when I travel. I'm very fond of my Garmin Nuvi 765T and the chances of a Garmin App for the iPhone are slim. It seems that Garmin would rather compete with a phone of their own (Garmin, look at the Palm Pre. You guys just don't stand a chance against iPhone and Blackberry). So an iPhone app would have to be really killer to make me give up my Nuvi. I'm also a fan of Navigon GPS units too. Actually it's not so much about their hardware that I'm impressed by as much as it is their software. I fell in love with the Navigon 3D Reality View, which pops up a photo realistic image of the road signs you're going to go under so that you're in the right lane. Not long after the TomTom announcement was made, Navigon announced that they would have an iPhone app too! 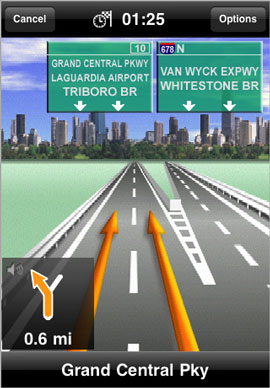 In many cases first to market can definitely get you a leg up on your competition. If you have a really good app, then it makes it that much harder for your competitor. It's pretty clear that Navigon wanted to be first. Why you ask? Two reasons: for one they are offering their app for an introductory price of $69.99 until August 15th. Then the price goes up to $99.00. This of course creates a sense of urgency. The second reason is that they state right on their App Store page that a free update is coming with additional features. I would argue that a few of those features should have been in the first release. What was the hurry? Oh yeah, right. That whole get it out first thing. I remember now.

END_OF_DOCUMENT_TOKEN_TO_BE_REPLACED 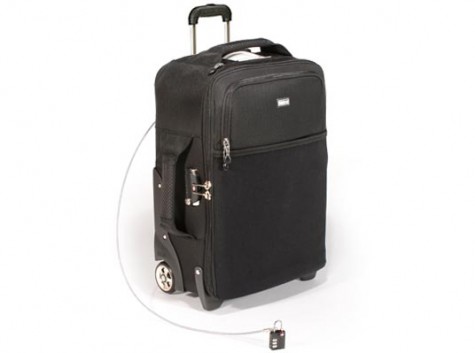 I have a wide assortment of computer bags, suitcases and camera bags. Different sizes and used for different needs depending on how much gear I want to carry and how long I’m going to be gone. However, I wasn’t really happy with my large camera bag only because it always seemed like I could never fit everything I wanted to carry. If I wanted to carry two camera bodies, then that would mean leaving a lens or speedlight behind.

END_OF_DOCUMENT_TOKEN_TO_BE_REPLACED 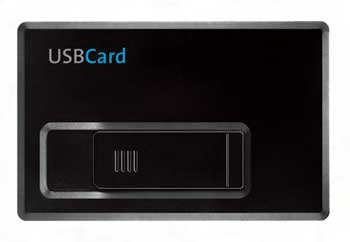 Just about everyone in the computer field carries around some sort of USB thumb drive. They’re great for transferring files back and forth and sometimes more convenient or faster than setting up a network share or emailing attachments. Before getting my USBCard a few years back, I used to always run into a situation where I needed a USB thumb drive, but wouldn’t have one handy. It would be on my key chain and my keys wouldn’t be nearby. I’d have one in my computer bag, which would just so happen to be back in my hotel room. The one thing I almost always have with me is my wallet! So when I ran across the USBCard by Freecom.com. I knew that this was the one for me. I’ve had it in my wallet ever since. 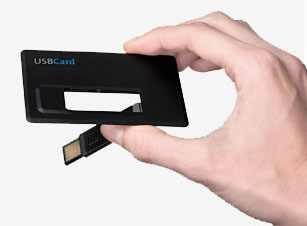 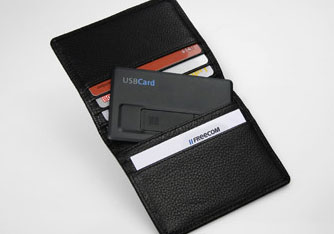 Whenever I go to use my USBCard people are always amazed by the size of it. I end up doing a 2 minute demo/show and tell every time. Of course being a gadget guy I’d want to recommend this solution to everyone that was interested. However, the problem was that they were out of stock for months. Well the good news is that not only are they back in stock, they also come in larger capacities. I have the 2GB model. Now they come in 1GB, 2GB, 4GB and 8GB models. They also now come in both Black and White. As you might have guessed, I’ve already ordered the 8GB model to replace my 2GB model (you can never have too much space). There is no telling how long these will be in stock this time around. So if you’re interested, I’d suggest ordering one today. 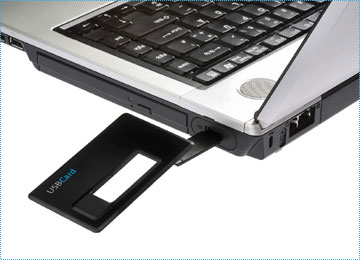 Here’s another video review. This time I take a look at portable external hard drives. In particular I look at the NEW Western Digital My Passport Studio 500GB Portable Hard Drive and how much of an improvement it is over my older Passport Studio drive.

The WD My Passport Studio drives come preformatted for Mac but will work on Windows PCs too. You can use it as a bootable drive for either Power PC or Intel based Macs. It can also be used with Apple’s Time Machine for backups. This drive is bus powered over Firewire or USB 2 connections.

In this video I mentioned the Synchrotech Firewire 400 to 800 adapter.

I’m starting to see more and more Western Digital drives around my office. So far no failures to date!

CORRECTION: In the video I stated that the OWC On-The-Go drives were not bus powered over USB. I was wrong (working off an old experience). They are!