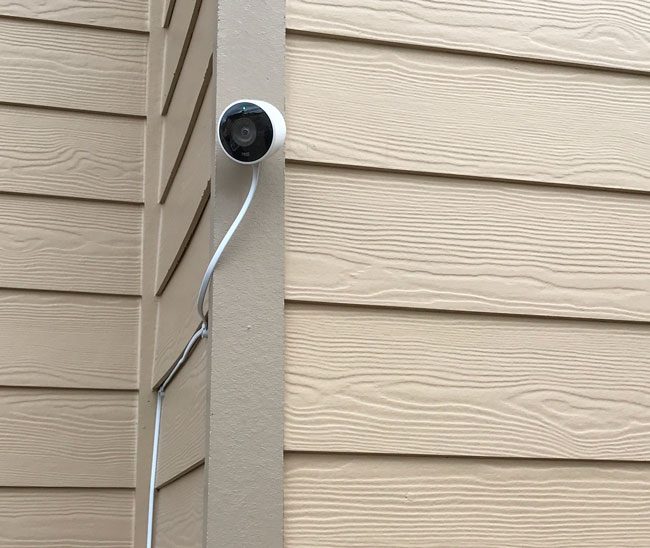 As the name implies “outdoor” means outside. It’s a weatherproof camera designed to be mounted outside your home. It connects via your home wifi. It offers all the same features of the Nest Cam Indoor, but comes in a complete weatherproof housing complete with mounting accessories to mount it to an outside wall. 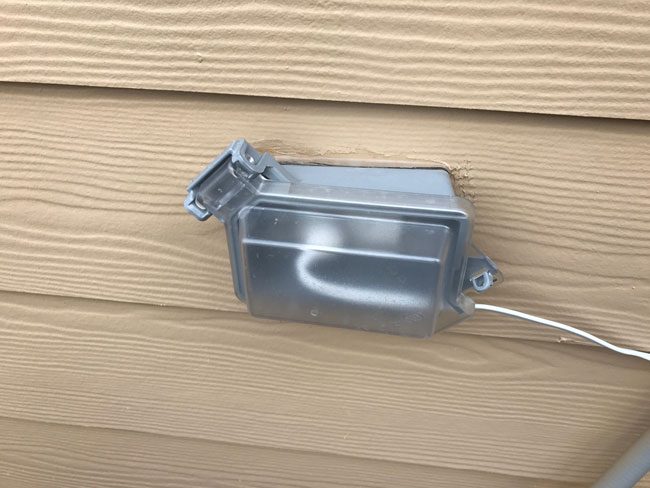 Installation is straight forward. Before taking the camera outside you plug it in inside to set it up. There’s a bar code on the camera itself that allows the Nest app to set it up instantly. It connected to my 5GHz wifi network with no problems. Once I had the camera setup then it was time to unplug it and go outside and mount it. Unfortunately the camera only has a 130° viewing angle (as opposed to a 180°). Therefore it really can’t cover my entire backyard the way I would have liked. I would really need two of them to the get the entire view that I want. Nonetheless I was able to cover about 80% of the area I wanted by mounting it on an exterior wall not to far from an exterior AC outlet. First I mounted the camera up high, pointing down and to the right. Then using the supplied cable fasteners  I ran the cable down a corner and over to the AC outlet. The whole process took about 20 minutes. 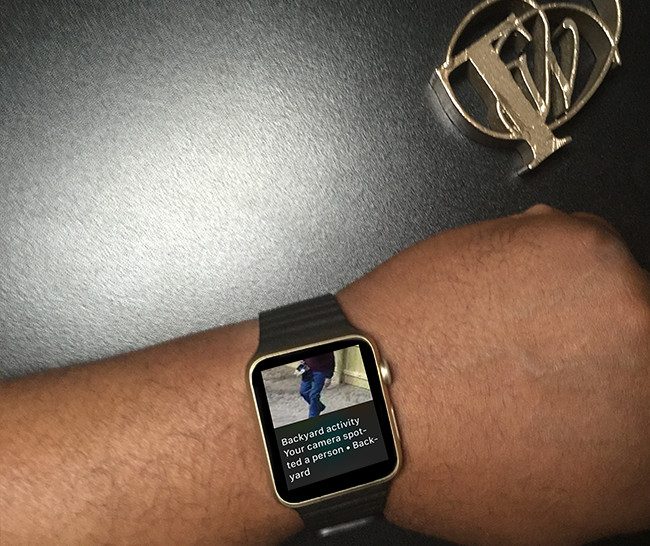 I was impressed by the image quality both during the day and at night with night vision. I was also happy to see a very very strong magnetic mount which allows you to angle the camera anyway you want while the mount itself is flat to the wall.

I created named “zones” to monitor for motion. These zones send push notifications to my iPhone and Apple Watch whenever there is movement in those areas and it will even say if it thinks it’s a person or not. There’s also a built in microphone and speaker so you can hear what’s going on and speak to people outside.  I love being able to pull of the live feed either on my iOS devices, web browser or Apple TV. I can not only see any trespassers, but also keep an eye on my puppy.

There is room for improvement

One of the biggest complaints consumers have Nest Cam and others like it is that in order to see events that happened beyond a 24 hour window you need to subscribe to a monthly/annual subscription based cloud DVR service. Google’s Nest Aware service is relatively expensive: A subscription that covers 10 days of continuously recorded video costs $10 a month or $100 a year for the first camera. Each additional camera costs $5 a month or $50 a year. A 30 day history costs $30 a month for the first camera, or $300 for the year. While this service is OPTIONAL, you really do want it to be able to go back and see events that happened before yesterday. This is my 6th Nest/Drop Cam and currently I only pay for the Nest Aware cloud services for 3 of them. For the other 3 having the ability to go back 24 hours is sufficient. I will likely add it to the outdoor cam once the 30 day trial has ended. It would be nice to have a way to record either to a memory card or other cloud service ie. Dropbox. However, I just don’t see that happening with Nest anytime soon. Yes they make money on the hardware, but I’m guessing they make a lot more money on the Nest Aware cloud service subscriptions AFTER you buy the hardware. This is old news. The Nest Cam Outdoor has a bigger problem. It’s the problem with the way the power cable is designed. This camera needs power to operate. That’s a given. While it would be nice to see a solar option, it is what it is. With that said, it feels like the engineers went out of their way to make a cabling system that is one-size-fits-all and as we all know that’s just not the case. 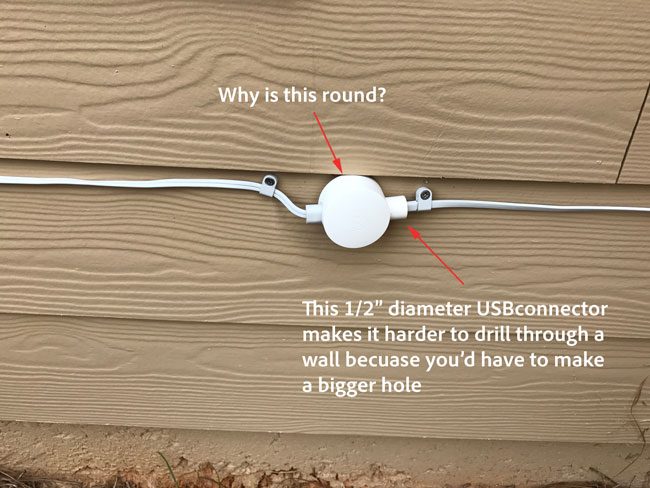 The Nest Cam Outdoor has a 10 foot cable that is hardwired to the camera itself. On the other end of that cable is a male USB connector. They supply a 15 foot power cable that has a standard two prong AC male plug on one end and and round USB power supply with a female USB port on the other end. The Nest Cam Outdoor connects to this power supply with a 1/2 inch diameter weather sealed locking connector. It’s great that in total you get 25 feet of cable. What’s not so great is that you get 25 feet of cable. No more, no less.

It was about 2-3 feet of excess cable for my situation. There is no way to hide the excess. I ended up coiling it and mounting the coiled up part behind an air conditioner unit. Yes I know that no matter how long the cable is you’re either going to have too much or too little. The bigger problem is that if you wanted to run the cable through an external wall, say a garage and plug it in inside your home/office then you’d have to drill at least a 1/2 inch diameter hole or cut the cable and splice it back together, voiding the warranty in the process. I know that some sacrifices had to be made to keep the system weatherproof from end to end, but it seems like the cabling could have been better designed or at least a flatter option for those who want to drill and plug in inside.

Pan/Tilt would be nice. I would also like to see versions of the Nest Cam that would allow software/motion detection pan/tilt. Another option would be security cameras that capture/record in 360°. These options will likely be slow to come because they would likely reduce the number of cameras you need.

Can’t a burglar just unplug it or cut the cable? 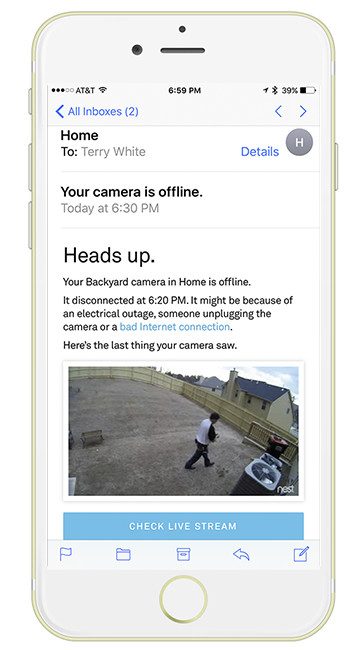 Yep! They sure can. There is nothing stopping anyone from simply unplugging your Nest Cam Outdoor, cutting the cable, covering up the camera (with shaving cream just like in the movies) or a number of other means of defeating it. You run that risk with just about any camera that is mounted outside. Nest did a smart thing by capturing a still image in the buffer right before it loses power. At least you’ll be able to see who it was that cut the power. My camera is mounted in such a way that the person would be seen before they could reach the cable/AC outlet. Keep in mind that your internet connection is probably a more likely target. A smart thief could cut your internet/cable connection before getting to your actual property. This is why some prefer having a memory card recording option, but if the thief also took the camera then your memory card would be gone too. 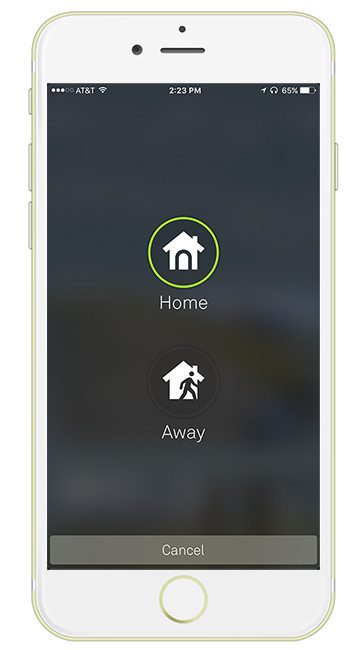 My alarm system has a feature that allows a push notification to remind me to enable the alarm if I leave the house. How does it know if I’ve left house? It uses the location of my iPhone. Sound great if you live alone. I’m stunned that Apple, Lutron, Alarm.com and several others offer geofencing as part of their home automation solutions, but they are all based on a single device determining if you’re home or not. If you live with anyone that doesn’t always leave and come home when you do then geofencing is useless. Google is the only company I’ve seen to figure out that not everyone lives alone. You can add someone to your Nest account and they can add their smartphone to become part of the geofence solution. Therefore if say you and your significant other leave then your Nest Cams can turn on automatically. If EITHER of you come home then the cameras can turn off automatically. They nailed this feature and it works great! I’m also happy that they allow partners to take advantage of it too. 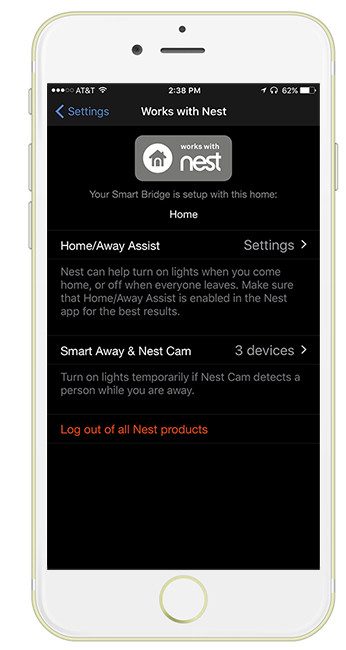 lighting takes advantage of Nest Aware too. So if everyone leaves the house then the lights turn on as programmed or using their Smart Away (random) feature. If anyone on the account comes home then this feature is turned off. 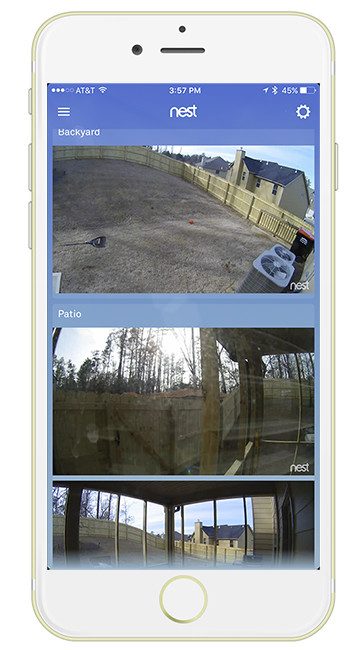 WiFi security cameras have always given me a little extra peace of mind by being able to check in on my home at anytime and seeing both internal and external views. The Nest Cam is far from perfect, but it’s one of the best on the market and offers me all the ways of viewing the camera (with the exception of a live feed on Apple Watch) that I like. Nest Aware should have a bigger break for multiple cameras, but at least they do offer a multiple camera discount.

You can get the Nest Cam Outdoor here

You can get the Nest Cam Indoor here