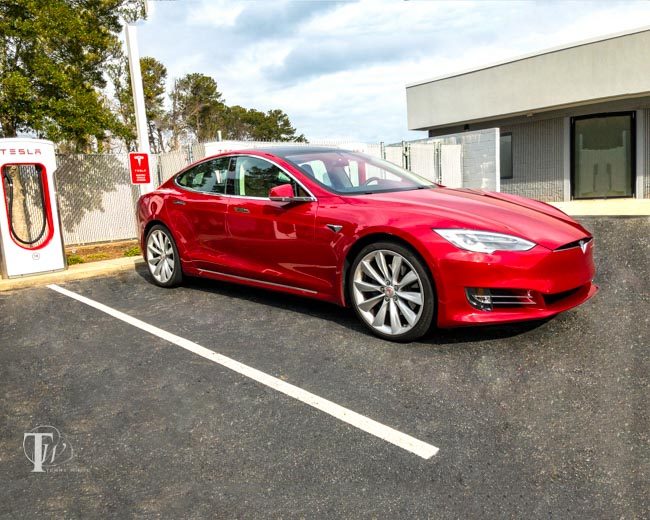 Rather than write about every little detail on the trip, I decided to document the trip via video and consolidate it down to this relatively short clip:

I tried to cover as much detail and answer as many questions as I could within the video above, but after I posted it I still got some questions from fans and friends. Let me answer as many as I can with this FAQ:

Q. I noticed that you really cut it close with your first stop by arriving with only 5% battery left. Is there way to have more of a cushion?

A. I purposely didn’t let my worries alter my driving. I wanted to see if the car was accurate in its prediction. As long as you make it to the Supercharger, it really doesn’t matter how much battery is left. It was extremely accurate all the way there. However, to answer your question and to help alleviate your “range anxiety” you actually have several things you can do to arrive with more juice. The first and easiest is to slow down. The faster you drive the more energy (or gas for that matter) you will use. Had I kept my speed to say 65-70mph I would have arrived at more like 10%. Next you have to keep in mind that I could have stopped at the Macon GA Supercharger if I were really worried. This would have been a short 10-15 minute stop, but it would have assured that I would have arrived in Tifton GA with more than 5-10% battery. If I had this trip to do again, I would do it exactly the same way. I had no anxiety about the 5% what so ever because I knew that I had enough to make it! 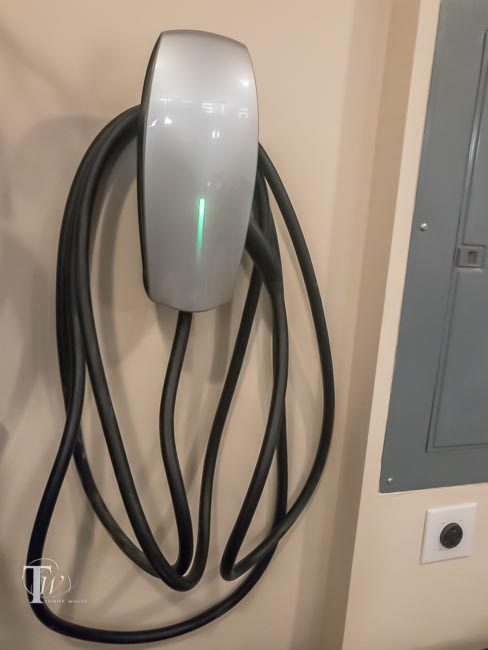 Q. How long does it take to charge? 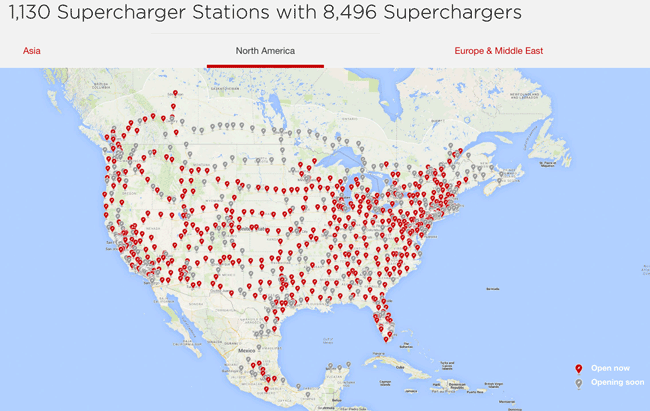 Q. What if you get detoured and you just can’t make it to the next Supercharger?

A. Sure anything is possible, but things like detours and heavy traffic most likely won’t impact your charge that much. Traffic has little to no impact because you’re just sitting there and therefore not using much energy. I’ll play along though. You just can’t make it to the next Supercharger with your current charge. You still have options. Supercharges aren’t the only place you can charge. Tesla has an even larger network of “Destination Chargers” located at hotels, restaurants, shopping centers, etc. You car already has these locations built-in to the Nav system. What? No “Tesla” destination chargers either? It doesn’t have to be a Tesla branded charger. Just about any car charger can be used with the included J1772 adapter. 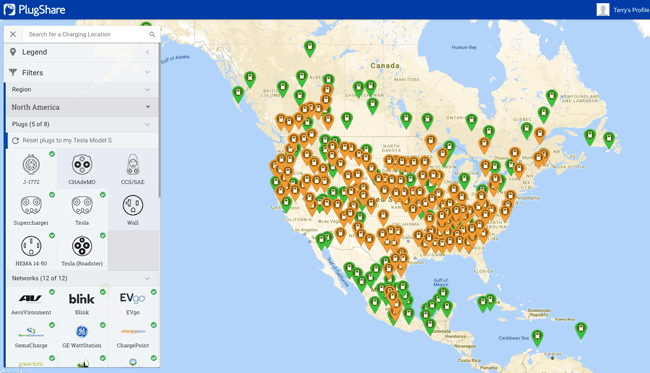 There’s a great site/App called Plugshare.com that shows you where all the charges are that are near you (not just the Tesla ones). Lastly your Tesla comes with a “Mobile Charger” that can plug into a standard 220v (NEMA14-50) ie. dryer plug or worse case scenario a 110v outlet (about 4 mph). If all else fails and you ignored all the warnings and just simply ran out, Tesla roadside assistance will come out and either charge you or tow you.

A. I’m gonna stop you right there. We can keep coming up with hypothetical situations to continue to fuel your range anxiety, but the reality is most Tesla drivers will NEVER face these situations. Day to day most EV owners charge at home or work. On the road Tesla has done a great job of building a charging network of FAST chargers (Superchargers).  The Supercharges are all with 200 miles of each other so that you can drive just about anywhere worry free. I have run out of gas twice in my life. I have yet to run out of charge on my Tesla or know anyone personally who has.

Q. How much does Supercharging cost?

A. Luckily for most Tesla Model S and Model X owners it’s FREE to use the Tesla Superchargers. I didn’t pay a dime to charge my car all week while on my trip. The chargers at the hotels were free too. You can get free Supercharging with your new Model S or X here. If you do have to pay for Supercharging the rates are here.

Q. How much is the electricity cost?

A. Quick answer: much less than gasoline. I live in Atlanta where electricity is relatively cheap (averaging .07-.11¢ per kWh) I have noticed a slight increase in my electric bill of anywhere from $20-40, which is much less than I was spending on gas and even with the car last month’s electric bill was $129 (for the whole house including car charging). That’s keeping in mind that I charge at home 99% of the time. If you charge at work or other free charging stations then your electricity cost could be zero.

Q. Can you have your home charger installed on a wall outside?

A. Absolutely. Lot’s of people charge their cars outside of their homes.

Q. Do you have to charge everyday?

A. Nope. You can wait until you “need” to charge, but I figure why wait? Whether I charge every day for an hour or 6 hours at the end of the week the cost is the same. I also like waking up to a full charge (90%) every day.

Q. You keep mentioning 90% charge. Does the car stop automatically at 90%?

A. Yes you set your charge level either in the car or the iPhone/Android app. You can even specify what time to start/stop charging if you have cheaper electricity rates at different times of day/night. This setting is also location (geo) based. At home I could have it start charging only after 11PM at night, but at my grandma’s house it could start charing as soon as I plug it in. 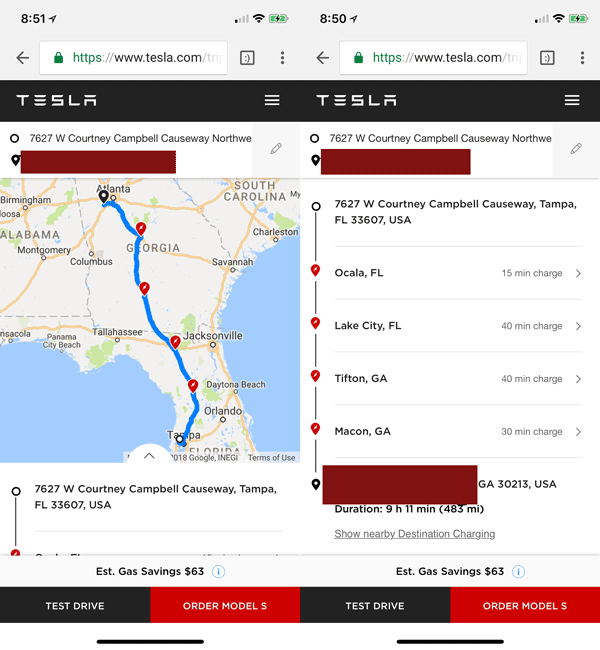 Q. Is there an online trip planner so that I can see how many stops I might have to make to charge?

A. Yes Tesla has one here but it is just an estimate. It predicted I would need to make 4 stops when only 3 were needed. The car knows best

Q. Do I have to be connected to WiFi to get the Software Update

A. No. The Tesla has built-in 4G LTE. No there’s not a cost for it as it’s included in the cost of the car. At this point you also can’t use it as a mobile hotspot to connect your laptop, etc. However, if you can connect your Tesla to a WiFi network your software updates will be much much faster.

Q. Is it really quiet?

A. Extremely quiet and zero emissions.

Q. What kind of maintenance do you have to do?

Q. I like the idea of driving an EV, but what about other brands?

A. All car manufacturers are planning to roll out more and more EVs. However, before you consider another brand there are things you’ll want to ask:

A. You actually order it online. I never met with a sales rep. It was the best car buying experience I ever had.

Q. How long does it take to get a Tesla Model S or Model X

A. Typically if you want to configure your own Tesla Model S or X it takes about 6-8 weeks to be delivered. If there is one in inventory that matches what you want you can get it within a week.  You can use my referral code here to get FREE Supercharging on Model S or Model X. Currently the less expensive Model 3 is backlogged for at least a year. 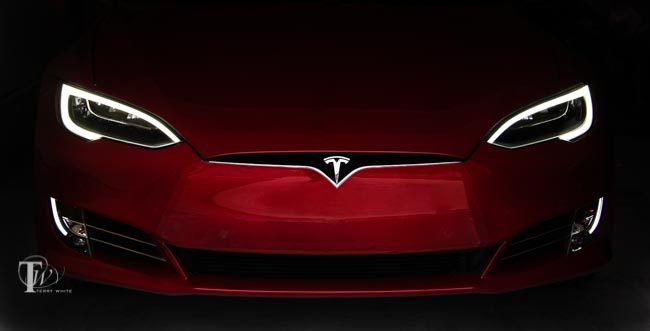 The Tesla Model S is hands down the best car I’ve ever driven/owned.