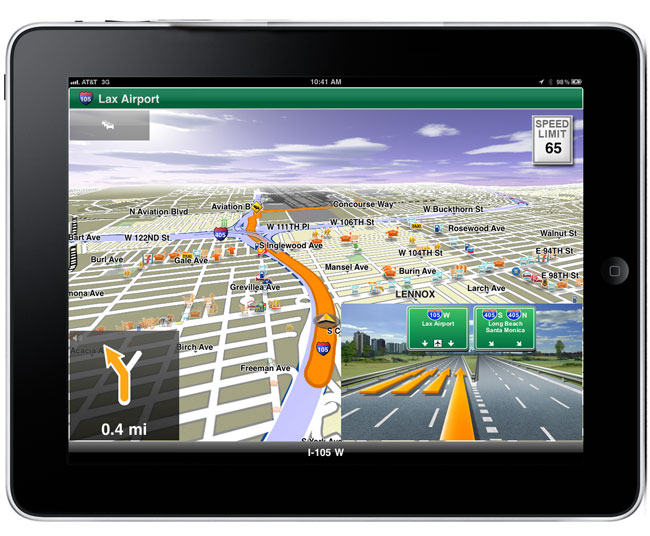 Once Apple updated iOS to allow Apps to run in the background I gave up on dedicated Turn-byTurn GPS units. I've been using the Navigon App on my iPhone ever since.  Navigon updated their Apps to be Universal Apps so that they would be native on the iPad too. I remember thinking at the time, "when would I ever want to use a big iPad for GPS navigation?" The first time I used Navigon on the iPad was actually the Europe version in Denmark. The advantage for me then was that i didn't have a car charger with me and the iPad battery would last much longer than the one on my iPhone 4. On that trip I was the passenger, so I could hold the iPad while Scott Kelby drove. I realized something during that drive. It was really nice having a big screen navigation system. While I love the Navigon App, I've always said that the text was a tad bit too small. However, on iPad that's it's big, beautiful and easy to read. Another advantage is that the iPad has a louder speaker that's easier to hear the directions. 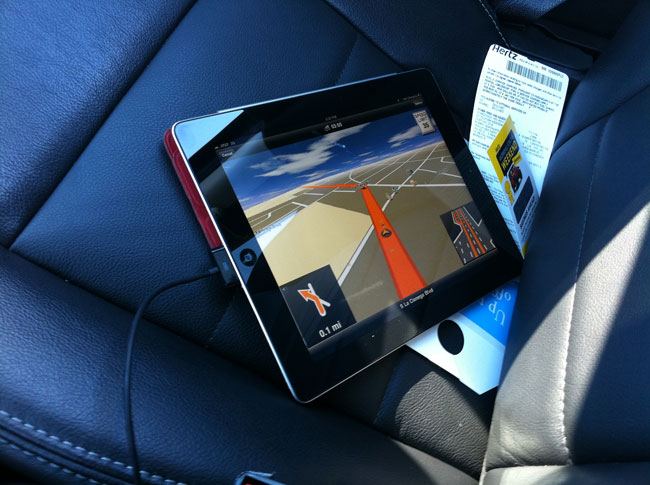 I decided to give it a try solo. During my last trip to LA I used the iPad as my GPS navigation. I just set the iPad on the seat as I didn't really need to look at it once I started driving. The voice directions were good enough. If you wanted to mount an iPad in your car permanently you could use something like this Arkon mount. However, I only use these devices/Apps in rental cars. Therefore, I don't need a permanent mounting solution.

The iPhone is always with me and I have no plans to delete the Navigon App from it. However, if I have both devices with me and I'm in a rental car, I'm going to use the iPad for navigation over the iPhone. If you want to use an iPad for navigation, you're going to want the WiFi+3G model as it has a GPS chip in it and the WiFi model does not. Also here's a car charger that will charge both your iPad and phone.

You can get the  Navigon North America App here from the