Last month while out of town on business I had an urgent need for more storage. One of my colleagues wanted to give me some new demo material and in total it was going to take up almost 1 terabyte of space. I had no where near that much available space on my laptop drive or either of the other two external drives I had with me. There was an Apple Store nearby so I headed over to buy a drive. I had no particular drive in mind although another colleague showed me his new LaCie 1TB Thunderbolt/USB3 drive. At least I had that one in the back of my mind as a starting point. I also had no idea which drives Apple would actually have in stock. I was going to be at the mercy of whatever was on the shelves as I needed the drive that day. I got to the store and found that they did in fact have the LaCie Rugged 1TB drive, but upon a quick glance at the specs I was stopped in my tracks to see that it had only a 5,400 rpm drive inside. What a waste! After all you’re paying extra for a Thunderbolt port and the drive would be pretty much crippled by the relatively slow spinning drive. I kept looking. For a moment I was tempted by a 2TB external drive (can’t even remember the manufacturer), but again saw that it was a 5,400 rpm drive. However, the 2TB capacity did sound nice since I knew that I was going to be getting almost 1TB of files to start with.
Then I saw the G-Drive 1TB Thunderbolt/USB3 Drive and since I knew the G-Drives were usually good performers I wasn’t surprised to see that it had a 7,200rpm mechanism inside. Now my debate was a fast drive but at only 1TB or a slow drive at 2TBs. Decisions, decisions. I ended up going with two of the 1TB G-Drives. The price worked out to be only $100 more than the 2TB drive and I was getting the same total capacity, but with much better performance. 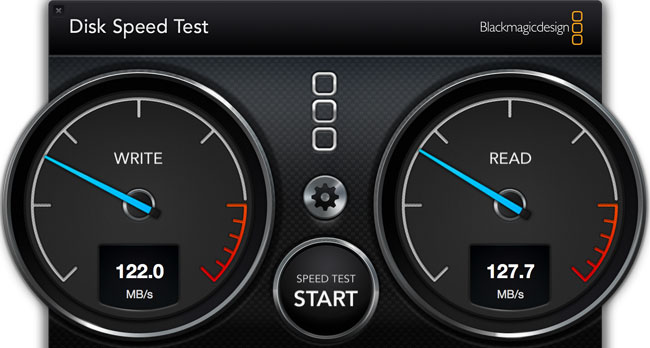 I knew the drives would be fast, but I was actually a little blown away by how fast they actually were. They came with both USB 3 and Thunderbolt cables and since I have a Thunderbolt port on my MacBook Pro, I plugged it in via Thunderbolt. I was floored by how fast the data copied. I even handed one to my colleague Jason and said “here, choose a fairly large file on your computer and copy it to this drive.” As luck would have it he had a 4GB file that was handy and it copied in under a minute.
Having both a Thunderbolt Port and USB 3 port means that I have the option of connecting it to pretty much any modern computer and I’ll get good performance. Even if I have to connect it to an older computer I’ll get USB 2 speeds. I didn’t really expect to like this drive as much as I do. I was just running out to get a drive to fill an immediate need. However, it’s now my favorite portable drive.

You can get the G-Drive 1TB Thunderbolt / USB 3 Portable Drive here.

SAVE MONEY! If you don’t have a Thunderbolt port or simply don’t need the Thunderbolt connectivity then you can actually get the same drive in a USB 3 ONLY configuration for about half the price here. I’ve used the drive above connected via USB 3 and it was still plenty fast.