My house was built in 2016. Back then I went with the security system that had been partnered with the builder. It turned out to be Alarm.com and later was acquired by Brinks. The system itself did its job. I was even able to set it up so that it could be armed via my voice by Alexa, Google Home and their mobile app. The system was basic and covered all the entry doors as well as a motion detector. It included a panel on the wall and this panel had the siren built-in as well as a cellular connection to the monitoring service. That’s it.

Why I switched from a system that I had paid off to one that I would have to buy from scratch?

With most alarm systems, the hardware cost is only part of the equation. It’s the monthly monitoring service that continues to cost month after month. The main point of monitoring is so that in the event of a burglary (or other event covered by your system) the monitoring facility is notified and can dispatch police, fire fighters, etc. Like most services these days, if you don’t watch the cost they’ll creep up on you. My monitoring with Brinks had reached the $41/month range. From time to time I look for ways to reduce my expenses and this one appeared to be one that was a candidate to be reduced. 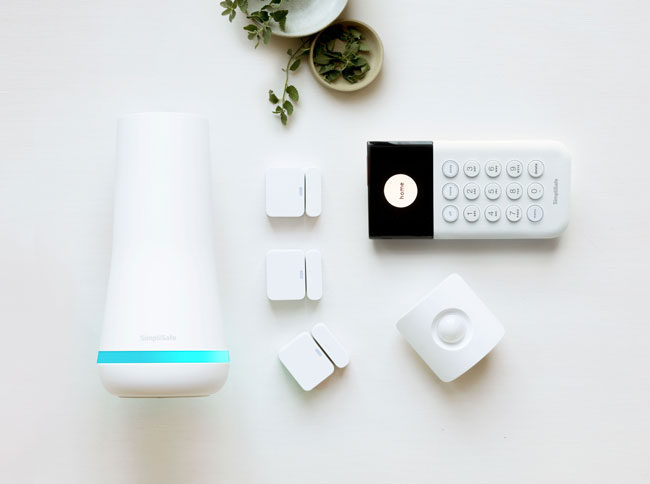 I had seen the commercials for SimpliSafe and since my existing system was completely wireless, I figured I could install the new one no problem. I ordered a SimpliSafe package with the base station, keypad, five entry sensors (these work on doors or windows), two motion detectors, two glass-break sensors, one key-fob, one panic button, one smoke detector (although my home has wired smoke detectors throughout, they aren’t monitored) and one extra siren for upstairs. At the time I ordered, SimpliSafe was including a Security Camera ($99 value) at no additional cost. I loved being able to order what I wanted à la carte. This way you can build/configure whatever size system you need for your home/office. Even with all the extras I ordered, SimpliSafe was about a third the cost of my original system. A system that offered way less in terms of sensors and peripherals and I had to sign a contract with the original system.

SimpliSafe offers monitoring with a choice between two plans. The Standard monitoring (24/7 monitoring, Cellular connection, Environmental monitoring) is $14.99/month and the Interactive plan ((24/7 monitoring, Cellular connection, Environmental monitoring, Mobile App Arm/Disarm from anywhere, Alerts on your phone, Secret Alerts, Video Alarm Verification, Unlimited Camera Recording, Smart Home Integrations) is $24.99/month. As you can already see there is savings to be had over my Brinks plan. I went with the $24.99/month plan so that I could have integrations with other smart home services and to be able to use the App. This feels like a slight ripoff, since the integrations that they charge an extra $10/month for are standard with most other systems, but nonetheless I was still saving over what I was paying before and had a system with more features.

How hard was it to install? 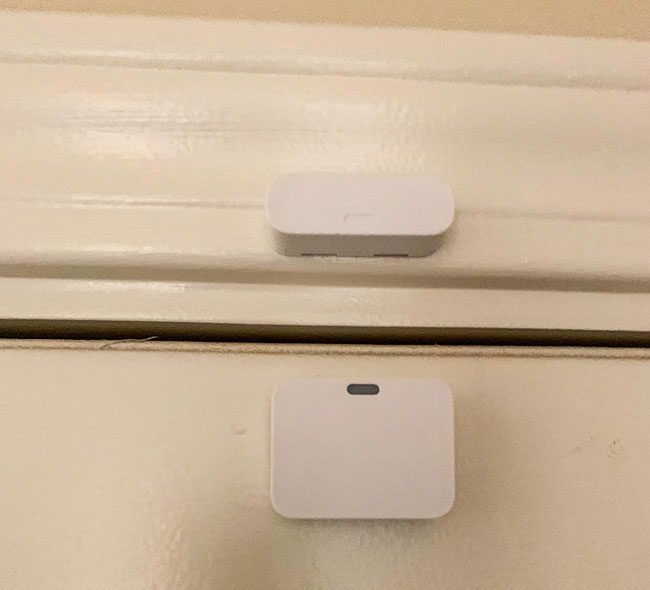 Installation was a piece of cake. The only thing that through me at first was that the system came pre-configured, meaning that all the sensors were already paired with he base station and I was trying to pair them via the included instructions. Once I realized that this was already done, all I had to do was mount the entry sensors on the doors and windows that I wanted to cover and mount the motion detectors, glass break sensors, extra siren and keypad. I put the system in test mode and confirmed that all the sensors were working. My entry doors have August Smart Lock Pros on them and SimpliSafe integrates nicely with them. If I arm the system Away or Home (Home means you’re home with the system armed but no motion detection) it will automatically lock the doors. 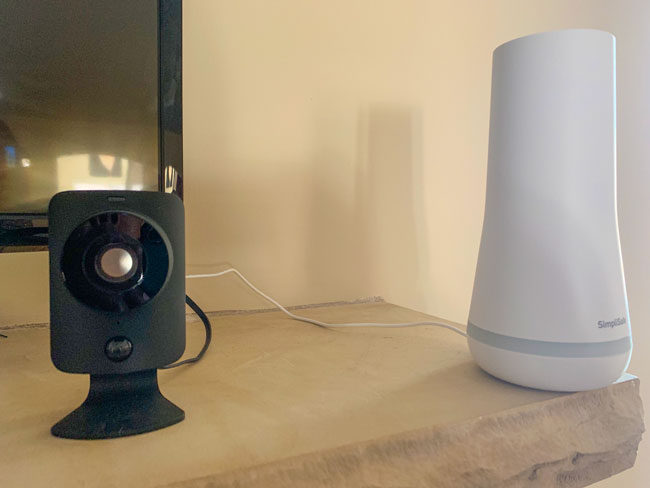 On Monday I did a post about various security cameras and in that post I didn’t include the one that came with my SimpliSafe system as it would only work if you have SimpliSafe, but I gotta say it has features that make me want to replace a couple of my other ones. First off, I love the privacy feature. There is a physical shutter that remains closed unless the camera is being viewed. You can hear it open/close so there is little chance that you could be spied on (some worry that Amazon and Google spy on them). Even if you didn’t hear the shutter open, there is a light that is on when the camera is active. Also unlike my other cameras, if there is an alarm event you can opt-in to have the monitoring service be able to view the cameras so that they can know exactly what’s going on. This could actually be a real life saver. They also offer a doorbell video camera, but I’m sticking with Ring for now.

Houston, we have a problem! 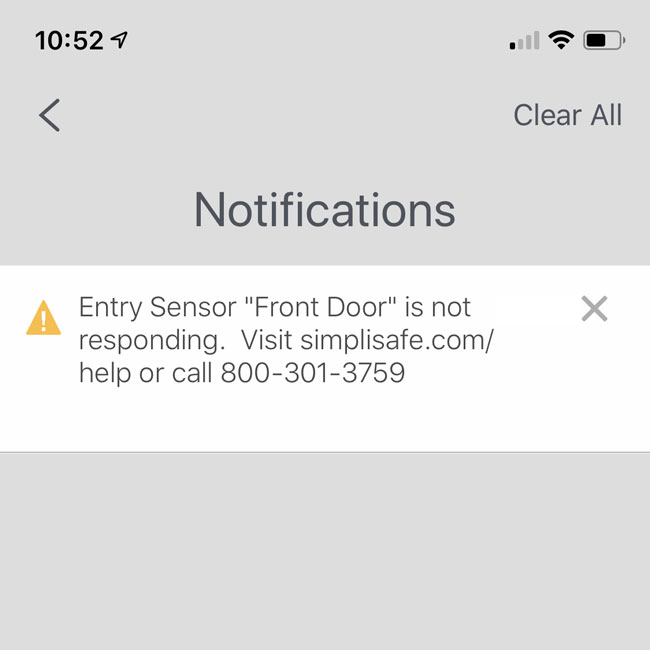 Although the install went perfectly fine, my home has a LOT of wireless devices and I’ve learned that SimpliSafe can be prone to wireless interference from your other wireless devices. Two of my entry sensors were constantly going offline and coming back on-line randomly. I got tired of this and called SimpliSafe. They sent me two replacements and I haven’t had this problem since. The wireless interference issue should be something that SimpliSafe works out either in their existing products or definitely the next generation as it’s only likely to get worse as people do more things wirelessly. The system I installed in my sister’s home didn’t have this issue because she has far fewer wireless devices than I do.

SimpliSafe works as advertised. I even had the monitoring center call me once when I was doing a lot of testing to make sure that I was ok and that the system was ok. My Brinks system had been set off a few times by accident and they only called once. Perhaps, it was disarmed fast enough that they knew it was a mistake, but at $41/month they should really call to verify that everything is ok.

There are a few things that they could easily improve. First if we are paying an extra $10/month for smart home integrations, then we should get more of them. I have Amazon Alexa, Google Home, and August Smart Lock Pro. This plus Nest Thermostat integration and their App, being able to control the system remotely is all your extra $10/month will get you today. The Google Home integration is ok. You can only arm the system with your voice. Disarming is not allowed via voice for security reasons. You can also add arming to a Google Home Routine. When I say “Hey Google, going upstairs.” it arms the system Home, locks the doors, and sets the rest of the screen (lights, ceiling fans, etc.). The Alexa Skill is practically useless in its current form. With the Alexa Skill there is currently NO SUPPORT for ROUTINES! Arggghhh. Therefore the only way to use it with Alexa is to say “Alexa, tell SimpliSafe to arm my system in home mode.” or “Alexa, tell SimpliSafe I’m leaving or good night.” Alexa really needs to rework third party skills so that you don’t have to say such long commands. However, the lack of Alexa routine support is squarely in SimpliSafe’s court.

I want HomeKit Support (and I figured out how to have it!)

The ultimate is to have SimpliSafe integrate with my Apple HomeKit routines. Unlike, Google Home and Alexa, I have complete control over Automations (routines) in HomeKit and I have geofencing. I currently have an Automation setup so that when the last person leaves the house it will automatically turn lights and equipment off that might have been left on as well as lock doors and you guessed it, it would be nice to arm SimpliSafe in Away mode. The CEO from SimpliSafe has promised HomeKit support, but from the rumors I hear, it’s in the “don’t hold your breath” category. 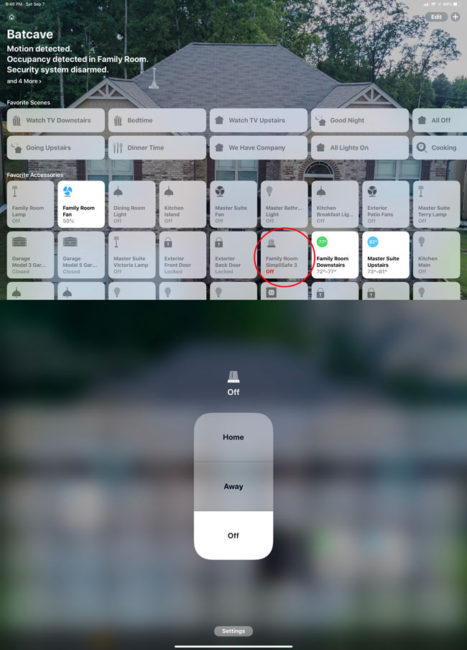 Knowing this I took maters into my own hands and installed an open source HomeKit add-on called HomeBridge on one of my servers. There is a nicely written SimpliSafe HomeBridge Plugin that works perfectly and gives me the Automation support I wanted.

You don’t have to be held hostage by the big name alarm companies. With no contracts, cost effective hardware that you can order à la carte and add on as needed, SimpliSafe is a great alternative. I have already added a second camera. I don’t regret my decision one bit and have already set it one up in my sister’s home as well. At her home I did install the SimpliSafe doorbell camera as she didn’t currently have one. All works well!

You can get SimpliSafe here and your first month of monitoring for free if you order with my referral link.