One of the promises of the AirPower was that you were going to be able to lay your device on it anywhere and not worry about it charging. SliceCharge Pro doesn’t quite have every inch of the mat covered, but they do provide six overlapping charging coils instead of the usual three. This means that you can put your devices in more places and at more angles without having to worry about it making contact. Although SliceCharge Pro does have six coils, they are still in a row. That means that your devices sill need to be relatively centered on the device. However, what makes this less of a concern is that there is a stand so that you can put the SliceCharge Pro in a vertical orientation and simply lean your device on it and it will make contact every time. They also have a little shelf if you want to charge AirPods (with the AirPods Wireless Charging Case). Lastly the integrated Apple Watch charger can be used either in its flat or raised orientation.

You can charge an iPhone (or Android phone) at full speed (7.5w for iPhone and 10w for Samsung Galaxy). You can also charge an Apple Watch and AirPods. However, if you don’t have wireless charging AirPods you can use the other space to charge a second phone. They include a 30w charger with the SliceCharge Pro and a USB-C cable to go from the charger to the mat. The 30w charger also has a plug that folds down for travel. It’s little things like this that appreciated.

Although the SliceCharge Pro is the best Qi wireless charger I’ve used to date, there are some things that could be better. First off the feature that I like the most is the one that needs to be improved the most. The stand doesn’t really click/clip onto the mat. there are two prongs that stick out from the stand and you push it into the mat. Sounds easy and it is, but the only thing holding it is friction. If you bump it a couple of times the mat will literally fall of the stand. I could simply put a couple of drops of crazy glue in the holes so that it never comes off again, but that doesn’t help me for the one that I travel with. They should have used another method to attach the stand that holds the mat more securely and yet can still be removed. The next thing that bugged me was that the USB-C cable is plugged into the top fo the mat in the middle. This is no problem if the SliceCharge Pro is laying flat. 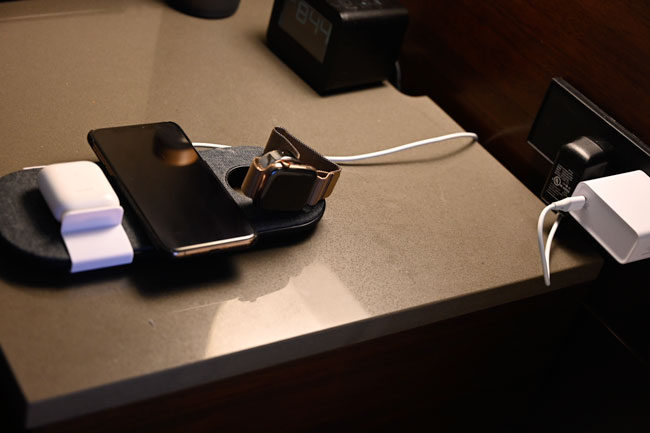 It works just fine that way. However, if you mount it on the stand the cable then sticks straight up in an awkward way. 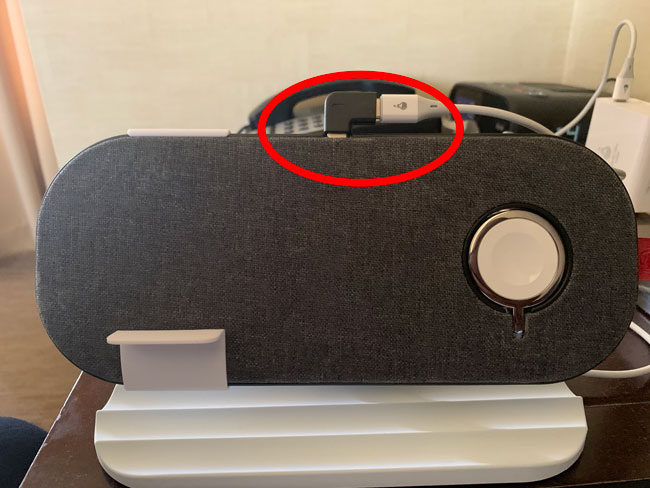 I got around this by buying this USB-C Right Angle (I guess since it’s USB-C it doesn’t matter if it’s left or right angle) adapter. This way I can aim the cable to the right or left the of the pad. I even tried mounting the mat upside down but that made it even more likely to fall off the stand. Lastly there is a little leather tab that sticks off the right side, perhaps it’s for cable management to run the cable through, but honestly it’s just in the way of easily sliding the Apple Watch on and off. If you have an Apple Watch strap that remains open when you take it off then this probably won’t be an issue, but if you use a strap like the Millinese Loop that remains closed even when you take off your Watch you’ll need to slide it over the end of the mat to put it on the charger in the vertical orientation. This is when the little leather tab just gets in the way. At home I just folded it back and put a piece of tape on it to keep it out of the way.

One more small thing. If you lay the SliceCharge Pro flat and flip up the Apple Watch charger it’s great, but there are no rubber feet on the back. This means that it slides around more than it should. Again this can be solved with rubber feet like these, but it should have come with them.

Qi Certified charging mats aren’t sexy. They are functional. They promise being able to charge your daily wearables and phones wirelessly and at the same time. The overall design is a huge step in the right direction. The included charger is smaller than my previous one and I like that the prongs fold down for travel. Everything above in my “How it could be better?” section above are easy fixes. They got the hard part right. The rest are easy cosmetic/functionality fixes. I bought two of these before they had even shipped. I’d buy them again.

You can get the Hard Cider Labs SliceCharge Pro here.