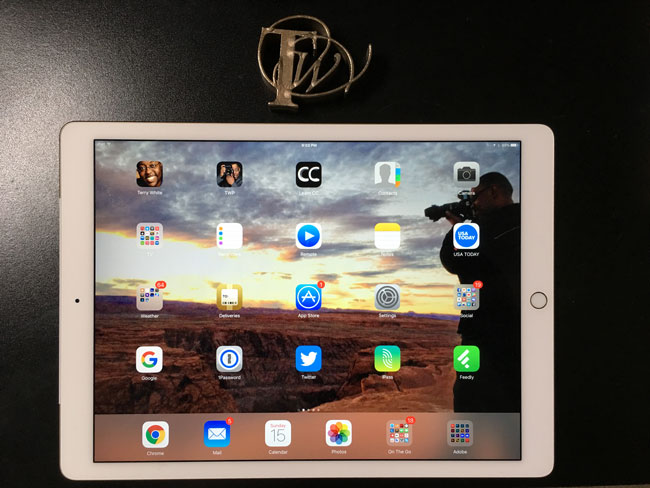 I received my work iPad Pro this past Friday and while I will do a more extensive review once the Apple Pencil and Apple iPad Pro keyboard arrives, I wanted to give you a quick update. As with any new major piece of tech that I get my hands on people want to know what I think about it? Is it worth it? Do I like it? Is it for me? Those are all good questions, but some of them are hard to impossible to answer when it comes to questions like “is it worth it?” That’s because it depends on YOU. I can’t answer if it’s a good fit for you or not. All I can do is tell you my experiences and you can go from there.

The iPad Pro is a bigger faster, more capable version of the iPad Air 2. It has a faster processor, a rumored 4GB of RAM and a 12.9″ display. What really sets this model apart from all other iPads to date is the integration with the optional Apple Pencil and Apple iPad Pro Keyboard. These option accessories are designed to work great with the iPad Pro and everything I’ve heard about Apple Pencil says that it’s a WINNER and blows away any other iPad stylus you may have used before. This is not surprising since the hardware was designed at the same time and tightly integrated. In other words Apple designed the display to work with Apple Pencil and vice versa. You get an unparalleled level of precision. I can’t speak on it first hand just yet, but stay tuned. The iPad Pro keyboard attaches to the iPad Pro with a special new connector. The good news is that there is a 3rd party version thats a little cheaper, backlit and a better case by Logitech. I can’t wait to try both.

Which model did I get?

Work approved the iPad Pro 128GB WiFi and Apple Pencil. However, I’m used to running the WiFi-4G LTE model so I paid the difference and went with the iPad Pro 128GB WiFi+4G LTE Gold model, Apple Pencil (supposed to receive this Thursday) and Apple Keyboard (Supposed to receive this Thursday). In the meantime I’m using this AWSOME Logitech keyboard

that Larry Becker recommended and I love it because it can pair with up to 3 devices and chose between them with a tap of a key. I use it on my iPhone 6s Plus, iPad Pro and Mac mini. I’m also using this awesome tablet stand.

This was my only real concern. Is it too big? When I get that question I answer, yes and no. People rarely complain about have a bigger display or more screen real estate. Seeing my favorite apps BIGGER is AWESOME. Taking advantage of iOS 9 split screen is also really really nice on iPad Pro. However, it’s a monster when it comes to one handed use or being comfortable with it in a relaxed setting like on the couch or bed. Part of this problem is that I don’t have the keyboard cover to steady it. Is it too big? No not for someone who is looking to use the iPad Pro instead of a laptop. Maybe for someone that still plans on carrying a laptop and an iPad. However, if that person is planning on using it as a creative canvas, then the size is just right. The iPad Pro screen is as wide as the iPad Air 2 screen is tall. You can almost fit two iPad Air 2’s side-by-side to be the same size as the iPad Pro.

The first thing I noticed besides the big display was the SPEED. OMG! it’s very noticeably faster than any previous iPad model. Using multiple apps is not an issue at all and never do I feel a lag that you sometimes feel with big iOS Apps. The extra RAM and faster processor rock.

Take a look at the replay to my live Periscope stream about it and doing real work in Adobe mobile apps:

I’ll have more thoughts on it once I get my Apple Pencil and Keyboard, but for now I can say that if you’ve wanted a bigger faster, better iPad, potential laptop replacement, then the iPad Pro is for you. Otherwise, the iPad Air 2 and iPad mini are still very nice alternatives. Probably the biggest downside for many will be the price (starting at $799US). Once you get into that price range you’re in direct competition with a notebook computer that can run your desktop apps. So you have to decide which is better for YOU.