A Perfect Use Case for Photoshop Fix and Mobile Apps 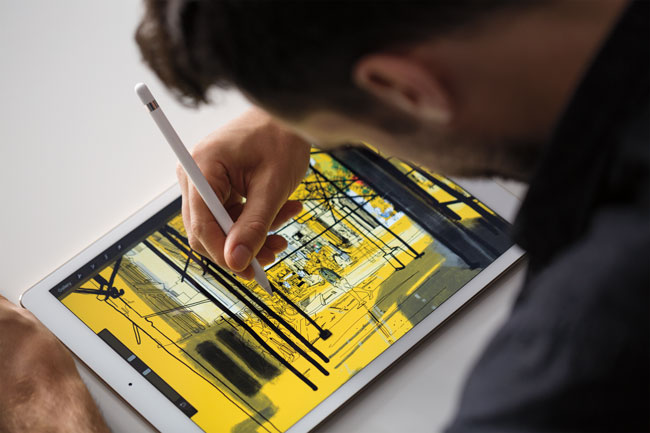 Adobe makes mobile apps for your iOS and Android mobile devices. Now that the iPad Pro is available people asking me more questions about running Photoshop or Lightroom or Illustrator on this big new FAST tablet? What’s the workflow? Why would I want to use an iPad instead of my desktop/laptop computer? Can I shoot tethered to it? How do I get my RAW files into it? How do I color calibrate it? Many of these questions are the same questions that people asked when the iPad was first introduced back in 2010 (yes it’s been 5 years already).

There’s a lot of excitement about the prospect of just carrying around this small, lightweight tablet and leaving your computer behind. While the iPad and now the iPad Pro are GREAT mobile devices, they were never designed to or intended to replace your desktop computers. First off let’s talk about RAM. Apple usually never shows the RAM of the iPad as a spec. I’m not talking about storage (16GB, 32GB, 64GB, 128GB), I’m talking about the RAM that the Apps run in. Rumor has it that for the most part the iPads have had 1-2GBs of RAM. The NEW iPad Pro is rumored to have 4GB’s of RAM. Now pause and take that in for a minute. When was the last time you bought a desktop/notebook PC that you wanted to do production level work with only 2-4GB’s of RAM? How well would an App like Photoshop CC run in only 2GBs of RAM? We also don’t know how much iOS itself uses. Instead of trying to cram desktop apps into the much smaller footprint of an iPad or Android tablet/smartphone, Adobe has done the next best thing by taking the tasks that people do the most and making FREE apps to do those tasks.

A perfect use case for Photoshop Fix 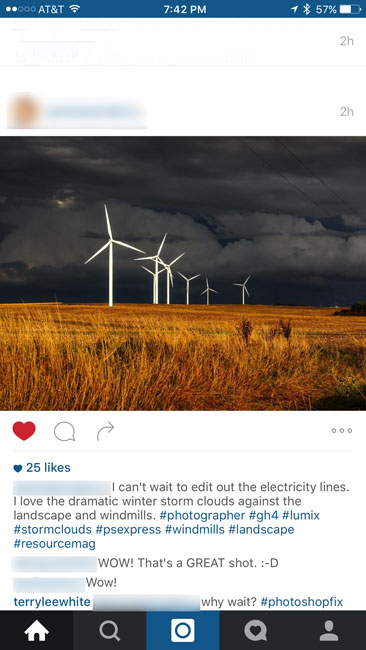 Often we are on location or in studio shooting and the results look so good that we want to share them immediately. That’s very easy to do. If you have a WiFi enabled camera (more and more are including WiFi as a standard option now – FINALLY). You can even transfer shots wirelessly from your DSLR to your iPhone/Android to share them. If you think about that for a moment, you’re actually doing something that you would probably wouldn’t have done a few years ago. We typically don’t take an image right out of the camera and show it to people. We tend to want to do some post processing on it first.

A friend of mine shot this amazing shot and she shared it on Instagram. It looks GREAT! However, look at her caption: “I can’t wait to edit out the electricity lines.” My response to her was “why wait?” She was so excited by this great shot that she posted it unedited and that’s one of main reasons that Photoshop Fix exists today! 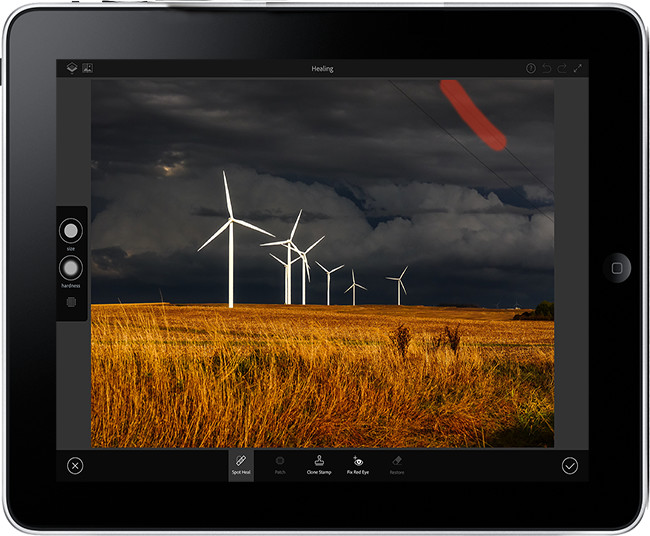 There’s no reason to post an unedited shot ever again. You can edit it right on the same device that you’re about to post from. We chatted via direct message (dm) and within a couple of minutes she had downloaded Photoshop Fix and removed the power lines from the shots and her response was “well that was easy.” It was easy because Photoshop Fix uses the same Spot Healing tool that’s found in Photoshop. 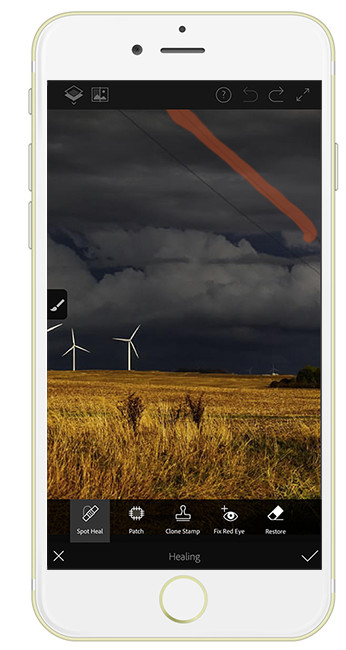 While having Adobe Photoshop Fix on the big screen of an iPad Air 2 or iPad Pro is pretty awesome, it’s actually more real-world to use it on the iPhone because that’s where you’re like to shoot more pictures, edit them and post.

Let’s answer some of those FAQs

A. There are lots of workflows for getting images into and out of your mobile device. For me the answer is Lightroom Mobile. Since Lightroom Mobile works in both directions (up and down). I can take my shots from Lightroom on the desktop with me via Smart Previews. When I shoot pictures with my iPhone 6s Plus, those 12MP shots sync up to Lightroom mobile via Creative Sync and then back down to my desktop version of Lightroom. When I get home, the shots I took are there! If your P&S or DSLR has WiFi that’s another option. I shoot RAW to one card and JPG to the other card. Those JPGs get transferred to my iPhone. From there I can import them into Lightroom Mobile if I want or simply edit them in Photoshop Fix and post. This doesn’t replace my importing the RAW files into Lightroom desktop. It’s simply a faster way to have and post edited images.

Q. Why would I want to use an iPad instead of my desktop/laptop computer?

A. The easy answer is the same reason you use your smartphone for email and web surfing. Your smartphone keyboard sucks by comparison to the physical keyboard on your desk, but I bet you couldn’t imagine going back to a time when you had to wait till you got back to your computer to respond to someone. Same applies for creating content on mobile. Sure your desktop apps run circles around your mobile apps, but there are still times where creating or editing on mobile is just more convenient.

Q. Can I shoot tethered to it?

A. Yes and no. You can’t shoot tethered in the plug in a long USB cable sense, but you can wirelessly. I use my EyeFi card

all the time to see the shots appear on my iPad as I take them. Since the EyeFi is in the second slot, I’m not losing the ability to shoot RAW to the main card slot for importing once I get back to my desk.  Cam Ranger

is another GREAT solution for this even offering camera control wirelessly from the iPad.

Q. How do I get my RAW files into it?

A. You don’t and why would you want to? RAW files are big and even with the largest capacity iPad/iPhone at 128GB, it would fill up pretty quickly with importing RAW files. Also the misconception is that even if you bring in those RAW files (let’s say a few), you’d be editing them. The fact is that with the Apple Camera Connection Kit

you’ve been able to import RAW files almost since day one. However, what you see on screen and what the apps see is a JPG PREVIEW. A RAW editing workflow is a non-destructive editing workflow. There are no RAW editors on iOS that I know of because it doesn’t make since to do it there. Save your RAW files for when you return to your desktop. Or sync the RAW files with Lightroom Mobile and perform adjustments in Lightroom Mobile that apply to your RAW files when you sync.

Q. How do I color calibrate it?

A. When someone asks me this, I just rotate my head 90° (Family Guy Stewie style). Whaaaaaaat? If your workflow is color critical then you aren’t going to use a mobile device to deliver the final product (usually a print). If this is what you do, then no a mobile workflow probably isn’t for you at the moment.

Q. What about Illustrator and InDesign?

A. Just like there are mobile apps that compliment a Photoshop and Lightroom workflow there are mobile apps that compliment the Illustrator and InDesign workflow as well. Adobe Illustrator Draw is an Amazing app that lets you draw in vector and send it to Illustrator on the desktop if you need to work on it further. Using Apple Pencil will take this app to the next level. Adobe Comp CC is like having InDesign on your iPad or iPhone. You can use simple gestures to create your placeholders and then import the images from a variety of sources including Lightroom Mobile. You can do typography with real TypeKit desktop fonts. Once you’re done with your layout you can either post it as is or send the layered editable file to Photoshop CC, Illustrator CC or InDesign CC on the desktop. Adobe Comp CC is a secret weapon used by designers that get it!

Q. The Microsoft Surface Pro can run full desktop Apps. Why would I want to use mobile apps on an iPad?

A. The Surface Pro is a great solution for those looking to have a tablet and notebook all in one. Instead of running iOS or Android OS it runs Windows 10. However, if you want to run Photoshop CC, you’re going to want the 8GB Surface Pro 4 model at a minimum. That model starts at $1,299 without the keyboard. Well if we’re going to start at $1,299 then I could just go with a MacBook Air with 8GB of RAM for $1,099 (on sale for $999 right now by the way) that has a keyboard built-in. No it’s not a tablet, but at this point I’m not sure what you’re gaining by it being a tablet too since it’s running desktop apps, not mobile apps other than the the touch screen. But hey, if the Surface Pro is what you want/need, go for it!

Mobile creation, ideation and photography makes sense for a LOT of people. It’s not here to replace the desktop (at least not yet), but it certainly compliments in many ways that excite me. Best of all, all the Adobe apps mentioned above are FREE!