As a photographer one of the iPad accessories I was most anticipating was the iPad Camera Connection Kit. This kit consists of TWO adapters that connect right to the iPad's Dock connector. The first one is a standard SD (SDHC) Memory Card reader. You connect it to your iPad and then insert a memory card with images/videos on it and transfer those images to your iPad. No software to install because the iPad already has this ability built-in to the Photos App. The second adapter has a standard USB port on the oppositie end of the Dock connector. With this one you can not only connect your camera via USB and transfer images directly, but as my video above shows you can even use a Card Reader with it! This overcomes (although not as elegantly) the problem of wanting to use Compact Flash or other card formats.

The video walks you through it so I'm not going to spend a lot of time writing about it. I'm surprised at just how well it works though. My first test was an SD card right out of my Nikon D5000 containing RAW images on it and they came right in with no fuss. The next pleasant surprise was that the editing Apps (Photoshop.com Mobile and Photogene) had no problem editing those RAW files. Now it could just be editing the JPEG preview. I can't really tell, but hey it works!

How would you use this?

The most obvious use for this kit is to backup and review your photos on your iPad. When you look at the cost (still way over priced) of the Epson P6000, and what you can do with an iPad (beyond just backup and review) for not much more money (and even less money if you don't need as much storage), it's a no brainer. Also since the iPad doesn't have a built-in camera at this point, it provides iPad users with a way of getting images into their iPad more directly than having to sync them with their computer or use email/internet. I know this is obvious to many of you, but before someone asks, the images you import to the iPad can be sync'd back to your computer via iTunes/USB when you get back home.

What about Compact Flash? 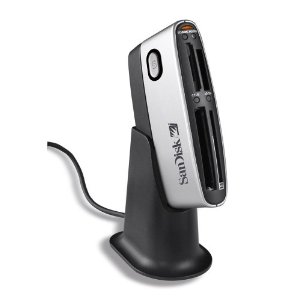 The kit doesn't natively support Compact Flash Cards or any other card format besides SD. However, as I showed in the video there is a work around. Use a card reader. Again it's not elegant, but it works. Here's a link to my favorite USB multi-card reader that I tested and found to work great with this kit.

Of course there are lots of cameras that shoot videos these days including DSLR. So video support is important too. I imported video from both my Nikon D5000 and my Kodak Zi8 cameras. 720p video shot with the Nikon D5000 imports AND plays back on the iPad. 720p video shot with the Kodak Zi8 imports, BUT doesn't play back on the iPad. This is not surprising since it seems that EVERY camera out there that shoots video shoots it using different codecs and formats. Since the iPad has a limited number of video formats that it plays back, you mileage will vary as to what works and what doesn't. Bottom line is that it all imports at least from a backup perspective.

After I shot the video above, I had two more ideas of things to try and they both worked! The first one was that I wanted to see what would happen if I not only connected my D700 to it, but I started shooting while it was connected. For a brief moment I got very excited thinking that they snuck in tethered shooting! sigh… upon further inspection, the images were showing up because they were being written to the card and I would still have to import them. So no live tethering. The second thing I tried was connecting my iPhone directly to it and bam it saw the iPhone as a camera and offered to import the 3 images sitting in my camera roll. Now I'm not sure that I would ever need to use the iPhone this way since there isn't much that I could do on the iPad that I couldn't already do with an image on the iPhone other than work on it with a bigger display, but it's cool to know that the option is there.

OK, two more things: Yes, as it turns out it also supports USB mics for audio input and USB keyboards. 🙂 Having USB mic support could be great for VoIP apps and using your favorite  mic/headset.

Importing Into LR From the iPad – UPDATE 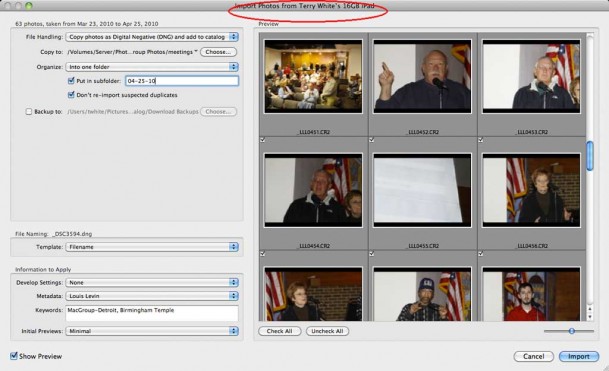 I got this question on YouTube so I decided to connect my iPad via the USB cable to my MacBook Pro and then I fired up Lightroom and yep, it sees the iPad as a source to import from and you suck the images right in without having to launch or use iTunes as an intermediate step.

This kit makes me much more likely to want to travel with my iPad because it can now do one more thing and that is backup my photos and give me a nice big display to see them on while I'm on the road/in the field. The fact that it supports RAW files is a huge bonus for me. I know what you're thinking: Wouldn't it be cool if we had Lightroom for the iPad? All I can say on that one is….. 😉

You can get the iPad Camera Connection Kit here from the Apple Store for $29.00. A real bargain considering all that it really does beyond just importing of images.