Happy New Year everyone! It’s a new year and I decided to give my blog a new look with a fresh theme. One of my goals this year is to do more blog posts. I had almost completely fallen off my blogging in favor of social media. However, as many of you know, social media has issues that if you don’t pay to boost your posts, most of your followers won’t see them. In other words, social media is not free. My blog is a platform that I can control and get my messages out to the people that are interested in them.

I’m wishing all of you a healthy prosperous New Year!

Having fun with the latest Tesla update:

What else is in this update?

END_OF_DOCUMENT_TOKEN_TO_BE_REPLACED 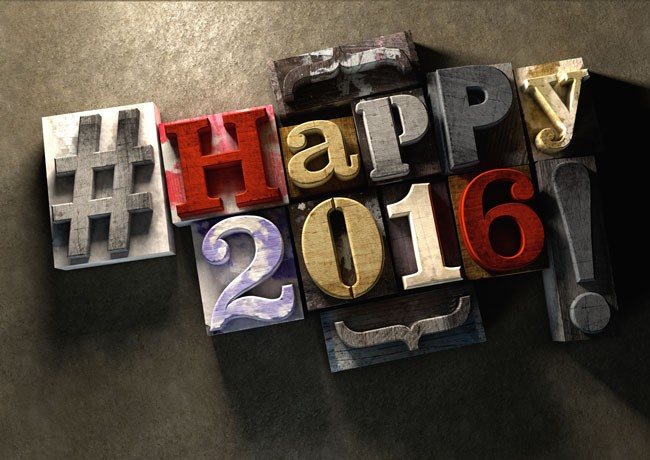 I wanted to take this moment to wish you and yours a very Happy and Prosperous New Year! May you stick to all your New Year’s Resolutions and may 2016 be better than 2015.

Looking forward to exciting things in the tech world this year. Thanks for your support! 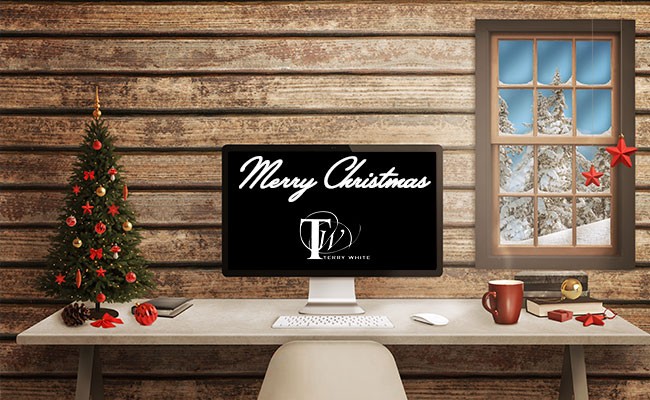 I wanted to take this moment to wish each and every one of you a very Merry Christmas and Happy Holiday Season! I also want to thank you for all your support and encouragement throughout the year! I wish you the best for 2016!

May all your tech, design and photographic Christmas wishes come true! 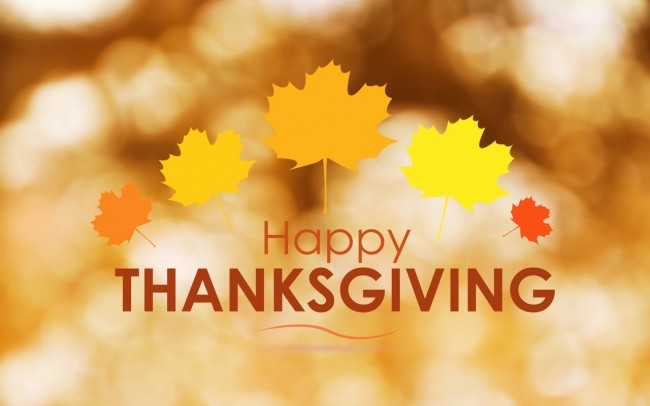 I want to take this opportunity to wish EVERYONE a very Happy Thanksgiving!

I have a LOT to be thankful for and one of the things that I’m most thankful for is the overwhelming amount of support that I receive from my readers and fans. Enjoy time with your friends and family.

If you get into the whole holiday shopping thing be sure to come back tomorrow to take a peek at some hand picked Black Friday Gadget/Tech Deals. I would ask that you not give in to the desires of retailers today and not go shopping on Thanksgiving. Black Friday is starting to become Black October and November and there’s really no reason that the deals can’t wait until Friday. 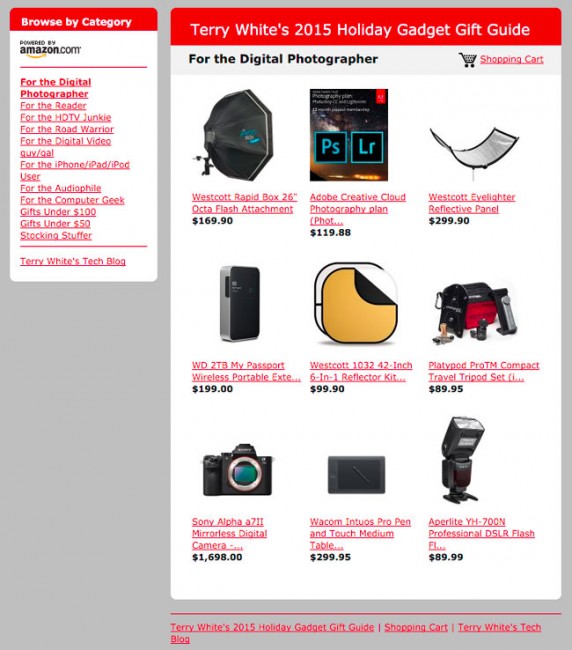 That’s right it’s my guide to help you with you holiday shopping for the gadget lover (freak) on your list. The way this thing started was each year towards the holiday season all my friends started asking me and emailing about what my picks were in various categories and of course the answers were usually the same. So I decided to compile a list and just email it to the folks that asked.

Once again I’ve put together a Holiday Gadget Gift Guide to help you pick out gifts for the techies and gadget lovers on your gift list. I’ve chosen Amazon.com simply because they are the one online retailer with not only the largest presence, but also the one that carries 99% of the items I recommend. Another advantage is that I can continue to add things that come up all the way up to the final days of the holiday season. In previous years I would always find some cool gadgets after the static gift guide was published.

Something NEW This Year! 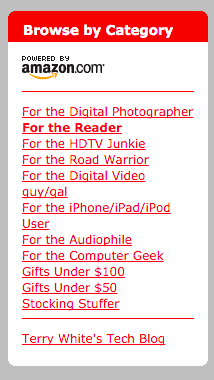 I’ve simplified my guide this year. Instead of including dozens of products each year (yeah it was overwhelming to me too), I’ve selected only the TOP 9 Products in any one category. This forces me to only pick the BEST items for my gift guide and makes it a whole lot easier for you to pick a gift.

How did you pick the items that you recommend?

Simple! If it’s in my guide it’s because I either use it now, have used it in the past or one of my close friends or colleagues use it and I trust their opinion. Now in some cases there may be an item in the guide that is NEWER than the one I use and I had to list that one because my model is no longer available. Unless I’ve used it or know someone who has, it doesn’t get in PERIOD.

How does the gift guide work?

The guide is broken out by Category so that you can shop accordingly. This way you can pick your gift by the kind of person you’re shopping for. I know that sometimes you have to buy a gift based on a certain dollar amount or budget (like gifts for co-workers), so I’ve given you a couple of dollar amount categories too. Happy shopping and in case I don’t see you later, Happy Holidays to you and your family! You can go straight to my 2015 Holiday Gift Guide here.

While the guide above has my TOP PICKS for 2015 that I like and would recommend, here are my Top 10 picks for BEST GADGET GIFTS OF 2015:

END_OF_DOCUMENT_TOKEN_TO_BE_REPLACED 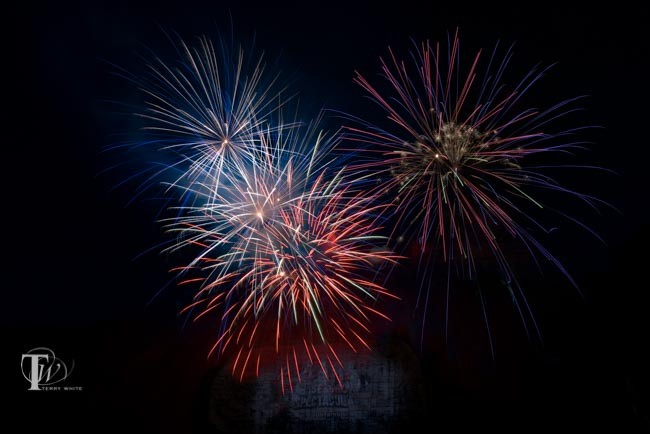 First off Happy Independence Day 2015! I know that many of you will go out and shoot fireworks this weekend. I started a little early shooting last night. Believe it or not it was my first time shooting fireworks professionally. I just hadn’t been to a fireworks display with  my gear in all these years. The last time I remember trying to photograph fireworks was years ago and it was a disaster because I made the amateur mistake of trying to photograph them handheld. Every shot was a blurry mess. A few years back my buddy Scott Kelby was looking for a topic to blog about and I said why don’t you blog about “how to shoot fireworks”? He resisted at first, but then he did it and it was such a hit on his blog he has done it every year since. Every year I refer to his post just in case I’m get a chance to photograph fireworks and this year I actually made the time to do it. I figured I had several nights to try since fireworks here in Atlanta take place in different places all weekend long.

What you’ll need and the settings:

It will work best if you have a camera that can shoot in manual mode. Sure some cameras have Scenes and even “fireworks” modes. If you want to play it totally safe by all means use one of those modes. However, if you want to have complete control, shoot in manual mode. Next and I can’t stress this enough, you’ll need a tripod. Don’t even waste your time trying to do it without one unless you’re just doing it for the fun of it and don’t expect to have “great” shots. Ideally you’ll also want either a wireless trigger for your shutter or a cable release. This will help by keeping your hands off the camera and reducing vibration as much as possible. Here are the settings you’ll want:

Which lens? I fully expected to use my 70-200mm f/2.8 telephoto lens, but actually I was closer than I expected to be and I was glad that I brought my wide angle 14-24mm f/2.8 lens. I would recommend either a lens with a variable focal length like a 28-300mm or bring both a telephoto and a wide angle so that you’re covered depending on your location.

After having those settings drilled into my head all these years I thought it would be a piece of cake. However, last night I realized two things about shooting fireworks: #1 Unless you’ve sat though the exact same show before, you have no idea what’s coming when. Shooting fireworks is kinda like shooting sports. You have to anticipate where the action will be and be ready for it. 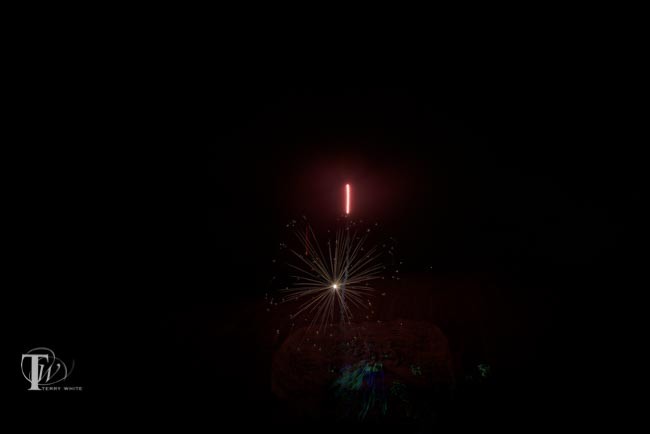 I had plenty of misses like the one above. Four seconds is a long time before you can press the shutter again. #2 and probably the thing I least expected is that fireworks shows can suck sometimes. We have to realize that fireworks shows cost money. In many cases you’ll see lots of what I call “streamers”. They go up and leave a trail of light, but no big pretty explosion at the end. 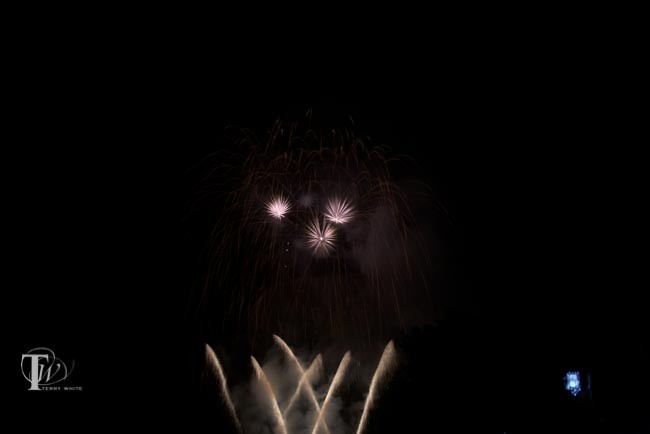 It doesn’t cost you to shoot more pictures digitally, but what this really means is that you’ll only have a few chances to get the really “pretty/spectacular” ones. Yes there is usually a finale at the end, but it only lasts so long, If you haven’t gotten your timing together by then you’ll blow it. 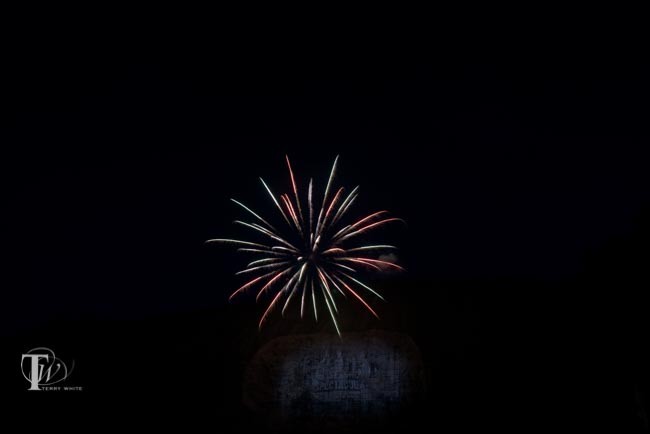 I got some “good” shots, but I wanted some “awesome” shots like the ones I see in magazines and on TV. Then I realized that I can cheat a little. I have a few good shots that could be combined in Photoshop to make an “Awesome” shot like the one at the beginning of the post. 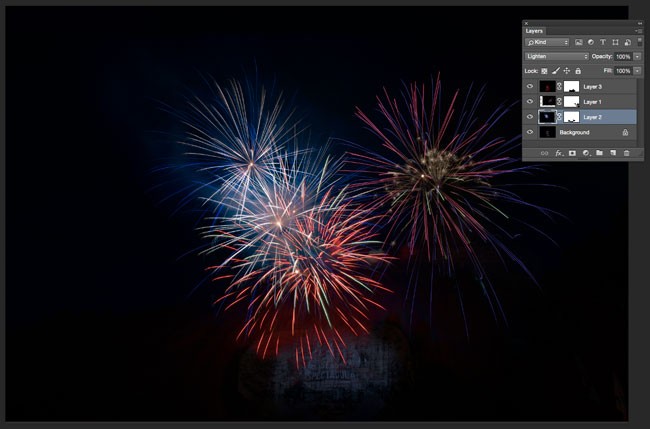 I combined 4 of my “good” shots into one composite in Photoshop CC 2015. I simply put each one on a separate layer and set the Layer blending mode to Lighten. This got rid of the black sky and left me with just the fireworks that I could then move into any position I wanted. I used a layer mask to mask away the remnants of the laser show and ghosting of Stone Mountain.

I wasn’t a fan of the smoke surrounding what would have been a nice shot. With Adobe Photoshop CC 2015 it was even easier with the NEW Dehaze feature in Adobe Camera RAW and better yet the Camera RAW filter. I was able to take this shot: 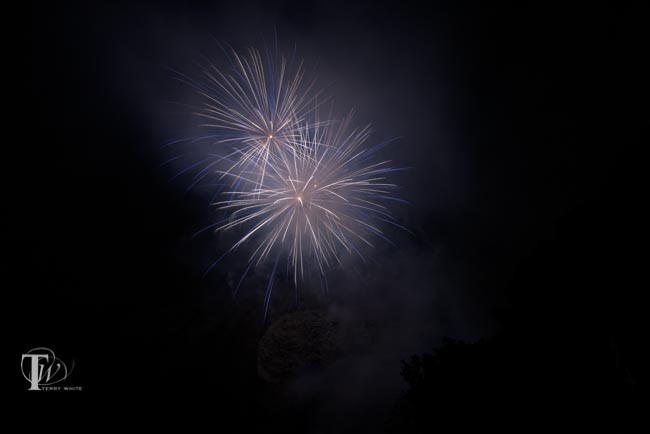 While it was a layer in my composite I simply ran the Camera RAW Filter on it in Photoshop CC 2015. 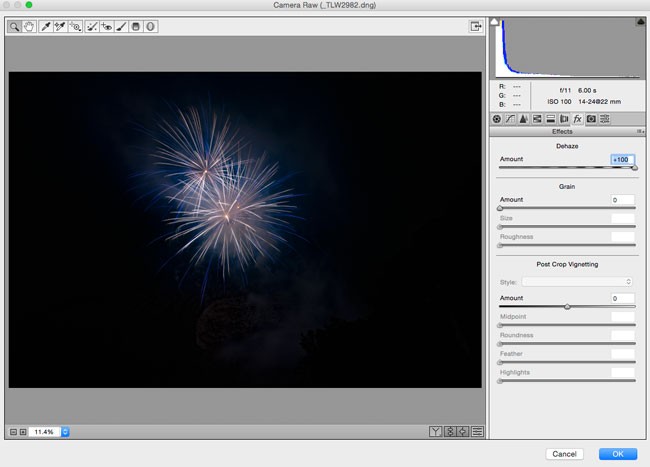 Dehaze only got rid of so much of it in the first pass. Since it’s a filter I could simply apply it two more times and turn it into this shot: 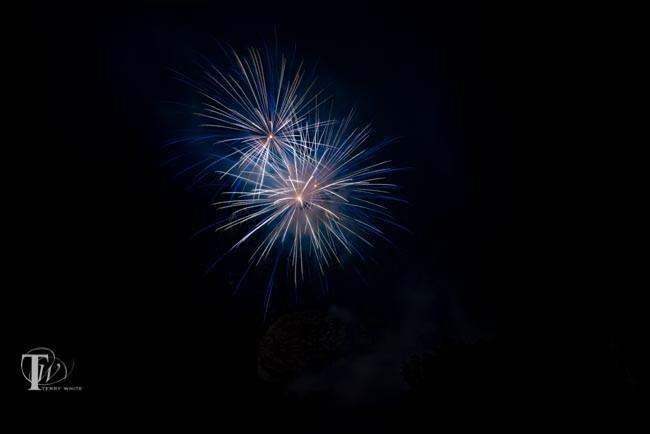 I was quite pleased with the results. 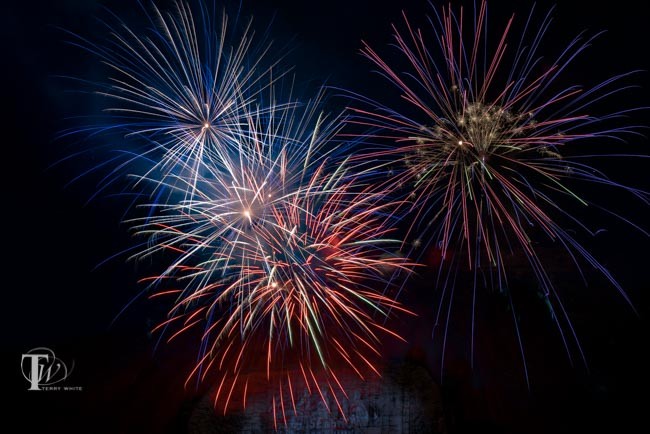 Go out tonight and have some fun shooting and celebrating the 4th of July. Always remember that we have Lightroom and Photoshop to make great shots even better. If you want to check out Scott’s post you can here. 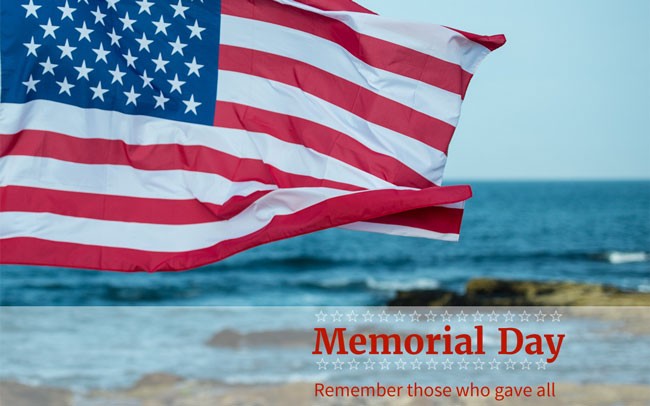 As you enjoy this day with your family and friends let’s not forget that this is the home of the free because of the brave. 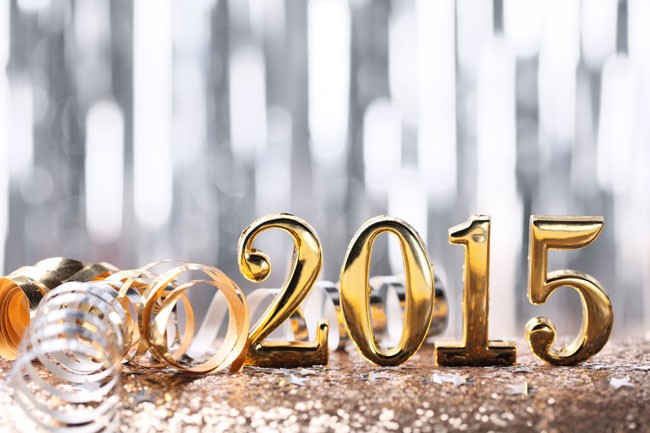 I want to take this moment to wish you and yours a very Happy New Year! 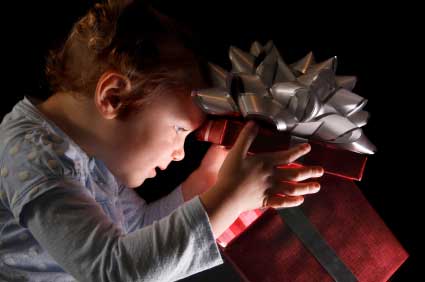 It’s that time of year again. My annual “So what’d you get?” I’ve been reviewing my favorite gadgets, services and photo gear all year long. Now it’s your turn! Tell us what you got this holiday season (tech wise) that you’re excited about? Use the comments section below. Tell us what it is, why you like it and provide links if you can? Did you get or give anything from my holiday gadget gift guide?

END_OF_DOCUMENT_TOKEN_TO_BE_REPLACED 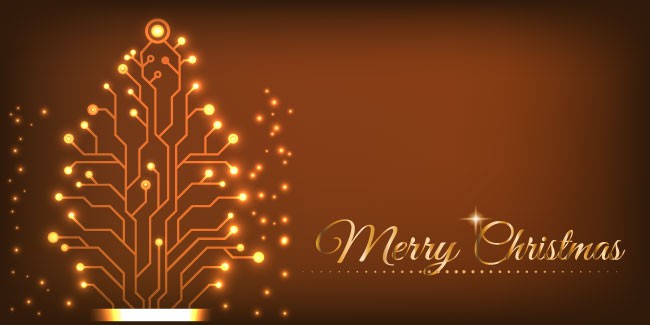 just wanted to take this opportunity to not only wish you and your loved ones a very Merry Christmas and Happy Holiday Season, but also to thank you for all your support and encouragement throughout the year! I wish you the best for 2015!

May all your tech, design and photographic Christmas wishes come true!