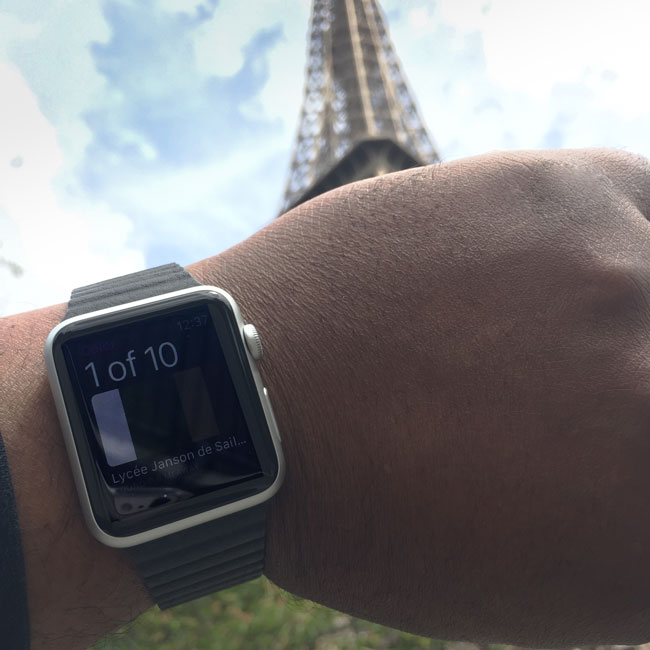 Whenever a stranger notices that I’m wearing an Apple Watch, the 1st thing they usually ask is “do you like it?” I always find this question to be a bit awkward because I guess if there was something as personal as a watch or other wearable item that I didn’t like, I probably wouldn’t be wearing it. It’s like saying, hey those shoes you’re wearing, do you like them? However, I get it. It’s a hot new tech gadget with a lot of hype that they’ve heard something about or perhaps are interested in possibly getting one and it’s probably the first question that comes to mind. To answer the question for the record, YES, I love it! Now with that said, it’s a 1st generation Apple product and as history has always shown us it will get better with each iteration. Think back to iPhone 1.0 in 2007 and iPad 1.0 in 2010. I loved those products too, but could never imagine going back to those first models now that the newer ones are in hand. I expect to have the same feeling about Apple Watch 1.0 in a few years. But for now I’m very happy with it.

The next question I get and this is another odd one for me to answer is “Is it worth it?” Again, it feels kinda personal. I usually answer with the truth “yes, it’s worth it to me!” I can’t answer if it will be worth it for you or not? I have no idea what you consider to be of value and what your limits are? Some things that you would spend money on I would probably find not to be worth it to me. However, for the record the answer is YES!, it’s worth it (to me). My #1 measure for answering this question is, if something were to happen to it or if I could go back in time knowing what I know now, would I buy it again? hmmmm, Yes! My only debate would be would I buy the Sport model again or would I step up to the stainless steel model. I chose not to go with the more expensive models knowing that this is a first generation 1.0 product and that when 2.0 comes out then I would spend more on the sure to be thinner model with all kinds of new bells and whistles. I do want a stainless steel one and I’ve had to close my browser window a couple of times when I was tempted to just go ahead and order one, but I’ll wait.

I would have to say that I was a bit frustrated when one of my viewers on Periscope (follow me @TerryLWhite) asked me about Apple Watch during a live broadcast from Milan Italy last week. I know that the viewer didn’t mean anything wrong by the question, but I was a bit taken back by the question during that particular moment because I was showing this beautiful scene from the top of the Milan Cathedral. The beauty, the history, the architecture, the wow factor and out of the blue “has the Apple Watch benefited you on this trip?” Huh? Really? You want to talk Apple Watch now? Right now? Are you seeing this? So I was a bit snippy with my response and for that I apologize. He didn’t deserve that and his curiosity was genuine. There was nothing wrong with the question. I actually felt bad afterwards. For that reason, I thought why not answer the question in detail with this blog post?

Using Apple Watch on my trip to Europe 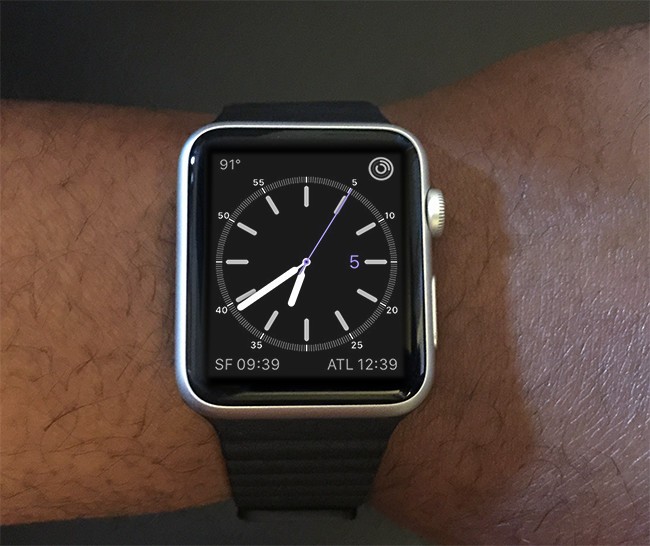 Although I had traveled with Apple Watch from day one, this was my first trip abroad with it. I would say that the first thing I like about traveling with Apple Watch is that it changes the time based on where you are just like your iPhone. So I never ever have to set it. Last week I went to the Netherlands, Paris and Milan. The first thing I thought about was what information would I want to see at a glance every time I looked at my Watch? Apple calls the 4 customizable corners of Apple Watch “Complications”, not sure I would have used that term, but that’s what they are called. Also my buddy Jack just pointed out to me that Complications is the common term used for describing features of clocks beyond the time display. Learn something new everyday. My daily 4 complications were Weather, Battery Status, Activity (like a fitness band) and the Central Europe Time Zone (Paris time). I customized it by replacing Battery Status with Pacific Time and changed Paris time to Eastern Time (my home time zone – Atlanta). I also set the default to 24 hour (military time) since that’s what the rest of the world uses.

Speaking of Battery Life… I no longer display the battery status on my watch because since day one battery has NEVER been a problem for me. Not one time in 45 days have I run out of juice. I think the lowest the battery has been when I put it on the charger at night was 30% left. It actually averages between 40%-60% left each day. Since battery life has never been an issue for me, I figured why waste the space displaying the status at all times? I can always use the battery “glance” if I’m ever curious to how much juice I have left. While Apple states that you’ll get 18 hours of battery I have actually gone over that for the 1st time on this trip. I put my watch on at 8:00 am the day I left and didn’t take it off till the next afternoon in the Netherlands at 1PM, 23 hours later! I also kept it active on the 7.5 hour flight because the Delta 747 that I was on had WiFi. No need to go into Airplane mode. Apple Watch battery life is much better than expected! 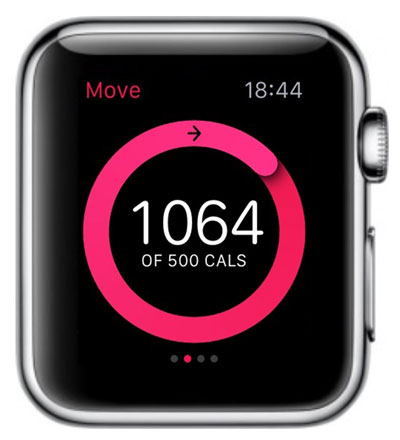 After setting up the perfect watch face display above, the next thing was the Apps themselves. Some were very useful on this trip. I’ll start with the ones that are built-in. I love that Apple Watch shows me incoming calls. This is even more important when traveling abroad as calls can be costly. At a glance I could see who was calling and even better, if it was a call that I didn’t want to take I could just cup my hand naturally over the Watch to silence the incoming call and send it . This is a pretty sweet feature. The next one that was extremely nice was the Activity monitor. I did a LOT of walking around on this trip and it was great hitting/exceeding my daily Move and Stand goals. I used to wear a Nike+ Fuelband on one arm and sometimes a nice Marc Jacobs watch on the other. Now I have Apple Watch that gives me both a nice watch and fitness tracker in one. Speaking of it being a watch, people seem to be really impressed when I raise my arm to see what time it is and the Watch displays the time. This is what bugged me about using all other digital watches (including the Nike+ Fuelband) in the past is that you had to use your other hand to press a button to activate the display. There is no button to press thanks to the built-in accelerometer. 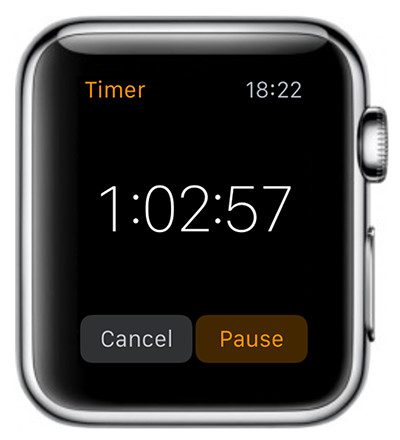 The Timer was awesome to use. This was a work trip and I had presentations to do in each city. Normally I’d use a presentation timer on my iPhone, but more and more I’m using my iPhone as part of the demo to show mobile Apps. This lead to my using an iPod touch for music and to run my timer apps. I didn’t take the iPod touch out of my bag one time on this trip. The watch made a great timer. At a glance I could see how much time I had left and if I got carried away the taptic feel of the timer tapping my wrist when my time was up was PERFECT. Although I didn’t have slides to present during this trip, I have also used the Keynote App on Apple Watch as a wireless remote to advance my slides from my wrist. It was great to use the timer for the flight home. This way I was able to see how many hours I had left at a glance. 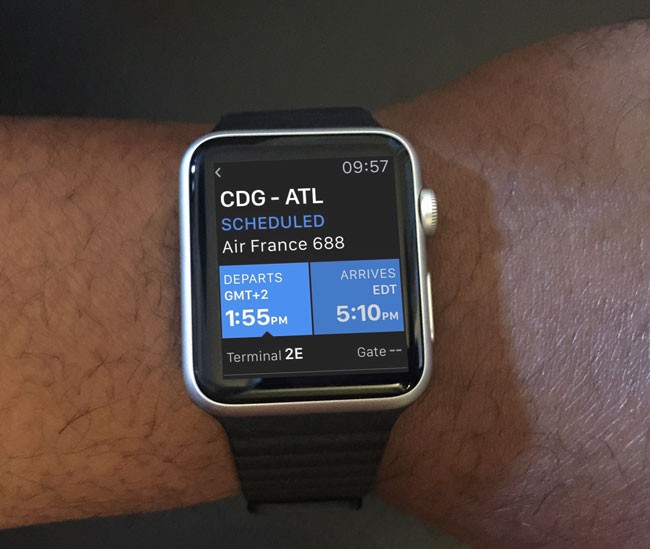 There was one 3rd party app that stood out. If you want to see the 3rd party Apple Watch Apps that I like the most, you can see the full list here. However, the one for travel that was great to have was FlightTrack 5. All of my flights were loaded in via my iPhone 6 Plus and therefore available at a glance on my Apple Watch. I could see any flight updates, delays, times, etc.

I also liked using Adobe Color CC to collect the most popular color themes from each city. I’m becoming a fan of ProCamera 8 + HDR and their iPhone app now includes an Apple Watch app that not only gives you a remote shutter release from your Watch, but also a quick review of the images that you just took so that you can stay in place and shoot again if need be. 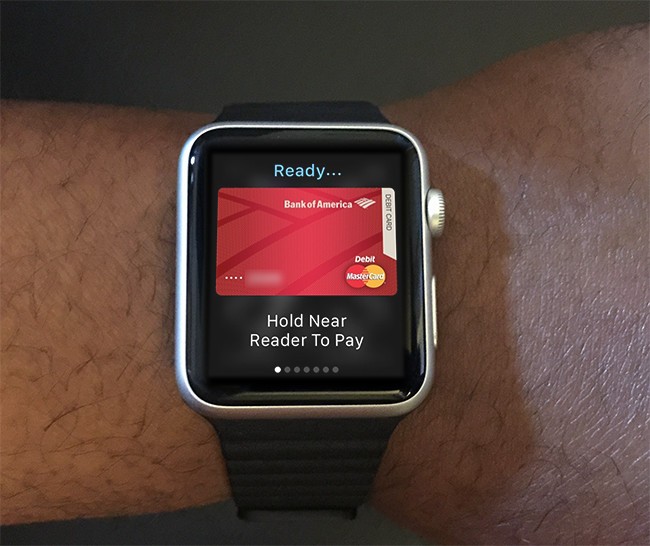 During my stay in Paris I went to lunch at the underground Mall next to the Louvre. Nice Apple Store there by the way. The food court had a variety of restaurants. I noticed that when I went to pay for my meal, the familiar touchless payment symbol appeared and I thought, why not try it. Two taps of the side button and my Apple Pay was ready. All the cashier kept saying was “wow, wow, wow”. Apparently I was his first Apple Watch paying patron. Or maybe that was all the English he spoke 🙂 . 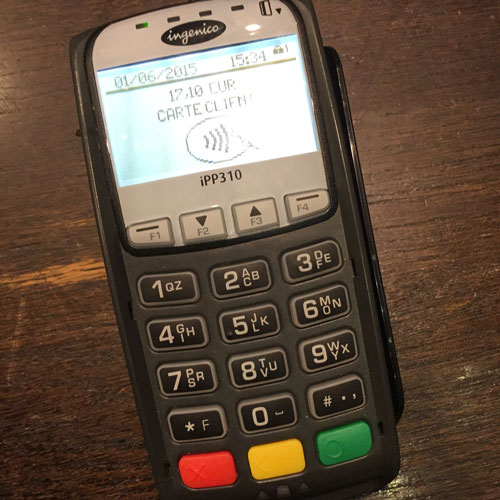 I used Apple Watch in a way that I never would have thought about before this trip. It seems that in several public places in Europe that if you want to use the restroom you actually have to pay € .50. 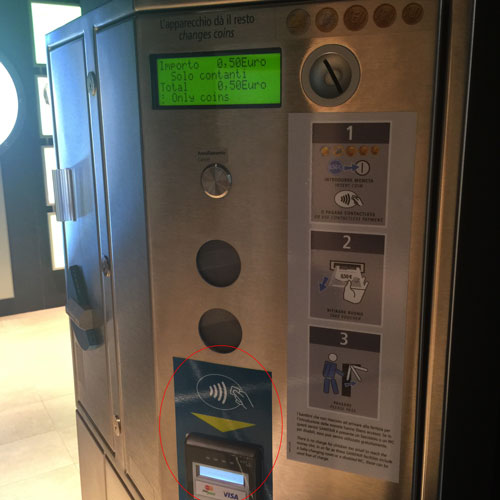 While that’s not the end of the world, it was frustrating the first time when I didn’t have any change. The next time, I saw one I noticed that it took Apple Pay (contactless payments via NFC in smartphones and Apple Watch). Now Europe just needs to update their train stations to take touchless payments and it would be a lot easier, faster and a more secure way to pay for tickets. 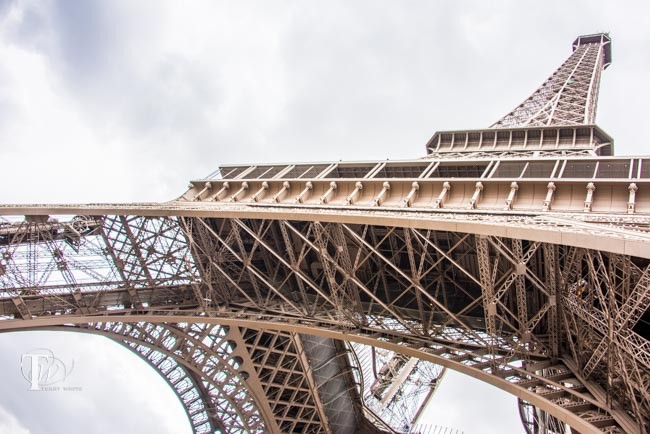 The Apple Watch is far from perfect, but for what it is right now as a 1.0 product it’s GREAT. It does the things that I bought it for and if I had it to do all over again I’d buy it again. For every day use it has been a natural fit into my lifestyle and for travel it’s been great to have the things I want to know about the most at a glance. I look forward to the 3rd party Apps gaining access to the native functions of the Watch in the upcoming Apple Watch SDK. I have a whole drawer full of traditional watches, but Apple Watch is the one I enjoy the most. Apple Watch is a great product that will only get better over time. 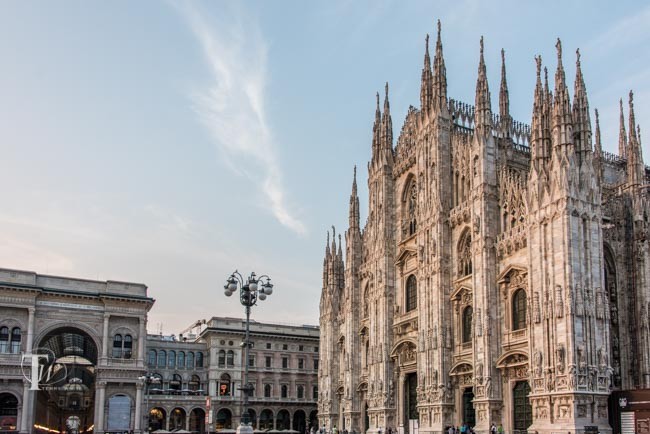