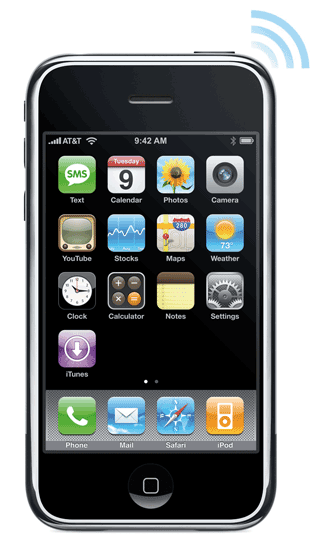 While I can’t take credit for the idea (wish I had thought of it), I have never heard anyone mention it before as it relates to the iPhone. I was reading a post on engadget.com about a new phone (I don’t even remember which one it was), but it had a feature that would be KILLER on the 3g version of the iPhone.

Here goes: Most of us that travel with iPhones also travel with laptops. One feature that we hope for on the 3g iPhone is to be able to use it as a wireless modem (tethering/DUN) via Bluetooth. However, what would even be sweeter is having the iPhone itself become a Wi-Fi access point. Having a 3g iPhone means that we’ll have the potential for significantly faster data access than what we now see over EDGE. Since the iPhone already has Wi-Fi built-in, why not just tap a button, set a password and have it broadcast a Wi-Fi access signal that you could tap into with your laptop and surf?

Of course there’s the whole battery life thing and I have no idea if the Wi-Fi radio uses more power than the Bluetooth radio, but it would be pretty sweet nonetheless. It would also allow multiple devices to share the 3g internet connection simultaneously whereas Bluetooth would not.

Either way, the next version of the iPhone should definitely have either Bluetooth or Wi-Fi internet sharing for your laptop! Steve would probably argue that the iPhone is so good that you shouldn’t need to connect to the internet from your laptop and maybe with all the new corporate support (MS Exchange support, VPN access, etc.) that’s coming in iPhone 2.0 he’s right. I can’t wait til June to find out!

You may remember that I have a running list of features that I would like to see come to the iPhone (some of which have either been addressed in recent updates or have been announced for the 2.0 software update due in June) and all of which could be implemented via software updates or 3rd parties. So while were on the subject of the 3g iPhone, here are my:

8 Replies to “A really cool idea for the 3g iPhone”