I’ve been waiting for a long time for a cable compatible HD TiVo branded DVR. When TiVo first announced the Series 3 HD DVR I cheered until I saw the price! At $1,000 I thought, "they must be nuts." There was no way that I was going to spend that kind of money on a DVR. So I waited. Now I’m glad I did! TiVo recently started shipping their New TiVo HD. I’m a Comcast digital cable customer and have suffered through more Motorola branded DVRs than I care to think about. Not only is the Moto box no where near as elegant or as full featured as the TiVo branded DVRs, it’s also no where near as stable. My Comcast DVRs lock up regularly (not as much lately as in the past, but I have a funny story about a recent lock up that I’ll cover further down this post). You might think I’m crazy, but I also have DirecTV service too. Why two services for digital TV? Because I got hooked on DirecTV plus TiVo years ago and have never wanted to give that up. So my main recording happens on these ancient DirecTV TiVos (which are no longer being produced) and my HD recording happens on the rented Comcast boxes. I could have gone HD with DirecTV, but at the time I considered it, they didn’t have local stations through the dish and they also had their own DirecTV branded DVRs (not TiVo). So I decided to just do HD through Comcast for now which is also my internet provider.

I started hearing rumors that TiVo was coming out with a lower cost HD DVR. Well that rumor came true. The New TiVo HD is just what the doctor ordered. It goes for $299 and connects directly to your cable service without the need for a cable box. However, in order to receive your digital channels, HD channels and premium channels (like HBO), you will need not one, but two CableCARDs. You could get by with one CableCARD, but then you would only be able to record one show at a time. With two cards you can record two shows on different channels at once. You will have to get your CableCARDs through your cable provider and if that is Comcast, that means scheduling an installation appointment (at least last time I checked, they don’t give these out over the counter).

That’s like saying, why Macintosh? Why BMW? Why an iPhone? Although you can get pretty much the same basic functionality out of any DVR, the TiVo interface (experience) is second to none. They pretty much invented the category and I haven’t had a single issue out of YEARS of use of my TiVo branded DVRs. They just work and the interface is both elegant and well thought out. If you have no appreciation for an elegant UI, then any DVR will probably do you just fine.

What’s the difference between TiVo Series 3 and TiVo HD?

About $700! 🙂 On the serious side the price of the TiVo Series 3 has steadily dropped in price, however at my last glance over at the great folks at Weaknees.com, the Series 3 box is still going for $649 which is still too much for a DVR even if it is a TiVo. The main difference between the Series 3 TiVo and the New TiVo HD is the Series 3 TiVo has an OLED digital display on the front, it’s THX certified, has general navigation buttons on the front and a better remote control. The Series 3 also does 30 hours of HD recording as opposed to 20 hours of HD on the New TiVo HD and the Series 3 includes an HDMI cable (see a complete side-by-side comparison here). The differences are not worth twice the price – to me! 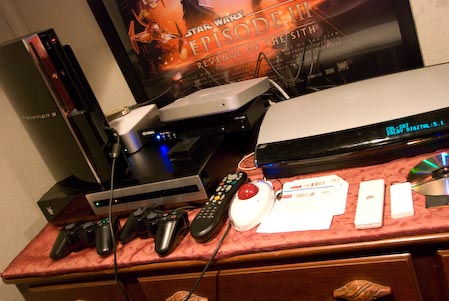 This TiVo is for my home theater. My TiVo HD arrived a couple of days ago and I immediately called to schedule Comcast to come out and do the CableCARD installation. I knew from previous experience with a CableCARD install on one of my HDTV’s that I better plan plenty of time for this as the folks at Comcast don’t seem to have their act together when it comes to CableCARD installs. In the meantime I opened the box to check it out and it’s a good thing I did. I read the setup card and it takes about 30 minutes total to get the TiVo setup BEFORE the CableCARDs get installed. This way I was able to have it ready to go when the Comcast guy showed up. Installation is really simple. I basically plugged in my HDMI cable, digital audio cable to my receiver, the Comcast coax cable and I also opted for the TiVo Wireless G USB Adapter which allowed me to put the TiVo HD on my Wi-Fi network instead of having to plug it in to Ethernet or worse, a phone line. Everything worked perfectly and the menus walk you through every step of the setup.

I was up and running with basic cable and just had to wait for the CableCARDs to come. The guy showed up in the timeframe that Comcast setup (at the tail end of it, but within the timeframe nonetheless). I could tell that he was visibly annoyed by this job. These guys HATE installing CableCARDs for a couple of reasons, one they don’t know much about them and two they really don’t have any control over whether they work or not. After they plug them in they are at the mercy of the home office which has to configure them remotely. Having to get TWO of them working only frustrated this guy more. You would think it would be an easy process, however it literally took TWO HOURS to get them working! The first card showed up and they eventually got my digital channels working but not my premium channels. Of course during this process you try removing the card and re-seating it and switching cards and slots. We learned that it’s not a good idea to remove the card. When you remove the card it changes one of the configuration numbers and each time we tried removing, reseating the card the office wasn’t aware of the change in HOST ID numbers. So that probably made this install take longer than normal. Once we left the cards in place and the call was escalated to their "last resort" guy, he was able to successfully configure both cards and get all channels working.

FUNNY STORY – The installers are mandated to also check out your existing Comcast digital boxes before they leave to make sure that you can receive ONDEMAND programming. So he goes to my living room set. I turn it on for him and hand him the remote. Although there is a show going and sound, the box doesn’t respond to the remote. I look down at the clock on the display and it was frozen. Sure enough the box was locked up. I just started laughing and said "this is why I’m replacing your boxes!"

A lot has changed since DirecTV TiVos!

I was floored by the array of options on this new TiVo. Keep in mind that I skipped the whole Series 2 line. So much of this is new to me. The TiVo HD has everything the Series 2 had except TiVoToGo. I’m a little bummed by this, but I knew it going in. TiVoToGo would have been nice to move shows to my iPhone in an easy manner. However, I didn’t have this with my older TiVo’s either, so nothing has changed in that regard. Currently I just record the shows I want to take with me using an attached DVD-R recorder and away I go.

I’m also impressed with the Amazon Unboxed option which allows me to rent or buy and download Movies directly to your TiVo from Amazon.com. Although I’m pretty happy with Netflix, it’s nice to know that I can grab a movie online in a pinch. The biggest new feature for me (not new for Series 2 users), is the ability to program the TiVo HD from the internet to record shows. There have been times when I’ve been on the road and forgot to set the DVR to record something. If there was no one home to do it for me, I was just out of luck. Now it’s as easy as going to the TiVo.com page and logging into my account which displays the guide. From there I can set a show to record or even setup a Season Pass. I even tested this from the iPhone and it worked. I love it! 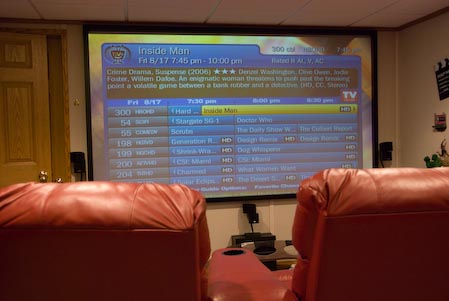 my home theater with the TiVo HD guide on screen

Although this NEW TiVo HD DVR is less than the ridiculously priced TiVo Series 3, it’s still not cheap and faces the competition from Cable and Satellite providers that either rent or give away their DVRs. Granted I was paying $10/month to Comcast to rent their crappy Moto box, I’m still having to pay them $10/month ($5 each) for the CableCARDs. Also I now have to pay for TiVo service which at the lowest price (pre-paying $299 for 3 years – 1 year free with current promotion) it’s still $8.31/month. So this on top of the Comcast cable service and you’re paying a small fortune for the convinence of TV in HD when you want it. However, TiVo is that good and I don’t mind the cost. As a matter of fact I’m eyeing the DirecTV TiVo box in my bedroom as the next spot for another TiVo HD box. It is the last room in my house that still has a CRT standard def TV. I’ve been wanting to replace it with a LCD HDTV, but waiting for a decent DVR has been holding me back. Now I can move forward. Oh oh, another visit from Comcast on the horizon – yippee!