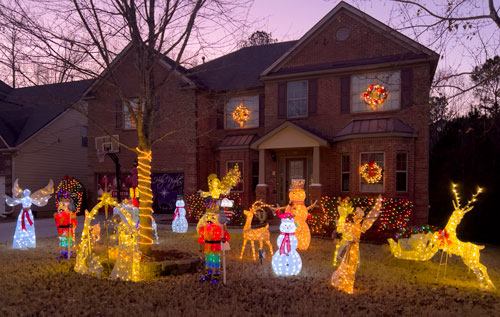 Most people that know me, know that I love smart home tech. I’ve been building my ultimate smart home since 2016. One of the things that I hadn’t done yet was to make my outdoor holiday lights smarter. I had been using a simple outdoor plug that turns on at dusk and off at dawn. However, If I wanted to turn them on or off at any other time I’d actually have to go outside and do it manually.

I got one of these when it first came out earlier in the year to automate the lights on my back patio. I knew then I’d want another one for the winter holiday season for the front lights.

What makes this one special?

END_OF_DOCUMENT_TOKEN_TO_BE_REPLACED

I recently added three new items to my smart home. The first one is one I’ve been waiting for the longest. When my home was built in 2016 I went with a Ring Pro doorbell. It was a good choice at the time and has worked well for me. However, my smart home platform of choice is Apple’s HomeKit and Ring is not native to HomeKit. While I was able to integrate it through unofficial HomeBridge support, HomeBridge doesn’t give it all the available features of HomeKit and now HomeKit Secure Video. While there have been a couple of entries into the HomeKit video doorbell market, one is extremely expensive and the other one doesn’t yet support HomeKit Secure Video. That all changed last week with the introduction of Logitech’s Circle View Wired Doorbell.

Logitech is no stranger to HomeKit. Their Logitech Circle cameras are in use and loved by many, but this is their first entry into the video doorbell market. Sometimes it’s better not to be first. By taking their time they got many things right out of the gate that others still struggle with. First and foremost this doorbell not only supports HomeKit but also supports HomeKit Secure Video which is Apple’s locally encrypted video stored in iCloud. Most others promise this feature in an upcoming software update or not at all. Logitech built it in from the start. They also did a great job including everything you would need including a choice of mounting brackets.