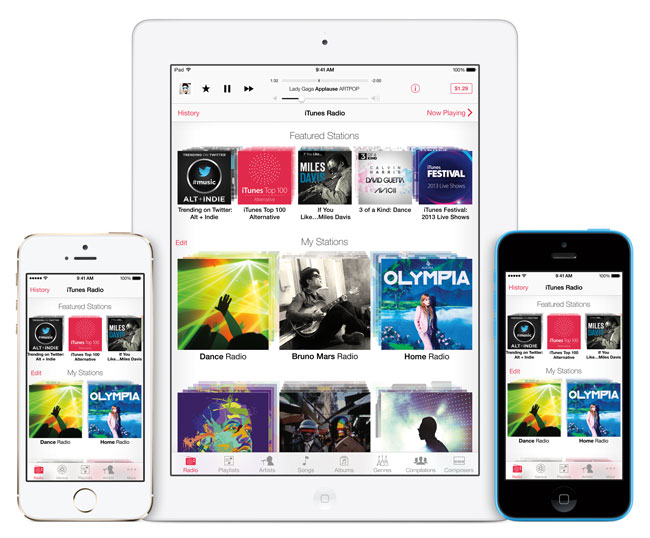 I was one of the ones anxiously awaiting the arrival of iTunes Radio. Before iTunes Radio I was a paid user of Pandora Radio. While Pandora does offer streaming Internet radio for free, I paid to avoid hearing ads. I like Pandora, but the beauty of iTunes Radio is that it would integrate right into iOS 7,  iTunes on Mac/PC, and Apple TV. Like Pandora you create stations from your favorite artists, songs, genres, etc. iTunes Radio will sync all your stations to all your devices automatically via iCloud. The interface is pretty clean and consistent for the most part. 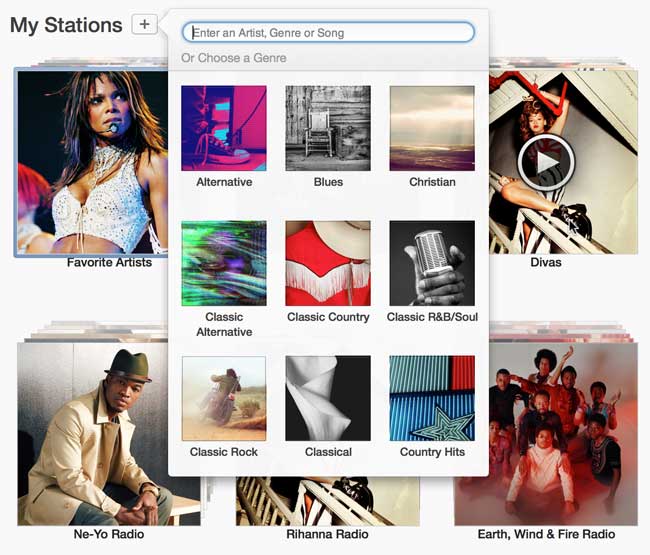 It was really easy to get started. Launch iTunes Radio on an iOS device or go to in iTunes and tap/click the + sign to add a new station. Key in an artist, song, genre, etc. and you’re done. You can add additional artists, songs, etc. if you like. I also LOVE the ability to add artists that I NEVER want to hear! (Justin Bieber). I don’t know if there is a limit on the number of stations you can add, but I was able to add in several with no problem.

The audio quality is excellent and I’ve used it both on WiFi at home and 4G on the road and in my car with no problems or skips. I did have one problem station that I ended up deleting and recreating. It actually got stuck playing the same 3 songs in a row over and over again. Once I got my stations sorted out with favorite artists and artists to never hear from, I have been using it every day. I have noticed that it does play a lot of the same songs repeatedly, especially when starting out at the beginning of my day. It seems that only after I’ve listened for a while (at least 3 songs) do I start to hear new songs. Luckily the songs it repeats are ones I really like.

Skipping Tracks and Thumbs Down

You can skip up to 6 tracks per hour per station. This is similar to Pandora. Due to the licensing restrictions from the music industry you can’t just keep skipping songs until you hear the one you want. One of the odd interface things in iTunes Radio is that at first glance there doesn’t appear to be a way to thumbs down or tell it that you never want to hear a particular song again. You CAN do it! However, it’s oddly hidden under the Star icon. At first glance I figured the Star was to mark songs that I like (thumbs up). It wasn’t until I tapped on it on my iPhone and discovered that it’s actually a menu that contains the choices “Play more like this”, Never Play this Song” and “Add to iTunes Wishlist”

Your stations can also be shared with your friends and family or on social media. You can also turn on/off explicit lyrics.

Costs and The Bottom Line

Like Pandora Radio, iTunes Radio is FREE with Ads. However, if you are an iTunes Match ($25/year) customer (and I am) then you won’t hear ads on the devices that you have set up for iTunes Match! This works out to be a cost savings for me ($3.99/month) since I already had iTunes Match  and was able to stop my Pandora Radio subscription. If you hear a song you like and want to buy it there’s a button in the upper right corner that lists the price. Just tap it and buy the song. Also each station keeps a “recent” history so that you can go back through and see which songs have played and buy them if you like.

While I like the potential of iTunes Radio and how it’s integrated into all my devices, it will take a little more time to see if the music really works itself out. I have used Pandora Radio for over a year and with the thumbs up and thumbs downs that I’ve done over the past year, I could listen to Pandora for hours on end and hear music that I liked. It will take time to train all my iTunes Radio stations the same way.

As far as improvements go, I’d love the ability to restrict a station to only songs from a particular artist. I’m sure this is probably against the licensing agreements, but it would be nice.