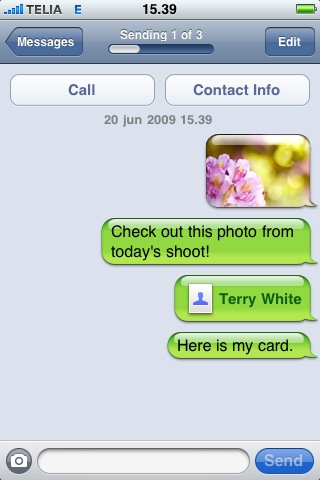 For the Northern Hemisphere, as in the United States, Canada and most of Europe, Fall begins on September 22, 2009 at 5:18 pm EDT.

AT&T promised us that we would have MMS messaging for the iPhone this "Summer".  Although AT&T did recently announce that MMS is coming on September 25th (3 days after summer officially ends), there is still no word on Tethering support (which was given no timeline at all except for "in the Future").

I’m not a fan of AT&T nor do I hate them. I’ve had AT&T service for years before the iPhone. However, I’m starting to see WHY so many people complain about their service. The mere mention of AT&T in a public setting will usually get you a few glares and eye rolls.

We can speculate and take AT&T at their word that in order to allow for iPhones to do MMS, they had to do some network upgrades. However, the odd thing is that MMS is hardly new technology. All other AT&T phones can do this and have been doing this for years. Tethering is also not a new thing. Again, other AT&T smart phones can do this. What this really says is that although AT&T allows both MMS and Tethering on other phones, these features must either be rarely used by non-iPhone users or that they are so hard to do on other phones that most people don’t ever use these features. So it was OK to offer these features with the existing network to non-iPhone users because they couldn’t handle the traffic. Studies have shown that because the iPhone is so easy to use that 80% or more iPhone users do web browsing and email REGULARLY on their iPhones. So it’s a sure bet that iPhone users will also be using MMS too!

Note to AT&T: Advertising that you have the biggest, fastest 3G network doesn’t really mean much if you can’t actually do anything on it!

We all know that the minute Apple announces iPhone availability on another US carrier such as Verizon, that they will see an immediate increase in market share especially from those hold outs that have refused to go on AT&T’s service. Now what will really be interesting is how many people will LEAVE AT&T to go to Verizon for their iPhone service?

Will you leave AT&T once the iPhone is on Verizon? » create online polls
Tags : iphone at&t verizon

7 Replies to “Hey AT&T! Summer is almost over! Where is my MMS?”