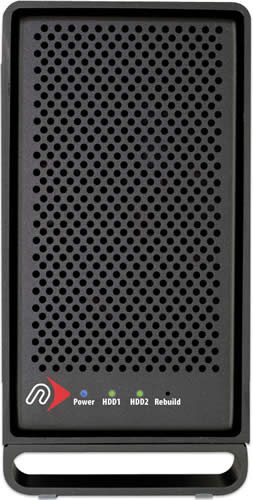 OK, you've heard me harp on the need to have backups. However, in some cases having an up to date backup could still mean losing hours of work. That's where a RAID-1 [MIRROR] comes in. OWC carries the NewerTechnology Guardian Maximus line of RAIDs. With a RAID-1 you have TWO identical hard drives in a case that are writing the data simultaneously to each drive. The idea is that if one drive fails, you would still have everything up to that second on the other drive. Â

I tested the 1TB Guardian Maximus

This drive has USB2, Firewire 800 and Firewire 400 connections on the back and comes with all 3 cables. I connected the drive up via Firewire 800 out of the box and it mounted on the desktop. It was already formatted for Mac OS. I copied a couple of gig to it from my server and speed was acceptable. When it comes to speed you have to remember that the data is being written to both 1TB drives at once. The drive (enclosure) is relatively quiet. There are LED indicators for the drive activity of both drives. If one of the drives fails the indicator for that drive will go red. Once you replace the failed drive, the Guardian Maximus will automatically "rebuild" which means that it will mirror the data onto the replacement drive. The only downside to this that I can see is that there is no other indicator that the drive has failed that I'm aware of. In other words if you didn't notice the red light on the front of the enclosure you could be at risk. It would be nice to have software (like the Drobo) that monitors the status of the drives and automatically alerts you if one of the drives goes bad. Â

This is not a substitute for backing up

OWC includes award winning backup utilities like Prosoft's Data Backup 3 for the Mac and NovaBACKUP for the PC. They also include Intech Hard Disk SpeedTools for the Mac. The reason that a RAID doesn't substitute for a backup is that it's writing and erasing data on both drives as you use your computer. Therefore if you accidentally delete a file the file will be deleted on both drives immediately. Also if you got some corruption or a virus, then your files will be corrupted or infected on both drives in the RAID. Instead use a RAID as your main drive or as a backup drive or both. This way you'll still have your backups if you need to recover a file or two AND if one of your drives crashed you could theoretically keep right on going. Â  OWC sells these starting at $259.99 for a 250GB solution (2 250GB drives). They also sell the enclosure so you could build your own using your own drives. The enclosure goes for $149.99.

12 Replies to “Guardian Maximus for up to the minute protection”