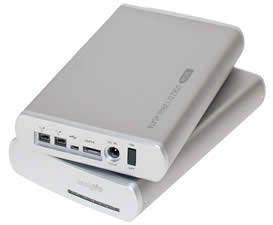 I recently had to move some computers around and transfer some data from one drive to another. The easiest way was going to be to put the New 750GB SATA drive in an external case. Since I didn’t own any SATA to Fir wire cases, I went looking for one. My search lead me to CoolDrives.com. They had this SATA to Firewire/USB2/eSATA enclosure on sale for $99. Although that still seems like a lot for just an enclosure, it was one of the lowest prices I found. I bought two of them (I will need them in the future) and temporarily installed my new drive to do the transfer. The transfer of 365GB’s went without a hitch (7.5 hours later at Firewire 400 speeds). I was floored to see that they included not only the power cable, but a Firewire 800 to 800 cable, USB 2 cable, and Firewire 800 to 400 cable. Although most users will only need one of these, it was a nice touch to not have to go out and buy them separately. Installation of the drive in the case was a piece of cake. Remove 3 small screws and you’re inside. Plug in two cables and secure the drive  to the bracket. This case is whisper quiet and works as advertised.