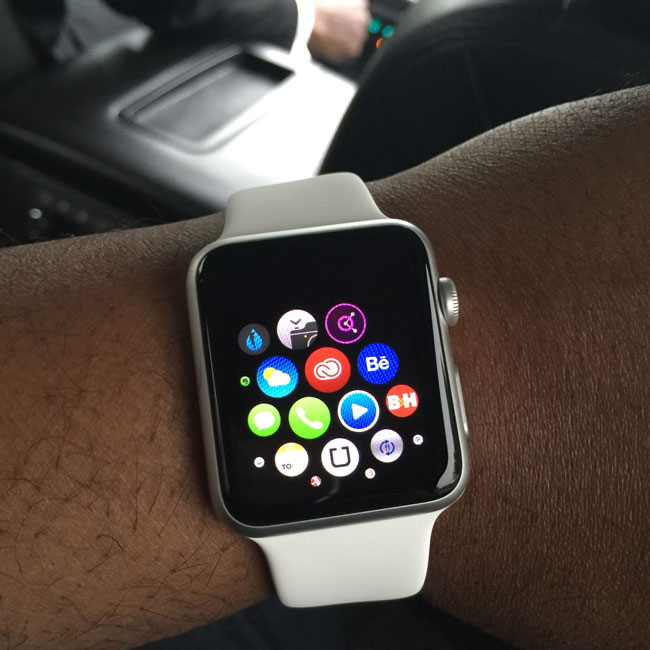 Many of my followers told me that when they saw that I was getting an Apple Watch that they “can’t wait to read your review.” Well here it is… At 3:00 AM ET on April 10th my alarm went off so that I could roll over and place my order for my Apple Watch. I was able to get into the site by 3:05 AM and I placed my order for a 42mm Silver Sport Watch. The Silver Sport only comes bundled with a White Band, Blue Band, Pink Band or Green Band. I’m really not fond of any of those colors, but wanted the Silver watch. Therefore I ordered an extra Black sport band (it’s still on backorder). By 3:10 AM I had rolled over and went back to sleep. Because I got my order in fast enough I was lucky to be in one the first shipments. I got my Apple Watch via UPS at about 2:45pm on April 24th. I had already done some research, read other reviews and watched the videos on Apple’s site. Therefore I knew a lot about the Apple Watch before I broke the seal on the box. I knew that the setup process included a fairly long sync process to sync the Apple Watch Apps from my iPhone. The process took about 10 minutes from start to finish. Of course your mileage will vary based on the number of Apple Watch compatible Apps that you have on your iPhone. Right after I got it setup I recorded this video to give a quick video overview of some of the features:

After A Full Day Of Use…

The video above was only after having just setup the Apple Watch. It just so happened that I was traveling on a business trip Friday evening. I got the watch setup in time to head out to the airport and make my flight. The first real world use I got (besides simply seeing the time at a glance – yes it is a watch) was to use the Uber App to summon a car to pick me up and take me to the airport. The next real world use was using the Delta boarding pass that I had received the day before on my iPhone in Passbook. Any of your Passbook passes automatically appear on your Apple Watch. I used it both at the TSA checkpoint and to board the plane at the gate. No problems. I landed and got a notification from the Hertz iPhone app to let me know what stall my rental car was in. I drove to my hotel, checked in and crashed for the night.

Battery Life… The next day (Saturday) I woke up and after showering I put my Apple Watch on. While you’re supposed to be able to shower in the Apple Watch I’m just not ready to take any chances at this point. I’ve seen the video where someone submerged an Apple Watch under water for 15 minutes and it still worked. Apple says it’s not water proof and I’m not ready to push it. I put the watch on at about 9:45am and went on about my day. When I got to my seminar I used the timer app on the Apple Watch to remind me 10 minutes before my end time. The great thing about the Apple Watch timer is that it will give you a taptic response when it goes off. This way I can feel it even if I don’t hear it. I used the Apple Watch as much as I wanted throughout the day and at 9:42pm (about 12 hours later) my battery indicator showed that I had 47% battery left. This was good. I would only be up for a few more hours at the most and this meant that I can easily use the Apple Watch with a single charge each day. As a matter of fact as I write this post on Sunday night and having started earlier today at around 8:30 AM I still have 36% battery life at 12:22AM (Monday morning). 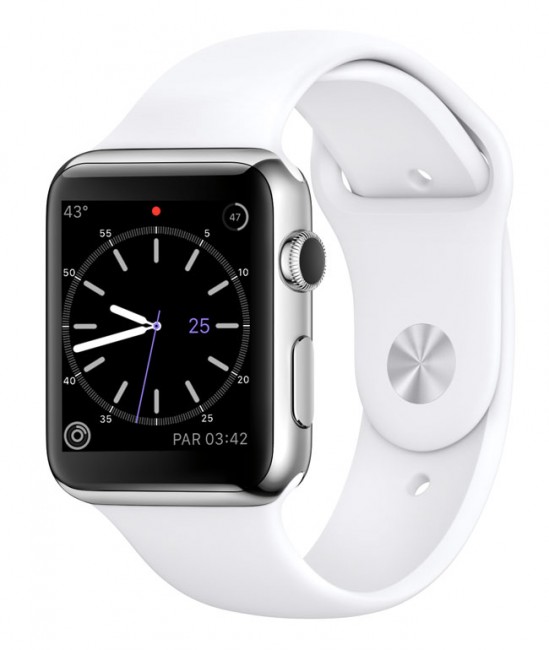 On Sunday I got up a bit earlier and went on a morning walk along the river. I like the Activity monitor and I was looking forward to the Apple Watch replacing my Nike+ Fuelband and it does so nicely. The Apple Watch allows you to track your overall activity/calorie burn, standing for at least one minute every hour for 12 hours throughout the day and getting at least 30 minutes of exercise throughout the day. 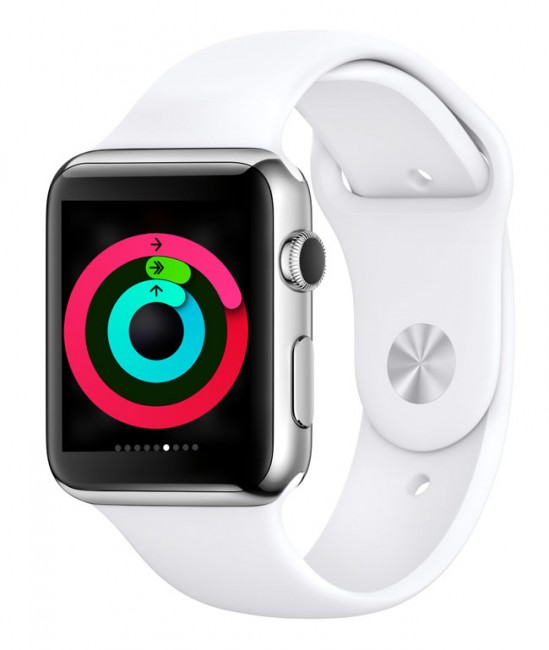 What about the Apps?

Reportedly there were at least 3,000 apps available on April 24th for Apple Watch. I know that I was seeing updates on a daily basis. I have 71 Apple Watch Apps myself.

After a couple of days of use I have found some apps to be more useful than others and of course some work better than others. Some are simply useless in their current form while others I couldn’t imagine not having. The best ones I’ve seen so far are: FlightTrack, Uber, Keynote (I remote controlled my slide presentation on Sunday via my Apple Watch), Calcbot, Deliveries, Shazam and Weather Live. These Apps are Apps on my iPhone, but work well enough on Apple Watch that I don’t have to pull out my iPhone to use them or see the data that they present. On the other hand there are some embarrassing ones too. The two Apps that have given me the worst experiences so far are the Delta Airlines App and the Marriott App. With the Fly Delta App you’re supposed to be able to see information about your flight before you take off and during the flight the status and count down til you land. The problem is that the app takes forever to load. I mean like minutes! My flight attendant noticed that I had an Apple Watch and asked how I liked it? She seemed really interested in it. I decided to start with the Delta App since we were on a Delta plane. We waited, waited and waited and finally she had to go and work the flight. It did eventually launch and displayed the remain flight time. However, the remaining flight time never updated throughout the flight. This App is seriously broken. The problem with the Marriott App is Marriott’s obsession with making you sign-in with your password every time you want to use the App. This was an annoyance on the iPhone (not having a “keep me signed in option”), it’s a deal breaker on the Apple Watch. If I have to pull out my iPhone to sign in, then I might as well continue to use the App on my iPhone.

NOTE: I noticed today that once I opened the Delta app on my iPhone the Apple Watch app opened right away. Like the Marriott app, that defeats the purpose of the Watch app. This needs to be fixed.

I imagine that the apps will get better now that developers actually can get Apple Watches to test with. I expect this market to continue to grow.

The Built-in Apps are Good

As you might expect the built-in apps are generally better, more stable than the 3rd party Apps. I’m sure Apple’s engineers had complete access to the hardware to play. I really like the Messages App, Passbook, Weather,  the Phone app, and the Timer (I used the timer as a presentation timer on Saturday and really appreciated the tap on my wrist letting me know I only had 10 more minutes left).

It’s all about “Glances”

I’m finding that while you can have up to 20 Apps with “Glances” that fewer “Glances” are better. By the time you have to swipe left or right 10 times to find the Glance you want you could have just as easily found and opened the App itself. Today I removed all but the few glances that I will use the most. By the way a “glance” is when you swipe up from the bottom to get to things like battery life, current stock price of your favorite stock, current weather etc. When you swipe up you see the last glance you used. To switch to a different glance you either swipe left or right to navigate them. Having too many will defeat the convenience of glances.

Apple Pay is the Killer App

One of the things I was looking forward to with Apple Watch is actually Apple Pay. The idea of not only not having to take out my wallet at the register, but not having to take out my iPhone 6 Plus is very appealing. I’m happy to report that Apple Pay rocks on Apple Watch and is definitely the fastest way to pay for things. See it in action in this short video I made:

Every time I mention Apple Watch I always have at least one person questioning why anyone would need it? Apple Watch is an extension of your iPhone on your wrist. There isn’t anything that you can do on Apple Watch that you couldn’t do on your iPhone. I remember the same arguments that surfaced when the iPad was released. There was nothing that you could do on iPad that you couldn’t do on your laptop. If you’re in that mindset then you’re right Apple Watch is probably not for you. For me it’s about seeing information at a “glance” and not having to always pull out my iPhone 6 Plus. The same way the iPhone allowed me to do things without always having to pull out my MacBook Pro. If the Apple Watch did nothing but displayed the time, weather, date, another time zone of my choosing, gave me my Passbook passes and Apple Pay it would have already been all that I wanted. However, the Apple Watch offers so much more. For a 1.0 product the hardware seems solid. I would like to see more watch faces as it seems like the iPod nano had more watch faces than the Apple Watch, but I’m sure that will happen in time with software updates. Once the 3rd party apps are refined a bit, Apple will have another healthy new product line on their hands. I’m happy with my purchase and look forward to continued updates, apps and other 3rd party accessories.

One Reply to “Apple Watch Review”