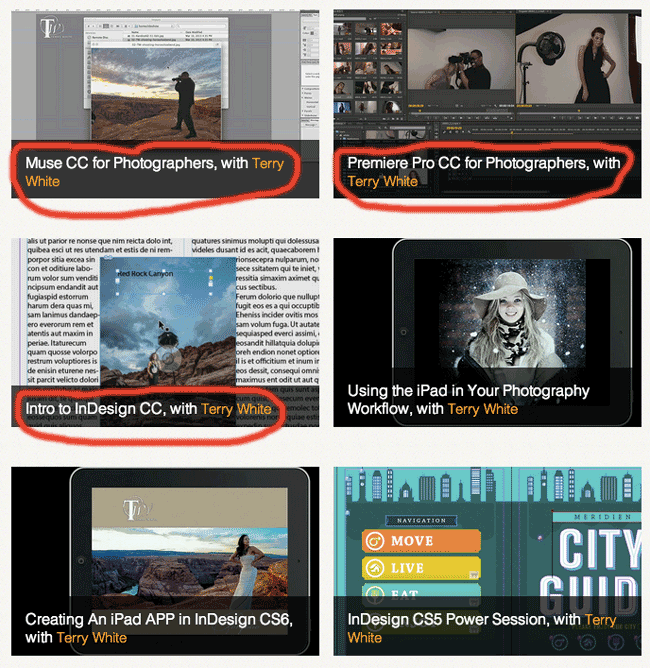 Hey everyone, I just wanted to give you a heads up about my three NEW Online Classes on KelbyOne. I visited KelbyOne studios a couple months back and recorded three in-depth online classes and now all three have been released.

You probably know that you need a website, but you’re not really into writing code. That’s why Adobe Muse CC was created. In this class Terry White shows you how to get started and create a complete website from scratch without having to write a single line of code. You can have your own website and more importantly update it as often as you need.

You would be hard-pressed to buy a camera that doesn’t shoot video today! However, as a photographer you probably never got into video editing. Now with Adobe Premiere Pro CC it couldn’t be easier to tell your story with photos and videos. The problem has been that all the other Premiere Pro classes out there are geared towards video people. In this class Terry White shows you how to go from start to finish with your videos, photos, and music without all the video jargon. Let a photographer show you how to use Premiere Pro CC.

InDesign CC lets you bring your photos, text, and graphics together in a seamless integrated workflow. In this class Terry White shows you how to get started from scratch even if you’ve never launched InDesign before. After this class you’ll be able to lay out just about any document that you want to create. Brochures, newsletters, magazines, business cards, flyers, and books are just a click away.

I’m really happy with the way these classes turned out and I hope you like them too!