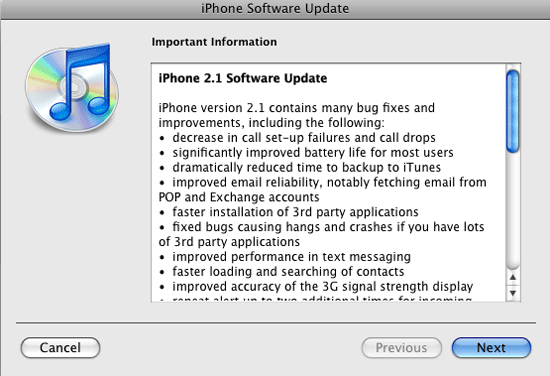 On Friday Apple released the highly anticipated iPhone 2.1 update! I wanted to use it for a few days before passing judgment on what it fixed vs. what it didn’t fix. This was not a feature update. In other words it didn’t include Cut, Copy & Paste as some had rumored, it was mainly geared at fixes a boat load of small issues that were frustrating some users. One of the main things it was to fix was the high rate of dropped calls that some users were experiencing. Since I wasn’t experiencing a lot of dropped calls, I can’t speak to if this is better or worse now. My call quality has been good since day one and seems to be the same with 2.1. The other 2 important areas were App Crashes and Performance. Now those two areas I can speak to. As I’ve said in the past, I’ve got over 1,000 contacts on my iPhone. So when 2.0 came out the first thing I noticed was that the contact list was so slow that it was almost unusable. Each update made it faster, but 2.1 actually gives me about 98% of the performance I was seeing with 1.1.4. I don’t want to say 100% because it does still lag for about a second or two sometimes.

As far as App Crashes go, this is a mixed bag. The problem is that if an app crashes now, well it’s hard to say if it’s Apple’s fault or the fault of the app not being updated for 2.1 yet. I was still getting a few crashes in Safari on certain sites, but I haven’t had a Safari crash since 2.1 has been installed. However, my Facebook app (which has not been updated) locked up the whole iPhone (needed to reboot it) when I tried to use the camera function with it. So again is that the fault of the app or 2.1? Hard to say.

If I had to say, I would say that 2.1 is definitely a BIG IMPROVEMENT over all. The iPhone does seem more responsive and like I said, I haven’t seen any real crashes (except the one) all weekend.

If you have more than a few apps, you’ll love how much faster Backing up and syncing is. Also installing apps is way faster.

I also should mention that Apple plugged several security holes including the one that someone could gain access to your contacts using the emergency dial feature. So you should install 2.1 if for no other reason than to make your iPhone more secure.

Little things that have changed in the iPhone 2.1 update

Like I said, this is not supposed to be a new features release, but that never stops Apple from slipping in a small change here and there. One thing you’ll notice is that now when you receive an SMS text message, your iPhone will now sound the alert up to two more times after the first time in about 3 minute intervals. This is for those folks that complained that if they missed it the first time, they wouldn’t know they had a message waiting without looking at the screen. Unfortunately there is no preference for this. So everyone gets this feature whether you wanted it or not.

You can also create Genius Playlists now (a feature in iTunes 8) right in the iPod app on the phone. I didn’t see it at first and I knew it was supposed to be there. The reason I didn’t see it was because I sync my iPhone to two different computers. One for data and one for media (music, movies, etc.). It wasn’t until I sync’d it with the computer that holds my music, that that feature became active.

No more app updates screwing up your custom home screen configurations! This is a biggie! One of the things that frustrated me and several of my friends is that you spend time putting the apps in the order you wanted them in on your iPhone only to have that order screwed up when you did an update to one of your apps by sticking the update at the end on the last page. Now when you do an update, it does temporarily put it at the end until it’s done and then replaces the old app in the same spot! Yay! 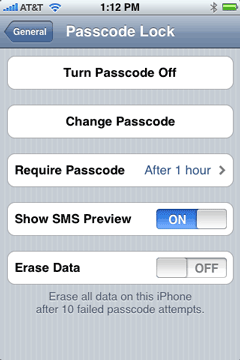 Wipe it automatically if someone tries to break in! Now there is an option that when you set a PIN on your iPhone you can optionally have it automatically wipe the iPhone if someone tries to enter the wrong PIN (guessing it) 10 times in a row. By the way I highly recommend setting a PIN on your iPhone. There some myths around this feature and let me clear them up now. The biggest thing people tell me is “hey I don’t want to have to enter a PIN to answer my phone!” OK good, because you don’t! Even if your iPhone is secured with a PIN you don’t have to enter it to answer a call. You only have to enter to make a call and only after the PIN has kicked in, which that interval is up to you. For example, on my iPhone I have it set to an hour. If I haven’t touched my iPhone in an hour, it automatically locks and requires a 4 digit PIN to use it again. You can go from immediately to 4 hours. When I’m on the road I change it to 15 minutes. This way if I lose my iPhone or if it’s stolen, I don’t have to worry about someone picking it up and just start using it and worse getting access to all my info on it. Because my iPhone is now setup to use Exchange, if it ever does come up missing, I can have my IT folks at work wipe it clean remotely. Once the wipe starts, there is nothing that can stop it. Not even turning it off or removing the SIM card. Once you turn it back on the wipe continues. Pretty James Bond’sy. The last myth is: “What if it’s an emergency and I need to make a call?” If you’re in an accident and someone needs to dial 911 on your iPhone but you’re unconcious and they can’t get the PIN out of you, there is an “Emergency Call” button that is accessible even when the iPhone is locked with a PIN. So there is no excuse, go Turn your Passcode on right now!

Cosmetic changes too. The 3G and EDGE display is different. Apple used to put a box around the “3G” and reverse it out, now the box is gone and it just says “3G”. Also now when you watch a movie (video, video podcast, etc.) and you don’t finish it, there will be a circle in front of it that is half filled in. So the blue dot means you haven’t watched it yet, no dot means you have watched it completely and a half dot means you started it but didn’t finish it.

Mac OS X 10.5.5 came out yesterday and fixed a slew of bugs. I read through the list saying, “oh that’s good, oh that’s a good one”, but in all honesty I haven’t really noticed a difference. Granted it hasn’t even been 24 hours yet, but I wasn’t really having any major problems with 10.5.4.

The one thing I would like to see addressed and I thought it was in 10.5.5, but I read it wrong, was the ability to sync subscribed iCals up to Mobile Me. It’s just lame that I can’t wireless sync my family and organization calendars to my iPhone because I use Mobile Me. If I sync them over USB I can! Apple also treats the Birthdays calendar as a subscribed calendar too. So no birthdays on the iPhone – LAME!

I do have a work around though. Since Birthday calendars, user group meeting schedules and Holiday calendars don’t change often, I exported those “subscribed” iCals out and then imported them back in as NEW iCals. That way the new ones are not subscribed to and therefore sync up to Mobile Me and my iPhone. This is a temporary work around as I’m hoping this issue will be fixed in the not too distant future.