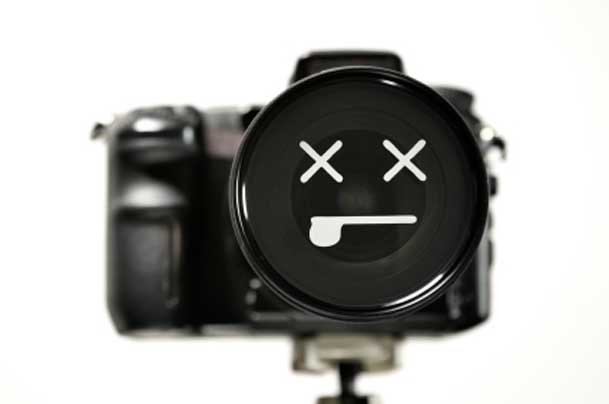 It feels like déjà vu! It was a few days before Photoshop World Vegas and I was in the middle of shoot and all of a sudden I noticed the last couple of images didn't come up on the screen in Lightroom. I looked down at the camera and to my dismay I saw my USB tethering cable was at a 45° angle on the side of the camera. I thought, "that can't be good!" At some point my hand must have applied a bit of pressure to the end of the cable going into my D700 and as I suspected I damaged the port once again. Last time this happened was the week before Photoshop World Orlando. The only difference was in the previous incident I must have tugged on the cable too much. See that blog post here. I solved that problem with a TetherLock: 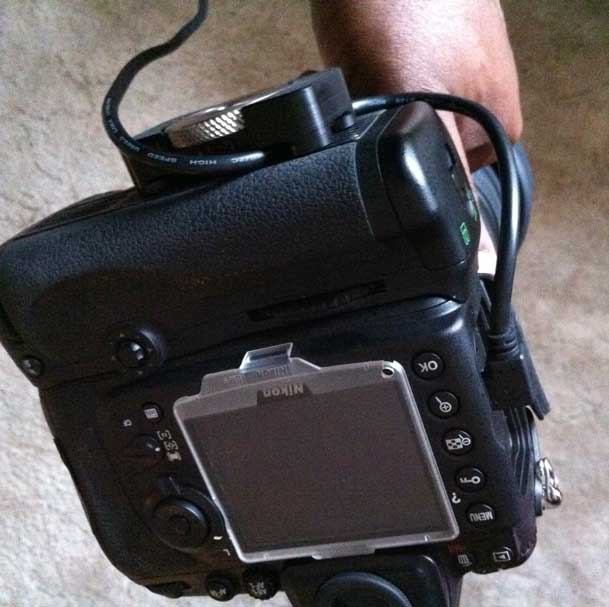 However, as I painfully found out solutions like TetherLock and the ones from TetherTools only solve the cable "tug" problem. As you can see in the image above the cable plug is still exposed and therefore it has potential to be bumped, pushed, bent, etc.

I need a cage or bracket

I started thinking about ways to protect the actual port with some sort of cage or cover that surrounds the port/cable connection itself. Little did I know at the time that such solutions already exist. Blog reader and friend Ken Toney suggested this "Cable Relief Spacer" from Really Right Stuff. I thought "PERFECT!" 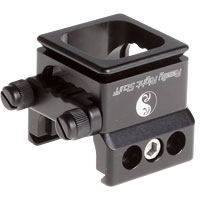 However, there was a small problem. All of my tripod heads and plates are by Kirk. I bought them long ago and while I do plan to switch to Really Right Stuff at some point (just for compatibility with all the people I shoot with), I hadn't planed on doing it right now. I wondered if Krik offered a similar solution for the L-Brackets I already own and fortunately they do! I ordered the Kirk LBA-1 USB Spacer Block immediately While these solutions basically offer the same solution, I would give the nod to the Really Right Stuff one because it appears to do both: Protect the port AND keep the cable from being tugged. Nevertheless, I'm now using the Kirk Spacer Block and my existing TetherLock for the ultimate "Terry proof" solution. 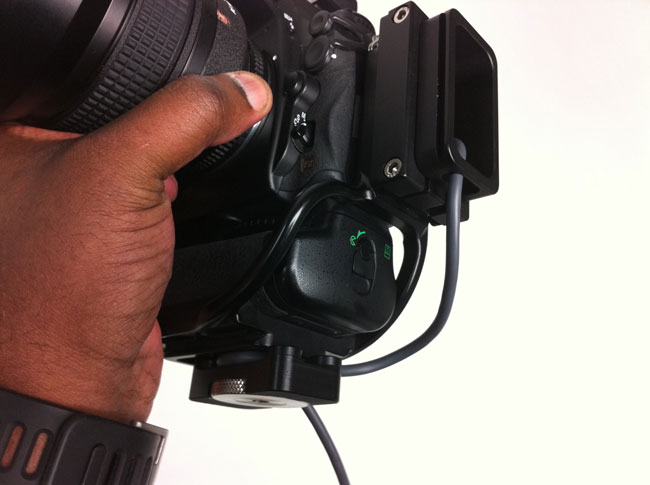 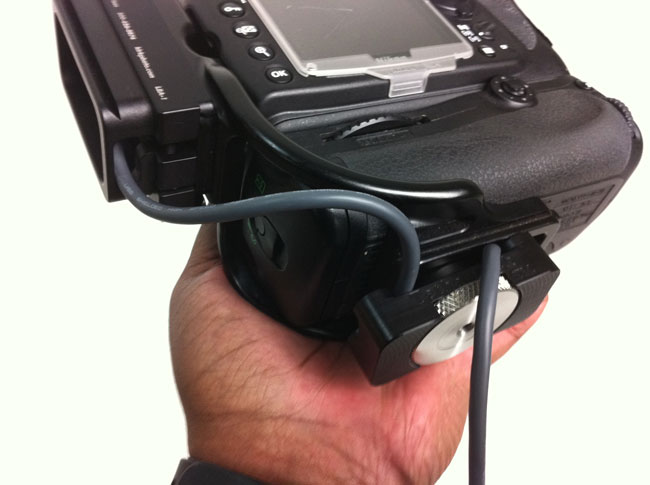 These extra pieces add cost to tethering. However, I couldn't imagine not tethering to Lightroom during my studio shoots. Now if only the camera manufacturers would wake up and build fast wireless tethering right into these expensive camera bodies (or at least the battery grips) this breaking the usb port, tripping over the cable, stuff would be a thing of the past. 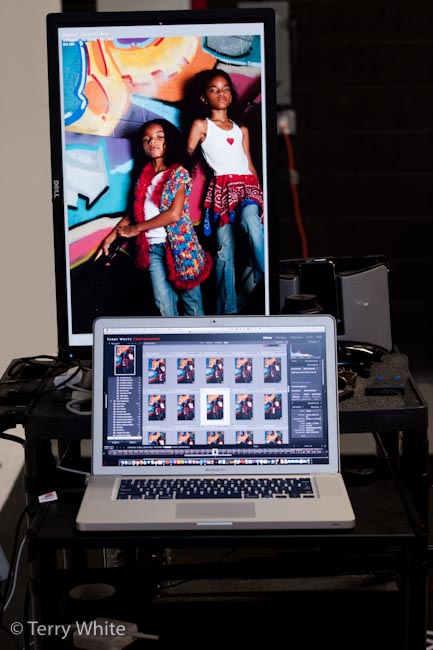 When I shoot in studio I'm usually shooting tethered to Lightroom 3 99% of the time. While my 15" MacBook Pro has been adequate all these years, I decided to go with an external display in my new studio. The question was, "which one do I get?" Right about the time I asked this question, I saw that Dell (yep, Dell) had just introduced a NEW 24" Display. You might be asking why would I get a Dell monitor for my Mac? Good question. The main attraction for me to this particular display is that it "rotates!" The display can be used in either portrait or landscape orientation.

It has all the latest bells and whistles including: LED, IPS (in-plane switching) for wider viewing angles, Display Port, USB Hub, DVI, Adjustable Height and a 3 Year Warranty.

For those of you old enough to remember the Radius Pivot Displays, you'll probably remember that back then the display would auto adjust based on the rotation and the driver on your computer. In the case of this new Dell there is no such magic for the Mac. However, manual display rotation is built-in to Mac OS X's Display Preferences. While it would be a slight pain to have to manually switch this setting every few seconds I find that I leave it in Portrait "most" of the time. If I shoot a wide shot, it displays it, but it just doesn't fill the screen. If i'm going to be shooting a long series of landscape oriented images then I'd make the System Pref adjustment.

Why not just shoot to an HDTV?

That question comes up a lot and I've tried it. My Nikon DSLRs have HDMI out and I could plug right into a nice big HDTV. The problem I find with this mostly is that the colors, brightness, contrast, etc. don't look the same. This means that after doing a shoot and importing the images into your computer they could look really different than what you adjusted for during the shoot. Since my shots are going to end up on a computer more often than a TV, I'd rather tether into my computer to begin with.

If you know me, you know that I've rarely if ever mentioned Dell on my blog (or anywhere else), but this time I gotta say that I'm currently a happy Dell customer. I'm actually surprised with all the accelerometer tech that Apple uses in iDevices that they haven't done this with their computer displays. Oh well, for now "it's a Dell."

You can check out the Dell UltraSharp U2412M "W Display here.

I also bought this Display Port to Mini Display Port cable. Of course after I ordered it I remembered that monoprice.com probably has it cheaper and they do. 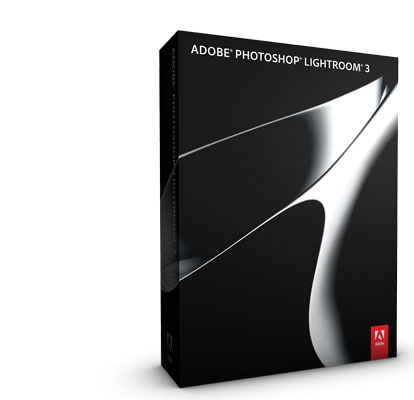 If you have a Nikon D7000 (Yippie!), Canon EOS 60D or 550D and you're a Lightroom user you'll be happy to know that the 3.4 update is here and provides built-in Tethering support for your camera.

END_OF_DOCUMENT_TOKEN_TO_BE_REPLACED

If you've been reading my posts for the past few days you've probably noticed a theme: Wireless Tethering/Shooting. Now I'll disclose the reason that increased my interest in wireless solutions for shooting to my iPad or laptop. A couple of weeks ago I taught a workflow workshop in Texas for Precision Camera and Westcott. An important part of my workflow is shooting tethered into Adobe Photoshop Lightroom 3. On the 3rd day of this 3 day workshop I just couldn't get the tethering to work. Nothing really changed on my end that I could see and it had worked flawlessly for two straight days, but for some reason I couldn't get past the 1st shot. I tried the usual troubleshooting things, but nothing would get this working again so I moved on. I shot to the card and just took breaks to import the shots via my Firewire 800 CF card reader and showed the class. I got home and didn't think about it again until my next studio shoot. This is when I knew something was really wrong. I tried different cables and nothing would work. Again I had to move on and shoot to the card to get through the session. When I got home that evening I decided to do some additional testing. I tried different cables and again nothing would work until I realized that the cable attaching to the camera seemed slightly more loose than usual. Nothing crazy, but noticeable. I applied a little more finger pressure to the cable end pressing leaning it one way and Lightroom saw the camera. I tried holding it this way as best I could, but the slightest movement would cause a disconnect again.

It was time for a repair

On my way out the door to Photoshop World I stopped by my local authorized Nikon Repair Facility – Midwest Camera Repair (these guys are great) and dropped off the D700. They said that it was probably an issue with the port being broken off from the circuit board or the board itself had gone bad. If it was just the port then the repair would be around $125. If it was a bad board – oh oh – "we'll call you." Needless to say I was praying for a "disconnected port." Luckily that's all it was and I was happy to pay for this versus a whole new board.

I don't want this to happen again

I shoot tethered 99.9% of the time in studio. I can't imagine going back to just looking at a 3 inch LCD. My colleague Tom Hogarty (Lightroom Product Manager) pointed me a device called TetherLock. 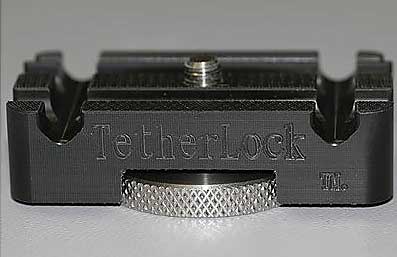 The concept is simple. You attach this device to your tripod hole/port (there is a pass-through so that you can still use a tripod) and run your cable through it. When you tighten it it not only keeps the cable in place, but if you accidentally step on or otherwise tug the cable while shooting there will be zero pressure/tension applied to the USB port on the camera. Like I said, the concept is simple. I ordered one here and it works fine. It's crazy expensive for what it is and YES there are several do-it-yourself options (I don't need you to list them for me, I get it 🙂 ), but as I've said before I'm not a D.I.Y. kinda guy. Clearly I'm not the only one with big feet tripping over tethering cables while shooting or this product wouldn't exist.

The other thing I would recommend whether you go with TetherLock or your own solution, is a USB cable that has a L-Left head on it. This allows the cable to run down flush along the body as opposed to sticking straight out. Here's the one I use. 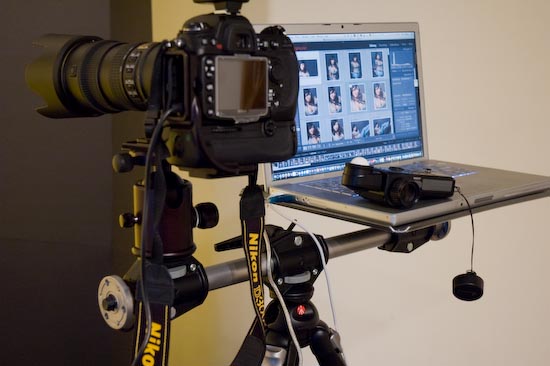 Built-in WiFi on all cameras can't get here fast enough for me. Until that day happens I'll continue to shoot tethered via a USB cable for my studio shoots. Not ripping the cable out during future shoots is going to be nice and better yet not damaging the camera/USB port is even going to be better. 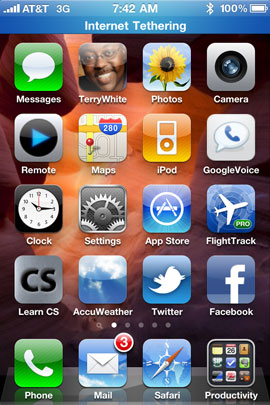 One of my main AT&T/iPhone complaints has finally been addressed. Ever since the iPhone 3G (and for some, the original iPhone) came out two years ago, I wondered why AT&T was so adamant about NOT allowing you to tether (use your iPhone as a modem/WiFi hotspot) your iPhone to your laptop and share its 3G data connection. After all they allow this with every other smart phone they sell and they even sell 3G data cards. Also no one ever expected this to be FREE. So I never really got why this was such a big deal? Granted AT&T couldn't do it alone and it would require built-in support by Apple in the iPhone OS (iOS). However, that support came in iPhone OS 3 LAST YEAR. So what took AT&T a YEAR to allow it on the iPhone for us in the US? They claim that they still needed to tweak their network to allow the influx of additional data traffic. While this may be true, the thing is since it's not FREE, not everyone is going to do it. Also it's not something you're going to be using all the time or would you?

Data Plan caps may have been the real issue

I don't doubt that AT&T needed to (and still needs to) work on "the world's fastest 3G network" to get it ready for even the slightest increase in traffic, but I suspect that an even larger issue was not wanting you to be able to pay a flat fee and have unlimited use. Even when you go with a $60/month 3G data card from AT&T there is a 5GB/month cap on it. Up until now all iPhone plans have been "UNLIMITED" data. So while the amount of 3G data that iPhone users currently consume must be HUGE, I'm sure giving users unlimited tethering would have brought this fragile network to its knees.

Do you want unlimited iPhone 3G data or do you want tethering?