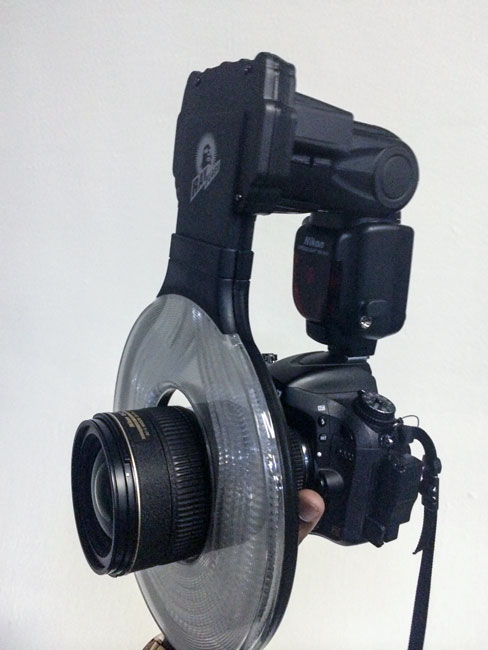 Ring lights are often used in fashion photography. However, unless you plan to use one on a regular basis they can be expensive and cumbersome. The RayFlash 2 is designed to work with your speedlight to provide a more attractive, flatter, shadowless feel to your images as opposed to just the pop-up flash or direct speedlight alone. Traditional ring light configurations come in all sizes and different specifications. Some of the newer LED based ones are lower cost. However, the professional ones tend to cost a few hundred to several hundred dollars. I like the looks of ring light photography, however not enough to invest hundreds of dollars in one. That’s why the RayFlash 2 is very attractive to me. It’s small enough for travel and low cost enough not to break the bank. You can see my original RayFlash review here that I did 5 years ago. Time flies. Since that time ExpoImaging has made some nice improvements on the RayFlash and introduced it as the RayFlash 2. The first enhancement is that it’s now much easier to attach and adjust. The head expands to fit around your speedlight easily. Also the channel slides up and down to accommodate the height of your DSLR and speedlight. Although it’s very adjustable it does come in two sizes. One for larger DSLR bodies like my Nikon D4 and D600 and a smaller model for smaller DSLRs. I wanted to try out the RayFlash 2 and here are my results:

The image above was taken without the RayFlash 2 and just using on camera flash. As you can see there are definitely some distinct hard shadows under the chin. There’s a reason why so many photographers shy away from on camera flash. The results are usually less than desirable.

The image above was captured using my Nikon D600, SB 910 and the RayFlash 2. If you compare the shadows you can see that the RayFlash 2 produces a flatter more flattering result with softer shadows.

If you’re looking for the “ring flash look” and you have a speedlight then the RayFlash 2 is definitely worth considering. This is especially true if you don’t need to use a ring flash for every shoot. I also really like how portable the RayFlash 2 is and that it easily fits in either my backpack or regular luggage for travel. I would say the only downside is that it’s not as big as some of the more expensive units out there. It would be nice to have a bigger one that produces an even softer light and bigger catch light. Otherwise, I really really like it.

You can get the large RayFlash 2 here.

You can get the small RayFlash 2 here.

As a photographer there’s nothing more complimentary than a major publication or company wanting to use your work to represent their brand or products. As “hobby” photographer that compliment goes up 1,000%. Photography has always been a passion of mine, but mostly a hobby.

One of the ways that hobby pays off is when I’m contacted by a publication that wants to use my work commercially or when someone wants to buy my prints or usage rights of my work.

Those are the times that make me feel like my work (which could always be better) is good enough to be considered “professional”.

END_OF_DOCUMENT_TOKEN_TO_BE_REPLACED 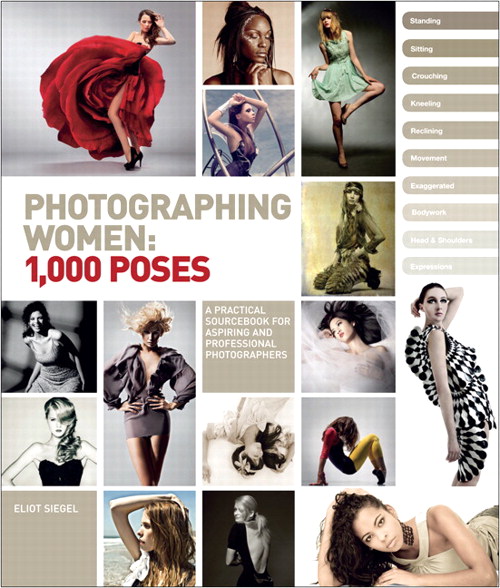 I do a lot of fashion and beauty photography and more often than not the subjects I photograph are women. I was intrigued by the title of this book: “Photographing Women: 1,000 Poses”. I figured it would be a good book to have around to get inspiration and to show a model various poses that I would like them to do. However, the book turned out to be much more than that. What I didn’t expect to find was a couple of very good chapters proceeding the poses that talked about shooting angles and lighting. I was immediately sucked in by not only the concepts but also the great job in providing the visuals. Eliot Siegel did a great job in not only talking about angles, but also showing an example of each one and how it impacts the way your subject looks. Once I got past the great info in the beginning of the book I was quite pleased with the 1,000 poses too. Great color photos showing and explaining the poses. 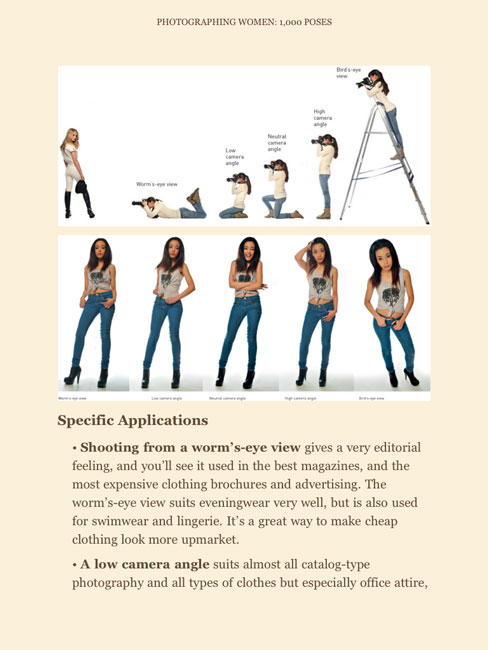 I initially bought this book as a Kindle book to read on my iPad, but I liked it so much that I bought a hard cover copy to have in green room of my studio. If you photograph women, you definitely want this book!

You can order your copy here. 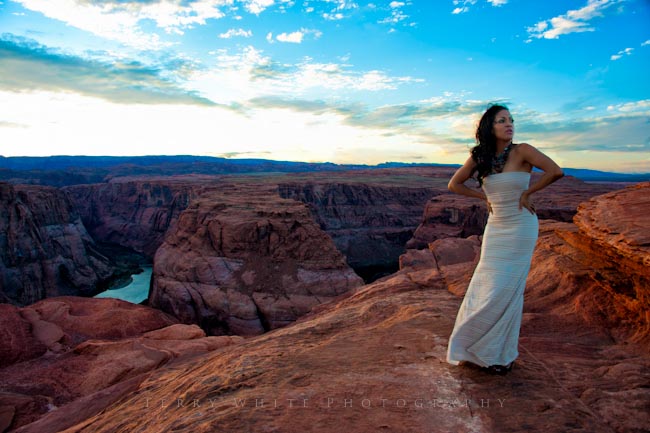 You might remember my photographic adventure from a couple of years ago where I visited Page AZ to shoot the slot canyons and Horseshoe Bend. During that trip I knew that I wanted to go back and some day do a fashion shoot there. 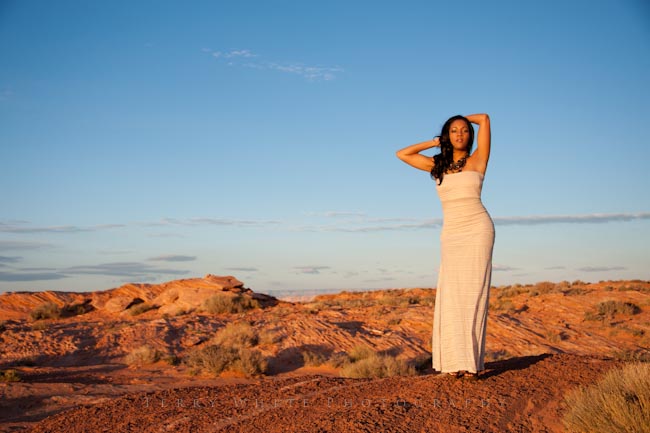 The funny thing about this is that you would think this would be an everyday event for photographers, but really it's not. You can find tons of images of Antelope Canyon and Horseshoe Bend, but very rarely do you ever see images with models in them (unless they've been composited in afterwards). 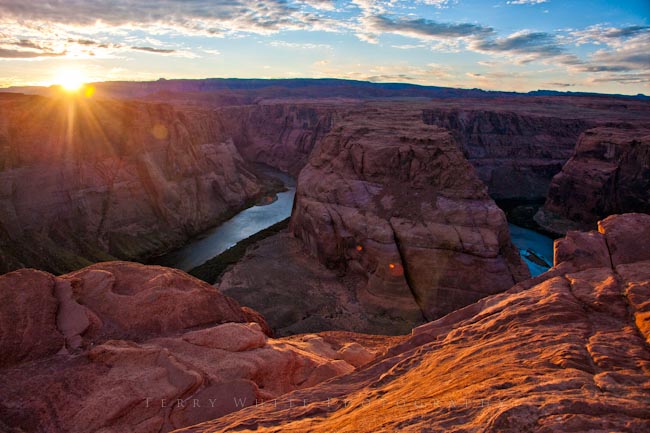 Having been there once before I kinda know why this is rare. First of all this area is kinda in the middle of no where! So if you're wanting to shoot a model in this location you're most likely going to have to bring one in. 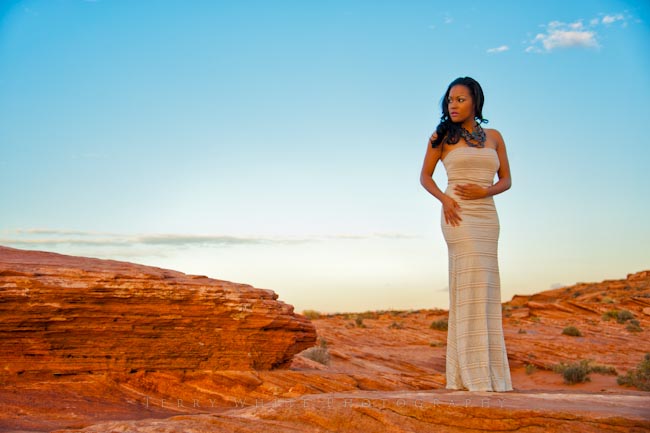 The second problem is that it's not that easy to get to. While there are small airports in the area, most of them don't have the major airlines. This means flying into Phoenix and driving for 4-5 hours to get there. (BTW: She's freezing her butt off, but she'd never let it show!) 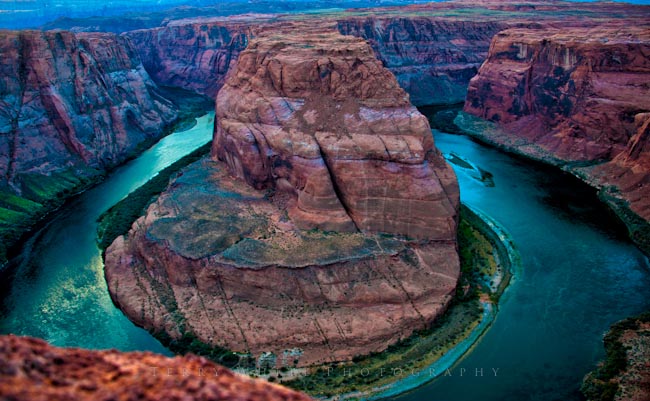 Luckily I was already on the west coast doing the HOW Interactive Design Conference in San Francisco, so all I had to do was fly from San Fran to Phoenix and meet the model there for the drive to Page on Saturday. I chose my favorite model, Kandice Lynn for this trip because there's one thing that I realized about Kandice. Not only do I get great shots when I work with her, she's also not a "diva". LOL 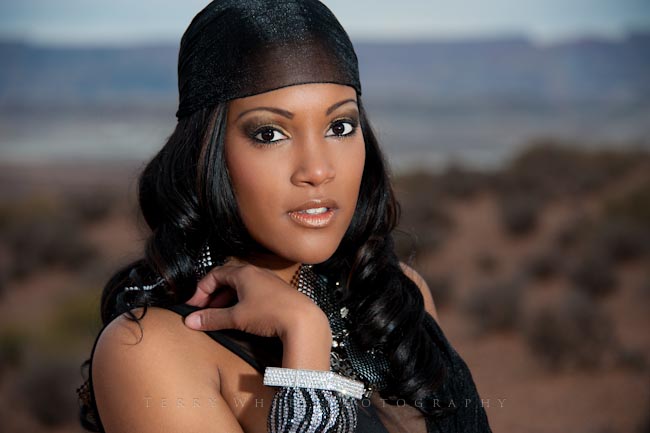 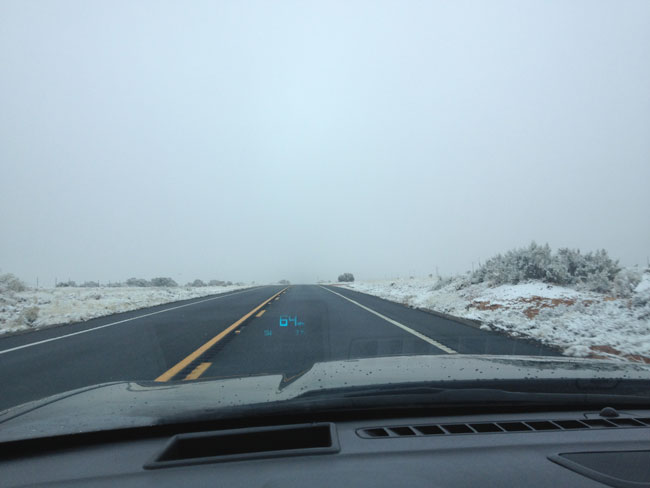 The best times to vist this area are April and October. Due to our schedules we couldn't go until November. You would think that a few weeks wouldn't make that big of a difference in climate and light, but it does! It was FREEZING! As soon as we got out of Phoenix and started heading north we were shocked to see snow on the ground!!! Pretty, yes, but it would kill the shoot. We called ahead to see if there was snow on the ground in Page and luckily there wasn't (YET). 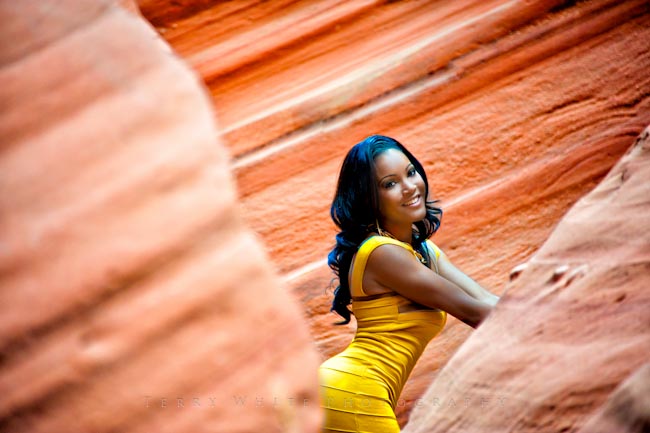 The next thing I learned was that while the slot canyons are BEAUTIFUL and you can have wonderful rays of light coming in. The time of year also affects this. I knew from doing a little reading that we would NOT have the rays of light due to the fact that the sun would be in a different postion. 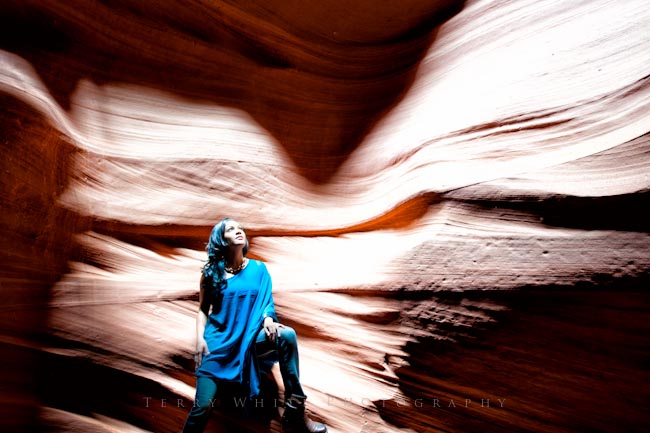 However, what I didn't think about was that on an overcast Fall day that the canyons would be just that much darker. While this isn't a problem shooting long exposures on a tripod, it becomes a challenge shooting a live subject due to the fact that no human being can stand perfectly still that long. This means either shooting at a higher ISO or introducing lights. They kinda frown upon flash photography in the canyons. Therefore I had to make the best of the combination of finding the right spots and working at higher ISOs. Lastly the light isn't as warm on the walls as it is in April and October, so you have to really look for the bright vibrant colors that would normally be everywhere! 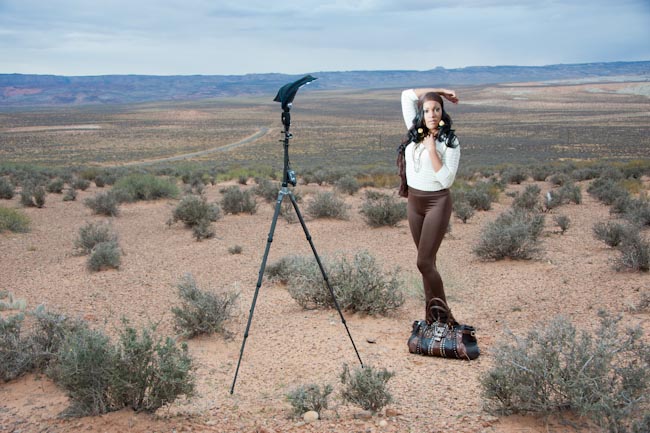 Of course shooting in the desert there are no restrictions on bringing speed lights. I used my Gitzo tripod as a light stand to hold my SB800 and FlashBender. 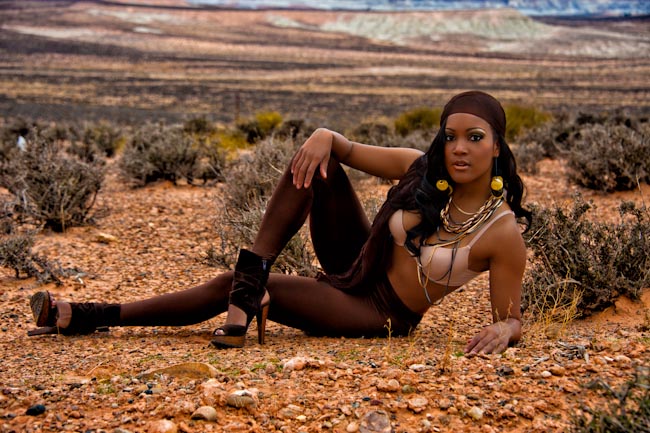 Once again there's Kandice being a trooper laying on the cold hard desert terrain to get the shot! 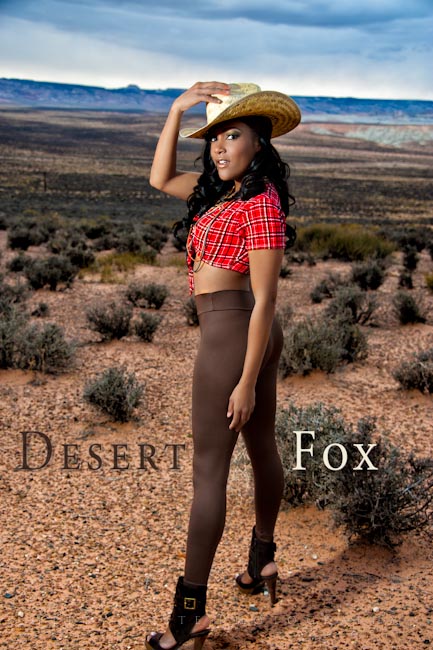 Yeah I know the cropping is a bit tight at the bottom of this shot, but it's the one she really liked best. 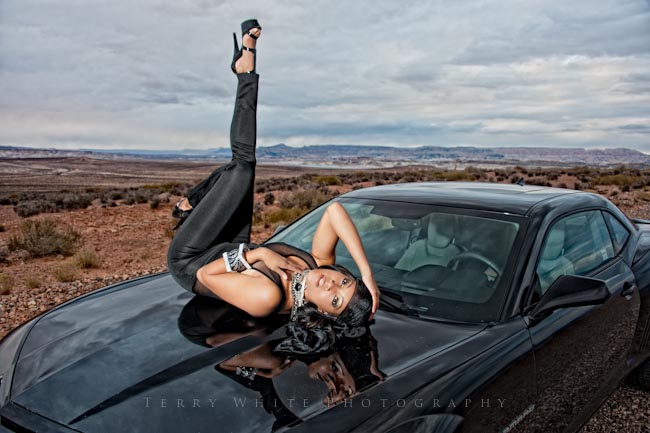 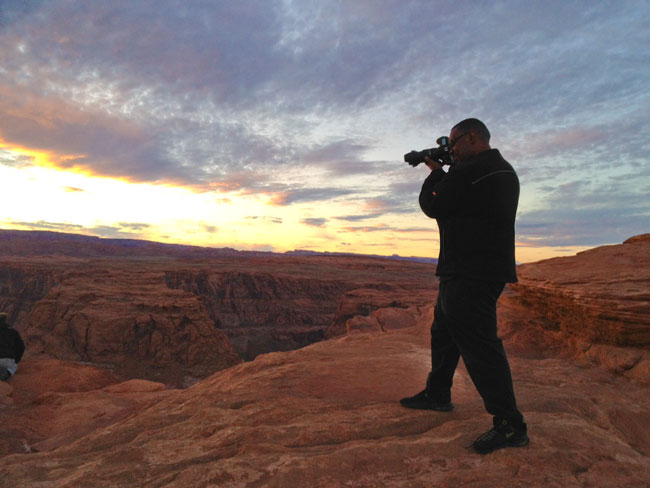 All in all it was a fun trip and as always I'm learning more and more about this whole photography thing. 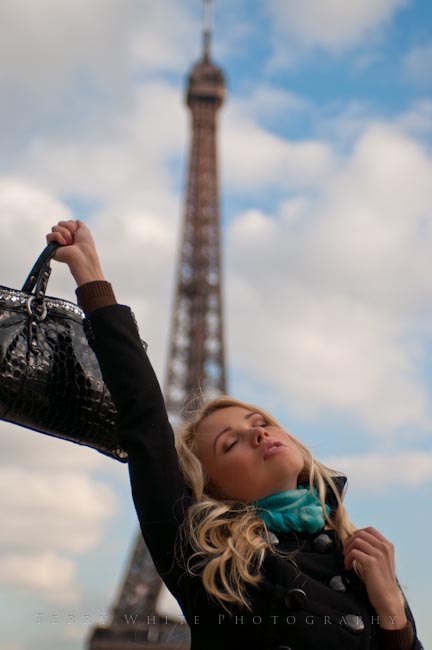 As I mentioned in my post last week, I certainly enjoy having the opportunity to attend seminars and workshops. However, this usually comes at a price. I'm not talking about the price of attending. I'm talking about the fact that I almost always see a piece of gear that I want. Attending Scott's seminar last week was no different. It was actually a piece of gear that he didn't even mention one time during his talk. Although he did talk about shooting at lower angles for fashion, but what I realized was that my current background support system just wasn't tall enough. When the background isn't tall enough and you're down low shooting up you'll more than likely see the top of the background and worse, whatever's above it or behind it. 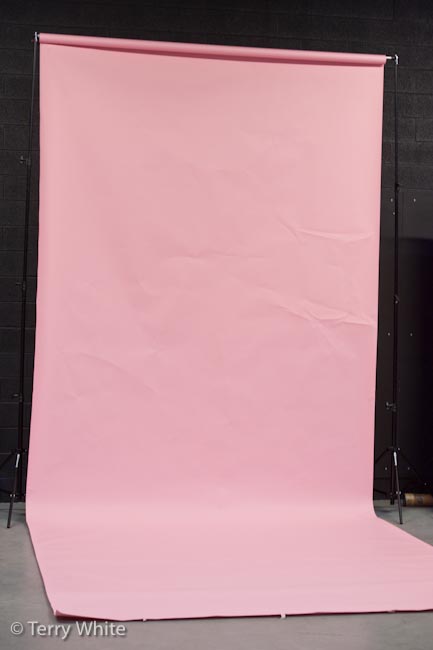 During one of the breaks and while I was helping swap out rolls of seamless paper I asked Brad (Scott's photo assistant) which stands he was using and he told me. I ordered them and set them up side-by-side with my existing stands, both at their maximum height just to compare. 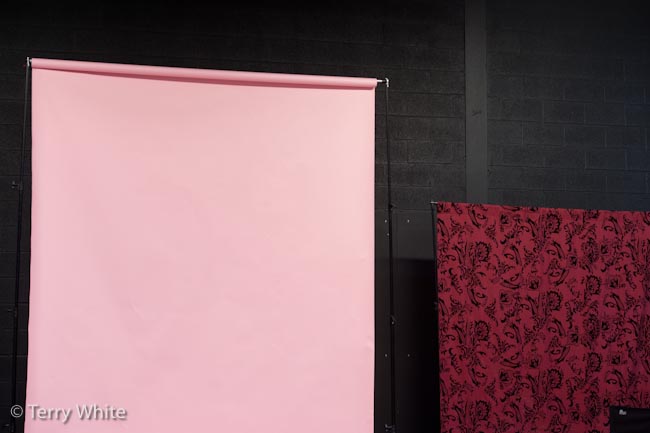 As you can see the Avenger stands go the extra mile enabling you to get lower and shoot upward without the fear of hitting the top of your backdrop.

The stands are here

The crossbar is here.

Thanks Brad! You've cost me money once again 🙂