I recently added three new items to my smart home. The first one is one I’ve been waiting for the longest. When my home was built in 2016 I went with a Ring Pro doorbell. It was a good choice at the time and has worked well for me. However, my smart home platform of choice is Apple’s HomeKit and Ring is not native to HomeKit. While I was able to integrate it through unofficial HomeBridge support, HomeBridge doesn’t give it all the available features of HomeKit and now HomeKit Secure Video. While there have been a couple of entries into the HomeKit video doorbell market, one is extremely expensive and the other one doesn’t yet support HomeKit Secure Video. That all changed last week with the introduction of Logitech’s Circle View Wired Doorbell.

Logitech is no stranger to HomeKit. Their Logitech Circle cameras are in use and loved by many, but this is their first entry into the video doorbell market. Sometimes it’s better not to be first. By taking their time they got many things right out of the gate that others still struggle with. First and foremost this doorbell not only supports HomeKit but also supports HomeKit Secure Video which is Apple’s locally encrypted video stored in iCloud. Most others promise this feature in an upcoming software update or not at all. Logitech built it in from the start. They also did a great job including everything you would need including a choice of mounting brackets.

END_OF_DOCUMENT_TOKEN_TO_BE_REPLACED

I have always been fascinated by solar since I was a child. The thought that there is this giant fusion reactor in the sky that can provide power freely to the entire planet is amazing. When Tesla rolled out their NEW Solar Roof (actual solar tiles that replace traditional shingles) I was like WOAH! The only problem is that my house is fairly new. It was built in May 2016 and therefore the roof is too new to simply rip off, throw away and start over. I wasn’t willing to take that loss. I went the next best route. I had solar panels installed instead.

I had a solar system installed at the end of 2019

I wanted to take advantage of the Federal Tax Credit which for 2019 was 30%. That takes a sizable chunk off the cost of the system and resulted in a tax refund.

END_OF_DOCUMENT_TOKEN_TO_BE_REPLACED

Having worked from home over the past 20+ years the Corona Virus crisis hasn’t had a huge negative impact on my daily work. However, I realize that for the vast majority of people that are used to getting up and going out of the house to an office or place of business each day, this could be quite jarring. Couple that with having small children out of school, elderly parents and pets to take care of while you’re trying to remain productive and positive could be a bit much.

Tip 01 – You Don’t Have to Feel Isolated

END_OF_DOCUMENT_TOKEN_TO_BE_REPLACED

First off I want to thank you all for the overwhelming support of my NEW Photography Master Class on Fridays. The viewership has been amazing and I’m really enjoying the dialog. I’m excited to have a dedicated timeslot to talk about all things photography.

The first five episodes are available for replay

END_OF_DOCUMENT_TOKEN_TO_BE_REPLACED

Motion / Occupancy Sensors can make a smart home that much more smart and convenient. However, most of them suffer from slow response times. What good is a motion sensor if you walk past it and it takes several seconds to actually do what you set it up to do? Or worse it doesn’t respond at all. Walking into a dark room or hallway in the middle of the night and having the lights come on is a wonderful thing. Walking several steps into that dark room or hallway before the light comes on, not so much. I know what some of you are saying…”just hit the switch on the wall. Problem solved.” Yep. That would do it. So would getting up and changing the volume on the TV, yet you use a remote control. Convenience is convenience. Everyone has a different threshold.

The Lutron Caséta Occupancy Sensor has the best response time, but…

END_OF_DOCUMENT_TOKEN_TO_BE_REPLACED

I can’t believe that it has been almost two years since I moved away from my Apple AirPort Extreme WiFi routers. You can see my original Linksys Velop review from May 2018 here. I grew my original three node Tri-band Linksys Velop network to five nodes that year and it worked pretty well for me. However, I’m a speed freak. I want the fastest possible network speeds that I can get and I zero tolerance for dead spots. I have a fairly large network with anywhere from 110 to 130 devices connected at any given time. I also have a smart home and stable fast WiFi is a must for a smart home to function successfully. This need for speed lead me to look at the NEW Linksys Velop WiFi 6 Mesh Router.

The Linksys Velop WiFi 6 Mesh Router is a BEAST!

It’s not only significantly larger in size, but it also improves upon the Velop Tri-band Mesh Router in every way. The specs are mouth-watering.

END_OF_DOCUMENT_TOKEN_TO_BE_REPLACED 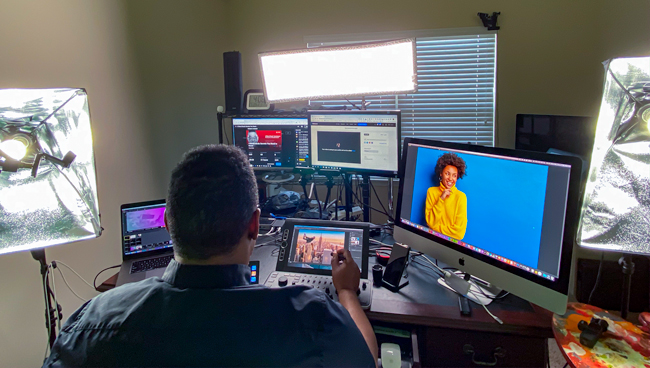 Live streaming continues to be a big part of my life. I live stream multiple times per week as part of my job at Adobe. I stream live Adobe tutorials regularly to YouTube, Facebook, Twitter/Periscope, and now LinkedIn and Behance as well. Since this is what I do for a living I wanted to continue to improve my production values. 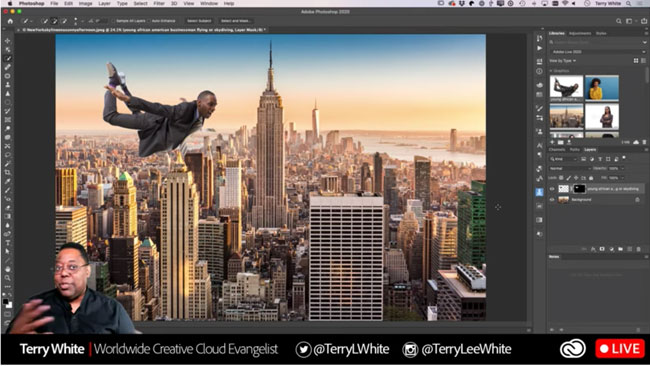 I have been tweeking my dedicated live streaming studio since 2016. Being a photographer I’ve setup a few photography studios and no matter how you equip your studio you can always find more gear that you want and ways to improve it. I’ve been building out this live streaming studio since May 2016. I have everything I “need” to do my streams, but I’m always looking out for ways to improve upon what I have or make it easier to do my streams.