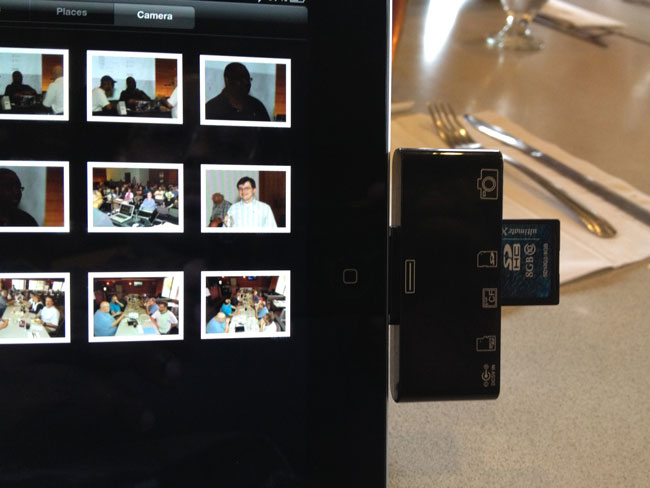 If your camera uses SD memory cards then you have probably had no issues importing images into your iPad using the Apple Camera Connection Kit. However, if your camera shoots Compact Flash then it gets a little more challenging. Apple doesn’t make a kit or adapter to allow you to import your images from your Compact Flash cards directly. However, M.I.C. does! 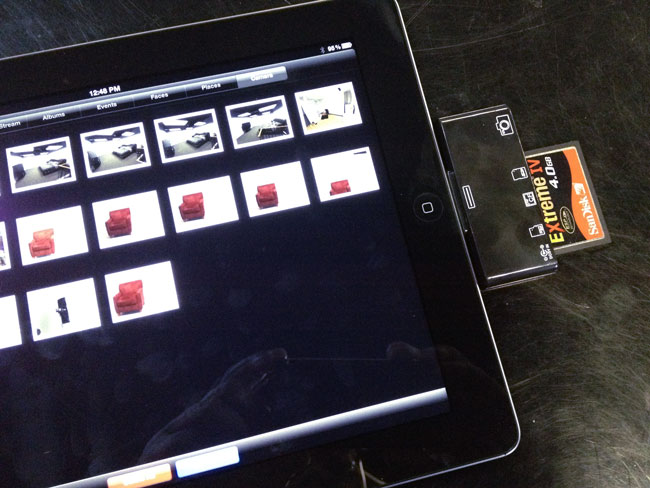 Camera Connection Kit 4-in-1 for iPad, iPad 2 and The NEW iPad

I’ve been using the original M.I.C. reader for over a year. Recently I either lost one of the two I own or I misplaced it. This lead me to go to their site and order a new one. That’s when I discovered that they had replaced the one I had with a newer, better one. This NEW Camera Connection Kit not only handles Compact Flash (CF) cards, but it also handles SD, MicroSD and a direct USB connection to your camera. This effectively eliminates the need to carry both the M.I.C and the Apple one as it will import images from both my SD and CF cards.

One of the hurdles in supporting CF cards is that the higher speed ones use more power. A while back Apple purposely dialed down the amount of power available via the iPad dock connector as they didn’t want people connecting all the peripherals they were starting to connect to it (I can only guess they did this to eliminate all the support calls for what people might connect to an iPad). M.I.C originally said that they wouldn’t support cards over 400x in speed, but this new Connection Kit also comes with a USB power cable to the adapter. If you have a card that draws more power than the iPad will handle you can plug in this cord to the adapter and your USB wall charger and get more juice.

Over the weekend I was at a meeting where a photographer was taking pictures. He handed me his SD card and I imported his Canon RAW shots right into my iPad. No problem. Yesterday, I decided to try it with the CF cards from my Nikon D4. This is where I discovered that although M.I.C. includes a power solution, you can still have cards that won’t work. For example, my SanDisk Extreme IV cards worked fine, but my newer Transcend 32GB 400x CF cards wouldn’t work at all. Even when I plugged in the power cord, the card wouldn’t mount on the iPad.

There are lots of knock off 3-in-1 and 4-in-1 readers for the iPad that are cheaper than the M.I.C. solution. However, most of them don’t work on the New iPad at all! Although the M.I.C. 4-in-1 Connection Kit worked fine on my New iPad, there was still at least one particular CF card that it couldn’t read. Therefore I would recommend that you test your cards before heading out on your trip with your camera and iPad only. Lastly, the New Photosmith 2.0 App makes the sorting, flagging and metadata process on the iPad much nicer especially if you’re a Lightroom user. When you get back with your iPad you can simply sync all your RAWs, JPGs, and Collections to Lightroom wirelessly!

You can order the M.I.C Camera Connection Kit 4-in-1 here.