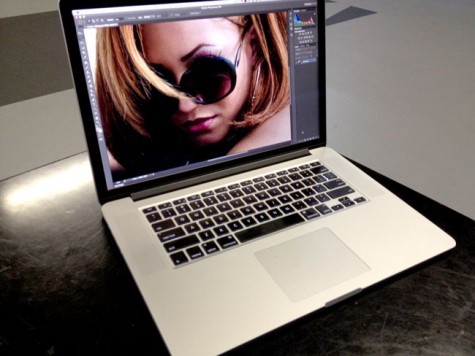 Apple lowered the price of MacBook Pros with Retina Displays and the MacBook Air. B&H Photo lowers some models even more.

As rumored, Apple introduced their NEW MacBook Pro lineup today and while they didn't introduce the MacBook PrAir that I'd hoped for, these new machines are noteworthy in terms of performance features. The most notable enhancement is the new "Thunderbolt" (aka Light Peak) multipurpose port offering up to 10Gbps data throughput. This makes it the fastest I/O port that Apple has ever used on a notebook offering speeds that are 12 times faster than Firewire 800. The next notable update is the move to the Intel Quad Core "Sandy Bridge" processors. Lastly in the notable update area is the upgraded "FaceTime HD" camera offering a much higher resolution image over the previous iSight camera. Apple also moved to AMD graphics cards. I had hoped for faster Nvidia cards with 1GB of RAM or more for Mercury (effects) Playback in Premiere Pro CS5, but the good news is that Premiere Pro rocks with real-time GPU playback on AMD too.

Get all the specs here.

So what will I do?

Although I had hoped for a New MacBook Pro that was closer to the MacBook Air in terms of weight, I can't argue the potential of these new notebooks for making my work and demos go even faster. I look forward to a NEW 15" "work" MacBook Pro (is the store back up yet? 🙂 ) However, I had a backup plan in case these weren't the new lighter weight models that I dreamed of and that plan is to buy a 13" MacBook Air to be my "personal" notebook. Granted I do personal stuff on my work notebook and I'd probably do work on my personal notebook, but having the choice of either one depending on my needs for a particular trip would be great. This way if I'm NOT traveling to do a demo/teach a class where I need all the horse power I can get, then I'd bring the Air. I'd probably also use the Air around the house along with the iPad. With services like Dropbox.com keeping files in sync between multiple computers is not a problem these days. So that's my plan.

Here's a video by my buddy Dave

I've always been a fan of the size and weight of the MacBook Air. However, due to the low end performance that they typically have I could never use one as my primary notebook. It's rumored that we will see New MacBook Pros sometime in March and it's also rumored that Apple will take some design cues from the MacBook Air and implement them in the MacBook Pro. For example, eliminating the optical drive. That got me to thinking about what I would want in my next MacBook Pro? Here's my wishlist:

I really could live without the optical drive. I only use it every blue moon these days and as long as there was an option to use the external SuperDrive when I needed to, I'd be fine.

What really attracts me to the MacBook Air is that it's so darn light! If Apple could build a MacBook Pro with the above specs and have it come in under 4 pounds I'd order one without blinking.

Call it a MacBook Prair 🙂  – thanks Lukas for that!