If you’re a Mac user and you burn DVDs or CDs, you’ve probably heard of Roxio’s Toast application. While you can burn DVDs/CDs right in Mac OS X, Toast just offers so many more features beyond the basics. I was very curious to see what the new version(s) had to offer so I caught up with the Toast product manager and asked him:

One of Apple’s big 3 announcements during the Phil Shiller keynote was the newly redesigned 17″ MacBook Pro. As you know I reviewed the 15″ MacBook Pro earlier and the 17″ has all of those same features but adds a little more…
The one thing that I find very attractive is the ability upgrade the 17″ MacBook Pro to 8GB of RAM!!! That’s unheard of on a laptop. Although I’m still not ready to carry a 17″ laptop again, I find the new very tempting. Apple also allows an “Antiglare screen” option which should make the professionals much happier. The use of a glossy screen has been a point of contention with many users. Although this will be welcomed, the NEW controversy will be the fact that the battery is built-in and not user removable or swappable. Granted the battery life has been drastically improved (Apple is claiming 8 hours!), it will be interesting to see if people buy in to the fact that they can carry an extra battery on long trips or to do work in the field.

I’m sure it comes as no surprise to you that with thousands of Mac users in town for Macworld Expo, there would also be thousands of iPhones in use! As a matter of fact there are so many iPhones here this week that AT&T’s data network was brought to its knees on Tuesday during and after the keynote. You could make calls, but you could just about forget about using the EDGE or 3G network.

Google is showing how they think ahead by providing an iPhone charging station for up to 8 people to charge their iPhones in the Google booth at a time. Obviously you’re not going to leave your iPhone unattended, so what are you going to do while you wait? Check out the stuff that Google has to offer. Genius!

I’m here at Macworld and I got a chance to check out the new software update to the Neat Receipts scanner that I reviewed in 2008. One of the number one questions I got then was “can the software (which rocks) be used with other scanners like the Fujitsu Scan Snap series. Now the answer is YES!

I’ll be posting some video updates over the next day or so of cool things I’m checking out here at Macworld Expo. I’m going to start with a product I’ve been meaning to review here. It’s the Joby Gorillapod SLR. Although this is a great portable, travel tripod for your Digital SLR, I found out today that it has some other cool uses. Check it out! 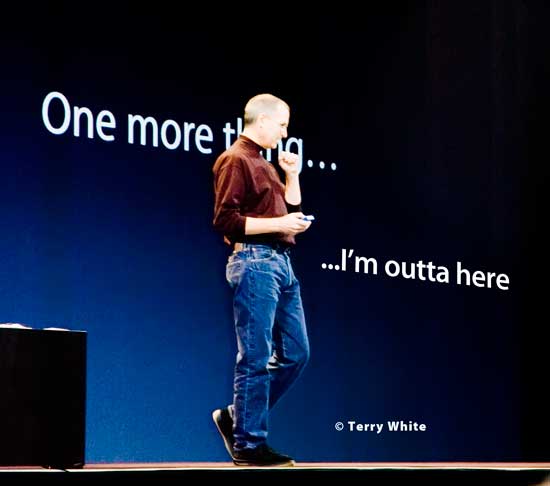 According to this press release, this will be Apple’s last Macworld Expo and Steve Jobs will NOT be doing the keynote address. I’m sure this is a huge blow to the show organizers! Without an Apple presence, this show will likely die. Why? Although there are hundreds of Mac based exhibitors, the big draw was Apple, Inc. Without Apple, the show could go on, but most likely will not. You might remember there used to be two Macworld Expos. One on the east coast and one on the west coast. When the show organizers (IDG) decided to move the show to back to Boston (it’s original roots), from NYC, Apple said NO! Once Apple stopped exhibiting, the show died. I predict the same thing for the San Francisco show. So will there be a Macworld Expo in 2010? Maybe, but I’d bet money that there won’t be one in 2011!

Yes and no! Before the web, we relied on trade shows to get the bulk of our info and the ability to see new products. Now the minute a company releases a new product you can do everything except touch it right on the company’s website. If it’s a software product, you can usually download a free trial. With Apple’s growing network of Apple stores, that pretty much satisfies the “touch it” appeal. So it’s not hard to see why they would want to stop spending millions of dollars on trade shows. Apple really doesn’t “need” Macworld Expo.

On the other hand trade shows are great networking opportunities and a great way to see multiple vendors all in one spot. I enjoy going to shows like Macworld Expo and Photoshop World each each year. However, I must say, without an Apple presence, this will likely be my last Macworld Expo as well.

This is unfortunate for the smaller Mac vendors that relied on Macworld Expo each year to showcase their products. Times are a changin’