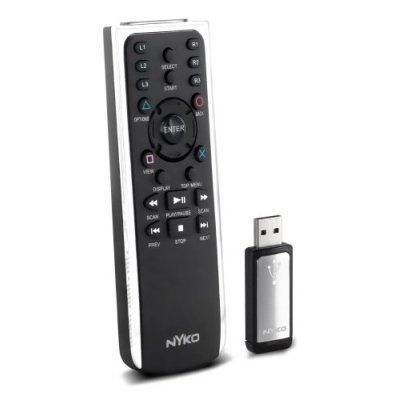 As I have written in the past, I use the Sony Playstation 3 (PS3) as my Blu-ray player in my home theater. It works great, however the one complaint that I had with it was that I couldn’t control it with my favorite universal remote (which happens to be a Sony remote). The problem is that the PS3 uses Bluetooth for its wireless game controllers AND for the Sony DVD remote.  I have the Sony PS3 DVD remote and as you may have guessed, it only works with the PS3 and controls nothing else. Also I have say that it kind of sucks as a remote in general. In typical Sony fashion the PS3 DVD remote is BLACK and impossible to see in the dark. There is no light on it and it doesn’t even have glow in the dark buttons. The Sony PS3 DVD remote is Bluetooth based which is why it doesn’t work with anything else but the PS3.

The good folks at Nyko have created a remote that uses IR instead of Bluetooth. Their Playstation 3 Blu Wave Remote comes with a USB dongle that plugs into the PS3. Then you can use their remote to control the PS3. So here’s what I did. I plugged in their dongle and then I put my Sony Universal Remote in "Learning mode" and I used the supplied remote to teach my universal remote the commands to control the DVD/Blu-ray playback of my PS3. Next I put their remote in a drawer. That’s it! I now have ONE REMOTE that controls my home theater environment again. So if you have a favorite universal remote that can learn commands and you have a PS3, this will be the best $14 you’ve ever spent. Now also if the PS3 is not in a great location for IR line of sight, you might also want to get a USB extension cable so that you can place the dongle in a better location.