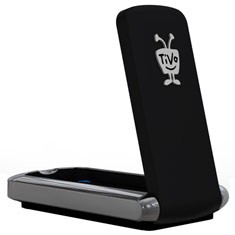 Last week I shared with you TiVo's announcement of their NEW 802.11n based WiFi adapter for their Dual Tuner DVRs including the TiVo HD and New TiVo Premiere. I said then I that I thought this adapter was over priced, but I still wanted to test it to see how much of an improvement it was over the 802.11g based one. I was totally surprised by what I saw when I opened the package.

Don't let the design and pictures fool you. The reason that I thought that the new adapter was over priced was that it looked just like the old one and therefore I figured it connected to the USB port like the old one. It doesn't! This NEW Adapter is a completely new design and instead of connecting via USB it connects to your TiVo's Ethernet port. You also have to plug it into  the AC to get power to it. Actually there is nothing TiVo specific about this new adapter. It's just like any other Ethernet based 802.11n Wireless Bridge. Unlike the old adapter you can't even configure it from the TiVo HD. You either have to use your computer or you have to have a wireless router that has a WPS button. Although my New TRENDnet router does have the WPS button, I opted to just configure it directly by plugging into my MacBook Pro via Ethernet. Configuring it was pretty straight forward and once I was done I plugged it into my TiVo HD and it worked perfectly!

The Bottom Line – Is it worth the price?

First off, if you can run ethernet from your router to your TiVo, then run ethernet! It's cheaper by a mile. However, if you have your TiVo in a room/location where it wouldn't be practical to run ethernet then you will need a wireless option. Although I came down on TiVo for the price of this adapter initially, They priced it pretty much in line with other 802.11n Wireless Bridges. For example, here's a Linksys that's about the same price but it's bigger and bulkier than the TiVo model. So you're not paying much if any over what you would pay for other name brand solutions. With that said, since this has no direct TiVo integration, you could use ANY 802.11n wireless bridge and get the same results. Also since this is not TiVo specific it could be used with other devices such as your Blu-ray player. Once you set it up you could use it with any device that has an ethernet port and you want to make it wireless.

Compared to other wireless bridges the TiVo adapter is smaller and more attractive. Style does matter to me so if all things are equal price wise, then I would go with the TiVo adapter.