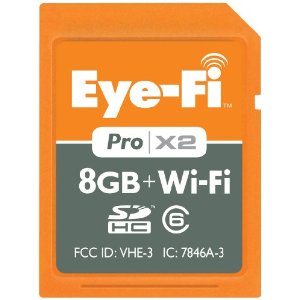 If you’re a photographer and you own an iPad you probably already know the benefits of showing off your photos on that nice 10″ display. However, chances are at some point you also had a wish to get your images to your iPad either directly from your camera (tethering) or from your computer wirelessly (not having to sync them over via iTunes – even typing it sounds so outdated). There are ways to do it! I’m at Photoshop World this week and I got a chance to try a new combination (new to me anyway) of the latest Eye-Fi Pro X2 SD card and a cool App called Shuttersnitch for iOS. I reviewed the first Eye-Fi a little over 3 years ago. While the technology worked backed then, and like I said in my review at the time, I really didn’t have any use for it. Back then the idea was this card would wirelessly and automatically transfer your images to your computer or a photo sharing site. First of all I have no interest in uploading images to a photo sharing site directly from my camera without some post processing. Secondly even the transfer to the computer was way too slow. You might as well just pop the card in your card reader and transfer them over in a fraction of the time. Lastly back then the card didn’t support RAW files. Yep, it was a non-starter for me. After I did the review I never touched the card again.

3 years later…I have a use for Eye-Fi cards

As with most technologies, they tend to improve over time. While I still have very little interest in the Eye-Fi cards for wireless transfer to my computer (still a bit too slow) or uploading directly to a photo sharing site, I’m intrigued by the thought of shooing wirelessly into my iPad. While there are other tethering solutions for the iPad out there, they tend to all involve using a computer in the middle of the process to tether your camera to and then transmit the images via WiFi to your iPad. This solution doesn’t require a computer beyond the initial setup of the Eye-Fi Card itself. 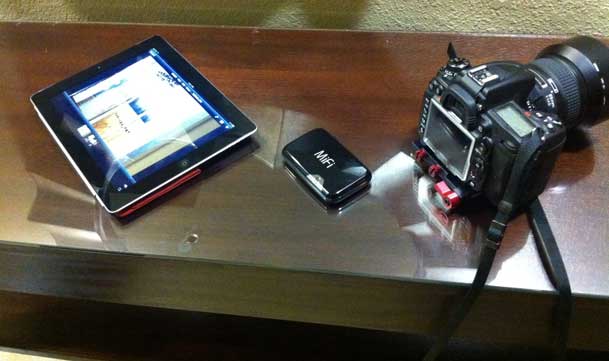 First you need an Eye-Fi Card. I went with the Eye-Fi Pro X2 8GB card because it’s the only that does support RAW files. If you don’t care about shooting in RAW then you can use one of the less expensive cards. The card comes with a card reader and the software you’ll need to install for your Mac/PC to set the card up. The Eye-Fi card has its own built-in WiFi chip and this latest model supports 802.11n which helps out a lot on the speed! After configuring the card to join your wireless network, you need to disable all other image transfer options. In other words, just setup the card to join your hotspot, but NOT to transfer images to your computer.  I shot with my Nikon D7000. For a mobile hotspot, I used my UNLOCKED GSM MiFi 2372 hotspot. It should work with just about any WiFi network as long as both the card and iPad are on the same network. It also should work with the Personal Hotspot feature of the iPhone.

Next you’ll need the Shuttersnitch App

The Shuttersnitch App is the App you’ll need on your iPad to talk with your Eye-Fi card. While this App does have native Eye-Fi support built-in, it’s not limited to Eye-Fi cards. It will work with other wireless camera solutions. I hear that David Ziser and his sidekick Damie Tepe are running around here at Photoshop World somewhere showing this with the Canon Wireless Transmitter (instead of the Eye-Fi Card) and getting some SPEEDY transfers (like 1.4 seconds of FINE JPGs) directly, sans the mobile hotspot (probably in an AdHoc mode). I’ve got to check him out and see how he’s doing this?

Once you log into your Eye-Fi account via the App it sends the secret signal over to your selected Eye-Fi card to pair the two together. Now when both your iPad and your Eye-Fi card in your camera are on the same network, your images will automatically transfer over to the Shuttersnitch App so that you can view them right on your iOS device.

See my Shuttersnitch review here or you can just go ahead and buy the App here from the .

What about the transfer speed?

This was the big question I had that I couldn’t seem to find an answer on, so of course I had to try it myself. It’s good, but not great! As you might expect RAW files are going to be slowest. It could take anywhere from 20-30 seconds to transfer a 14MP RAW file from my D7000. The story gets much better if you shoot JPEG. When I shoot JPEG I get anywhere from 9-13 seconds depending on the JPEG quality setting I use. Also keep in mind that the images are still on the card too for transferring to your computer later. An even better workflow for my Nikon D7000 is to shoot JPEG BASIC to the Eye-Fi card for the fastest transfer to the iPad and RAW to the second SD card slot. Finally! A reason for me to like RAW+JPEG shooting. LOL, Thanks Jason for the idea.

Here’s an idea of how it works:

What about Compact Flash?

Eye-Fi cards have always been aimed at consumers and like it or not SD is the predominant format in consumer cameras. However, don’t fret my CF shooting pro friends. With this adapter you can can stick an SD Eye-Fi card in your CF based camera. NOTE: This Adapter does NOT work with the newest X2 cards and also keep in mind that this is NOT officially supported. You do so at your own risk!

If you’ve got an iPad and an SD based camera, the Eye-Fi Pro X2 card plus the Shuttersnitch App is a nice way to go. If you have a CF based DSLR camera, then you might want to consider other wireless transmitter options.

16 Replies to “Shoot Tethered (Wirelessly) to the iPad”