I was talking with my buddy Larry Becker at Photoshop World about ring flashes and how I wanted to try one, but wasn’t sure which one to go with. He said, “well until you make up your mind, why not try out the Rayflash to see if you like the look before you make the investment?” Larry (being the really cool guy that he is) sent me his Rayflash to try out.
So I thought I would share with you how it works via this video:

Ring flashes create a very distinctive kinda flat lighting look that seems to be very popular in today’s fashion industry. I really like the catch lights that you get from using standard ring flashes. However, the Rayflash doesn’t create those catch lights that I like. It’s mostly a limitation of its design and it’s not a complete circle of light. However, it does create that “ring flash” light look for less money than a standard ring flash if you already have a speed light. 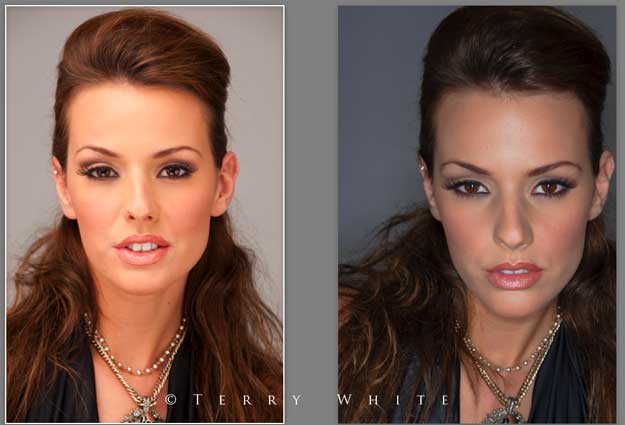 My standard beauty light setup on the left with a softbox and tri-flector and the Rayflash attached to my SB-800 on the right. Both photos are unretouched.

Next is the price. The Rayflash first came out at $299 which most people thought was way overpriced for something that is basically a light modifier and doesn’t have any electronics in it. However, the price is now $199. That may still seem pricey, but it is cheaper than most dedicated ringflashes and a heck of a lot lighter to carry and travel with.

So the big question: would I buy one? Yes and no! The Rayflash does what it’s supposed to do and it does provide that typical ring flash look. However, I really really really like the circle of distinctive catch lights produced by a true ring flash. So I would probably hold out and get a standard ring flash or another solution because I want both, the look and the catchlights. That’s not to say that I wouldn’t buy a Rayflash to have in my arsenal and certainly to travel with! If the budget allows for it, the Rayflash is a good option. You’ll also probably get much better results than use just the speedlight alone. Light modification is goooooood!