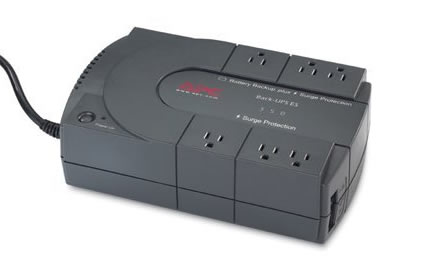 Tis the season for power outages! Last year I invested in a whole-house natural gas backup generator. I work from home (and am spoiled rotten by power consuming technology) and therefore, I can’t stand prolonged power outages. Remember the blackout of 2003? Buying the generator was like buying insurance. Once you have it, you never seem to need it (and I’m ok with that). The power has not been off for more than 5 minutes since I had it installed. Figures right? Well that all changed a couple of nights ago. The power went off at 4:30 AM Saturday morning! How do I know the exact time you ask? Well when the utility power goes off, my generator kicks on within 10-15 seconds and powers the whole house. It’s located on the opposite end from by bedrooms so I never hear it. Normally I would have slept right through such a faint motor sound. However, I have APC UPS (uninterruptible power supplies) throughout my house to provide backup battery power for my gear for those few seconds that it takes the generator to fire up. It was on this night that I found out what it’s like to have 10 APC UPS systems go off at once!

APC Battery backups "BEEP" when there is a loss of power. The idea is is that this will alert you so that you can go to your computer, save your files, exit your apps and do a normal shutdown until main power is restored. In my case that should only be 10-15 seconds right? Well not quite. I found out the hard way that UPS systems are very sensitive to the actual quality of the power being supplied to them and it seems that generator power is not quite good enough when the APC units are on their default setting of "high senstivity". So my UPS systems continued to stay on an BEEP even though there was "power." Needless to say I wasn’t able to sleep through it. At this point I wanted to yank these things out of the wall, throw them in a pile and light a match! Even my larger ones that did not stay on continuously beeped every 10-20 seconds to let me know that line conditions were not ideal.

I remember after the initial installation and testing of my generator (the UPS’s were beeping then too) that my generator installer told me that I would need to change the settings on my UPS systems to make them less "sensitive." In fact I did just that on my larger units and didn’t know of any way to do this for my smaller units. However, it didn’t stop the beeping! Since I was awake anyway, I grabbed my laptop and Googled "turn off the APC beep" and the results lead me to various discussion threads (some really old) about how it could be done with the supplied APC Power Chute software. That’s where the fun began!

Windows to the rescue?

As most of you know, I’m a Mac guy. I have nothing against Windows or Windows users, I just prefer the Mac and have used the Mac OS since 1984. So let’s not get into that debate here. However, I also run Windows XP on my MacBook Pro via Boot Camp and Parallels. Why am I bringing up Windows? Well as it turns out, APC makes the Power Chute software for both Mac and Windows. However, the two versions differ as much as night and day. The Mac version is very basic and simply allows the Mac to communicate with the APC units and if there is a power outage the Mac will automatically do a shut down.

Here’s the interface to the Mac version of Power Chute: 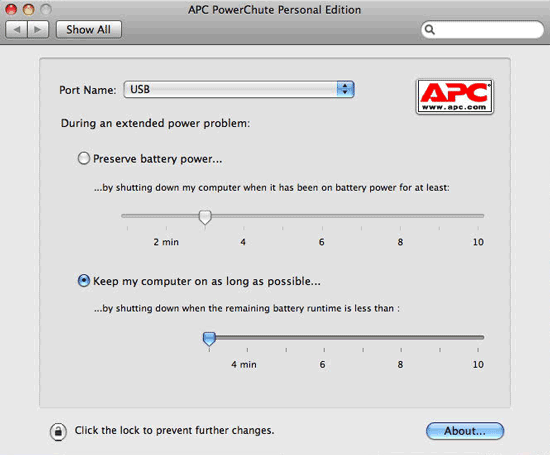 Guess what? You don’t even need their software for this. Apple has built that functionality into the Mac OS via the Energy Saver System Prefs: 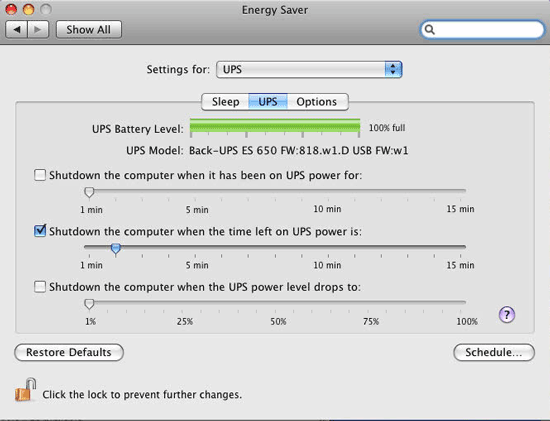 So if you’re a Mac user, don’t even bother installing the APC software. Just plug in the supplied USB cable into your APC and into your Mac and you can control it from the Energy Saver prefs.

As you can see from the above screen grab there is no other controls over the unit itself (nope, nothing under Options either). After doing a little digging, I found that the Windows version offers WAY MORE! So I rebooted my Mac into Windows XP (Parallels works too without rebooting, but I wasn’t sure if it would see the APC at the time. Later I tested it and it does.) using Boot Camp and popped in my APC CD that came with my latest unit. It had Power Chute 2.0 for Windows XP and I was floored by the available options: 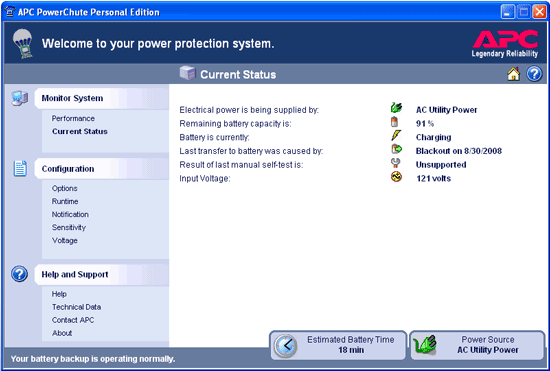 There were two settings that I needed to change. The first one was under Notifications. I don’t want my APC units beeping EVER! If there is a power outage here, it won’t be for more than a few seconds because my generator will kick on. So therefore, I don’t need to hear any beeps ever! Especially at night. There was even the option to turn off the beeps in the evening and still have them on during the day. However, I don’t want them at all: 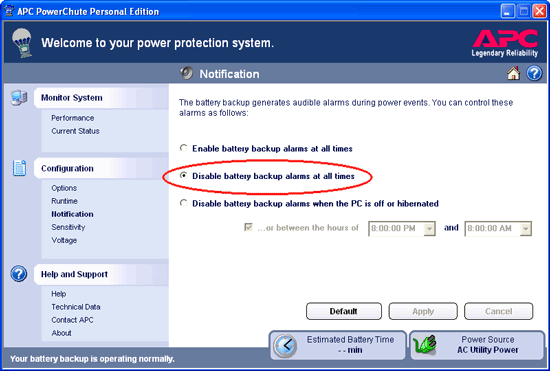 The next and most important setting was the magical "Sensitivity" setting. This allows the APC to be a little less sensitive and recognize generator power as being good enough to power my equipment. 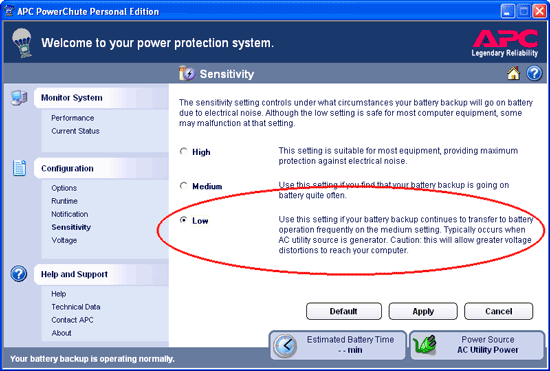 I took my laptop around to each APC unit and set these settings for each one. I was back in bed by 6AM for another few hours of sleep. Of course this was on a Saturday when I didn’t have to wake up early! Arggghhhhhhhh!

Shame on you APC

I’m happy that I was able to solve my problem without a single call to APC. If my generator installer had never mentioned a "Sensitivity" setting I would have never known to look for one. I was initially going after disabling the beep sound when I found the Sensitivity section. So it all worked out. However, not all Mac users have Windows installed on their Macs. Since APC bills their units as for both Mac and Windows, I would expect the same level of control over the hardware on either platform. APC you need to provide these same options in the Power Chute for Mac version.