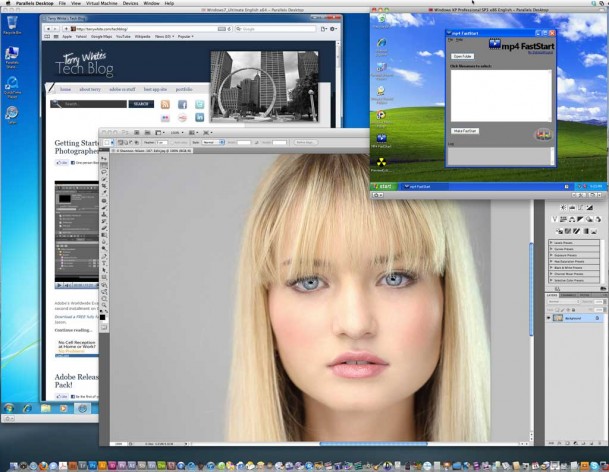 Most of my day to day work is done in the Mac OS. However, there are times when I need to run Windows app/utility here and there. I can remember the days when I used to carry two laptops for work. I had a PowerBook for doing demos to Mac customers and an IBM (now Lenovo) Thinkpad for doing demos to Windows based customers. Once the the MacBook Pro hit the scene I was quick to jump on board because I could now use this one laptop to run both Mac and Windows Apps. Apple allows you to enable a feature called "Boot Camp" right in the Mac OS itself. With Boot Camp you setup a partition (size of your choosing) and natively install a copy of Windows (not included) on it. Then you can choose to boot up the computer in either OS and Windows running under Boot Camp is just as fast as running Windows on any other similarly spec'd PC. While you do get to run Windows as fast as your Mac hardware can, you have the disadvantage in that you can only run one OS at a time. In other words while you're booted in Windows in Boot Camp, you don't have access to your Mac apps. This is where virtualization Apps come in. The two top contenders are Parallels and VMWare's Fusion. I've had experience with both Apps in their latest versions and given the choice I'd go with Parallels.

When you have two apps that basically do the same thing, you have to look at "how" they do it?

Both Apps are great and both apps have very similar feature sets. Although I get to use VMWare's Fusion at NO COST TO ME because my company has a site license and offers it to any employee that needs it, I prefer to use Parallels (and buy it out of my own pocket). Both Parallels and Fusion allow you to use Windows on top of the Mac OS. This means that you are running both OSs at the same time and can launch apps in either. Both are going to run a bit slower than running natively in Boot Camp if for no other reason, they are sharing resources with the Mac OS running at the same time. However, being able to run the occasional Windows app without rebooting is worth the small performance hit. Both apps allow you to either run Windows from a "file' on any hard drive (including an external drive) or even use your Boot Camp Windows installation. So if they both seem to do the same thing, what makes one better? SPEED!!! Parallels with version 6 continues to have the advantage over the competition with SPEED! No other way to say it other than it just runs Windows FASTER. According to Parallels, version 6 is up to 80% faster than version 5. It's 64 bit and boots Windows more than two times faster than Fusion 3.1. Parallels 6 scores more than 2 times better on 3D graphics than Fusion 3.1.

When I got my new MacBook Pro earlier this year I put off re-installing/partitioning Boot Camp. It wasn't really intentional. I just never took the time to do it. After running Parallels 6, I may not do it all. Like I said, I don't run Windows apps often and running Parallels with a Windows 7 virtualization file takes up less space than a dedicated Boot Camp partition. Also Parallels allows you to suspend Windows so that you can re-launch it the next time and pick up right where you left off without having to reboot Windows from scratch.

If you are a Fusion user and you want to try Parallels 6, you don't have to start over. Parallels 6 will open and convert your Windows image file from Fusion. I did this with one our corporate supplied images of Windows 7 for Fusion and it worked perfectly. I also converted my old Windows XP image with no problem.

Run Windows on your iOS Device?

Not really. However, Parallels also released an App for your iOS device that allows you to remotely access your Mac running Parallels 6 and of course run any Windows Apps you have installed. Although the App is free you need to be running Parallels 6 to use it. It's a universal (+) App and therefore takes full advantage of the iPad too. While I think this is a cool feature I have no use for this, so I've not tested the App. You can download the App for FREE here from the

You have lots of options of running Windows on a Mac. However, if you're looking for a slick, polished way to do it as fast as you can without having to boot in Boot Camp, Parallels Desktop 6 is your answer.

Parallels Desktop 6 for Mac goes for $79.99 here. Keep in mind that it does NOT include a Windows OS (none of the above solutions do). So you'll also have to buy a full version of the version of Windows that you want to run.