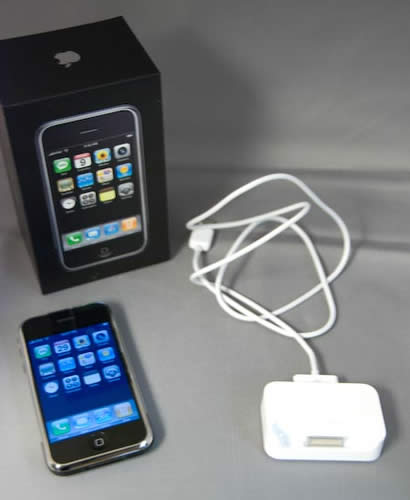 I was able to snag an iPhone at my local Apple store today! I was in and out of the store by 6:15PM. Everyone in line (over 100) seemed upbeat and friendly. Apple had a very cool display in the window that counted down the last 30 minutes before the doors opened at 6PM.

Now on to my initial impressions…

First I must say that Apple did an excellent job not only organizing the rollout in their stores, but they also did a great job with the packaging. The iPhone is in a box no larger than it needs to be which should appease the eco groups out there. The iPhone box includes the iPhone of course, a dock, a USB to iPhone /Dock cable, earbuds with integrated mic/remote and a USB wall adapter for charging that is about 1/3rd the size of the old one.

After unboxing my iPhone I plugged it into the dock and USB port on my MacBook Pro. iTunes 7.3 fired up. Although the phone was in the source list it was not selected by default. So I sat there a few seconds waiting for something to happen and nothing happened until I clicked on it. Then I got the walk through to either transfer an existing number over or set up a new account/phone number on AT&T. Since I already have a family plan account, I just had to add this new phone to it and it gave me a new phone number (couldn’t use my old number because it’s tied to my corporate account at work). That process took less than two minutes and the phone was activated! I couldn’t believe how fast that went.

Next I began the process of syncing my content. It’s all done through iTunes. I was able to sync all of my contacts, all the calendars I wanted, my email accounts, Safari bookmarks, favorite songs, favorite videos, favorite podcasts, and a few movies. Now I only have about 236MB left out of 8GB. However, I got it all on there! Including a full length movie just to test. That movie takes up about 1GB and I can delete that once I’ve tested/watched it. I would have loved to have had a 16GB iPhone, but 8GB will do for now. 4GB is definitely not enough for my needs. Syncing took a while. Longer than I expected, but not too long. It probably took about 20-30 minutes to sync everything including 855 contacts, many with photos.

The first thing I tried was the web browser, not sure why. Since it detected my Wi-Fi network it asked for the password for it. I have two networks. One with WEP and one with WPA security. No matter what, the iPhone would NOT logon to my WEP network with the password. I had to finally dig out the HEX key and key that in, which leads me to the virtual keyboard. It’s not bad, but it’s not great either. It will definitely take some getting used to. The HEX key was a challenge because it consists of just about every other character being a number. The iPhone virtual keyboard displays letters or numbers but not both at the same time. So I would type a letter and then have to switch to the numbers just to type a number and then back again. It’s also not apparent to me how to do Caps Lock. I tried double tapping the shift key and holding it down. Neither one worked. So with each letter I had to also press the shift key (although this may not be necessary for HEX). Granted this was not the normal use for the keyboard. Later I typed a few emails and while it works, the auto correct could be better. It seems to not suggest the word you’re trying to type until you’re on the last letter or two. By that time you can just finish typing. It would be great if it would LEARN as you go to get better. Not sure that it does. I haven’t tried EDGE yet for web/email. I’ll do that tomorrow when I’m out and about and away from Wi-Fi. However, Wi-Fi is VERY FAST and I’m afraid that I’ll be spoiled rotten by it. 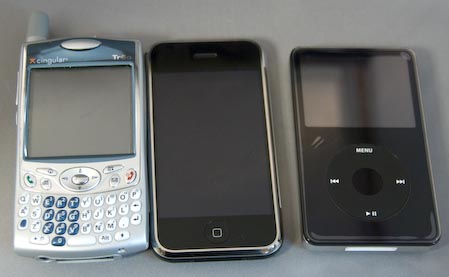 The iPhone is beautiful! It’s got a bright easy to read screen and it feels so small in my (larger than most) hands. Almost a little too small. Again, your hands are different and therefore it may feel just right. While early reviews say that they didn’t have a scratch on it, the back looks like it would scratch up over time. I have no proof of this, it’s just my observation.

The iPhone looks to be less than half as thin as my Treo.

Does it live up to the hype or not?

Actually so far I would have to say yes. Keep in mind that I have my complaints about missing features that I will cover more thoroughly in the full review. However, my initial impressions are very good. I can see kissing my Treo 650 good-bye. Palm should be very afraid right now. It’s slick, it’s sleek, it’s fast, it has a beautiful UI (user interface) and works as advertised (so far in the few hours I’ve had with it). Can it be improved upon? ABSOLUTELY!

Can it be used for DUN – use it as a wireless modem to your MacBook, PowerBook, etc.?

Can you Redial/Answer from non-Apple headsets?

Phone
Does it use a SIM card that is user accessible?

Does the iPhone support voice dialing?

Will there be a VoIP solution for making calls while on Wi-Fi?

Can I use iTunes songs as ring tones (mp3 or AAC)?

Can I assign ring tones to contacts?

How is it for one hand operation?

Is there a single button speed dial feature? (looking at the tutorial, it takes at least two taps to speed dial)

Calendar
Does the calendar have Alarms?

Can I add/modify calendar entries from the handset?

Does it have multiple Calendar support from iCal?

Notes
I assume this will sync to the new Mail app in Leopard, however what other notes programs will it sync to?

iPod
Can I listen to music over Bluetooth?

Can I sync music from one computer and contacts/calendar from another?

Web/Internet/Email
What happens when you visit a site that has Flash content?

Does it have connectivity to MS Exchange servers beyond IMAP?

3G support (when? and will my version 1.0 phone be upgradable to it?)

Will there be .Mac integration?

AT&T
What will the data plan(s) cost?

Can you put it on a corporate plan?

Do I have to activate it on the spot?

Other
Is there a GPS option, coming?

Does it have an Alarm Clock?

Does it have a World Clock?

Can I use my own sounds for alerts other than ringtones?

Does it have Unit conversions in the Calculator?

More later after I do some more playing.

18 Replies to “My iPhone first impressions…”