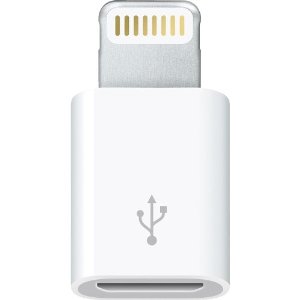 One of the downsides of upgrading to a new iPhone 5, iPod touch, iPad mini or iPad 4th generation device is that the traditional 30 pin connector that we’ve known for years has been replaced with a smaller “Lightning” plug. Initially Apple introduced a 30 pin to Lightning adapter and cable adapter. However, shortly thereafter they also released this very small Lightning to Micro USB adapter. What I like about this one in particular is that Micro USB cables and chargers are everywhere! Every other smartphone being sold today charges via Micro USB. So does my bluetooth headset, Jambox speaker and a variety of other gear I carry. With this small fingernail sized adapter I can use any of my existing cables/chargers to charge my iPhone 5 or iPad mini.

In my opinion all of these adapters and cables are overpriced, but it appears that the knockoffs either don’t work or are very poorly made. Until I find a good knockoff, I’ll keep buying the Apple branded adapters. You can get the Lightning to Micro USB adapter here.