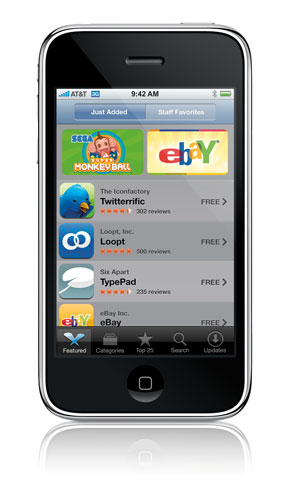 On Monday I wrote a post listing My Top 10 Favorite iPhone Apps and I got a lot of good responses to that post including a couple of suggestions for Apps that I didn’t even know existed (I love iFlix, thanks!). One thing I thought about the next day was “what apps would I like to see?” So here are the Apps that I would LOVE to see on the iPhone and most of them I’d be willing to pay for:

When the iPhone SDK was introduced the folks over at Sling said that they were working on a player for the iPhone. This player would probably only work over 3g and Wi-Fi due to the bandwidth requirements. I haven’t heard any official updates lately. How’s it going Sling?

Now that I have a couple of TiVo HD’s which can be “scheduled” via the web, I’d love to have an iPhone app that would make this easier and faster than using the TiVo website. The app would have to show me my Guide so that I could pick upcoming shows and it would also have to allow for searches. Once I found the show I wanted to record, it would also have to allow me to choose which TiVo box that I wanted to record the show onto.

Rumor has it that a Sirius/XM Player is under development. This would totally rock! Right now I have Sirius in my car and I’d love to be able to listen to my favorite stations also on my iPhone via a native app. I imagine that this would be a streaming service. However, it would be killer if the stream could be buffered to the iPhone’s internal storage. That way I could listen to this content while on a flight.

I use Leister Pro’s Reunion software to do all my genealogy tracking. Now I know they are working on an iPhone app that will work with the desktop client. So here’s what I want to be able to do with that app: I’d like to be able to look up and make changes on the fly. I’d want my changes/additions to sync to the desktop client either wirelessly (perhaps through a MobileMe connection) and/or via the USB cable. I’d also want the ability to use the iPhone camera to take pictures and add them to the family member’s record.

I wrote about this a little while back, but I’m floored that Apple hasn’t developed a Location Aware, “Find Your Nearest Apple Store” app. Seems like a no brainer. This App would show you the closest Apple Stores to your current location, hours, class schedules, etc. Take it a step further and let you schedule your Genius Bar appointment. Once you decided on which store you were going to visit, you could tap one button “map” and it would route you directly to the store. I already have an Apple Store POI (points of interest) file for my Garmin NuvÃ® GPS that can do much of this, it would be great to have it on my iPhone.

I can’t think of a more Pro Apple developer than Delicious Monster. I love their media cataloging app, Delicious Library. I’d love to simply be able to take my catalog with me on my iPhone. Take it step further so that If I’m out and I buy a movie on DVD/Blu-ray that I could add it to my catalog right then and there while I’m in the checkout lane. This app would need to sync to the desktop client as well. 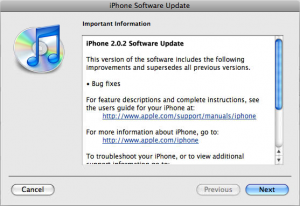 By the way, I didn’t really cover anything about the iPhone 2.0.2 update because I wanted to give it a day or two to see If I noticed a difference. Most reviewers post an immediate post saying that things are faster. Well that could be due to the fact that they just rebooted their iPhones after the update was applied. So I wanted to really see if there were any improvements. Apple has been really quiet with the 2.0.1 and 2.0.2 updates simply stating “bug fixes” in the description. So they are leaving it up to us to try to speculate what’s better and what’s not. That’s really frustrating and It would be nice if they posted a list of “areas” that were addressed. Anyway, for 2.0.2 the ONE area that I definitely see an improvement in is stability in Safari. I haven’t had a single Safari crash since applying the update. If they fixed nothing else, I’ll take that fix! I was getting kinda tired of going to websites that were somewhat complex and then moments later being returned to the Home screen because the browser crashed. Other than that I haven’t noticed any other specific improvements, however I would say that the iPhone 2.0.2 update has made the iPhone less crash prone overall. Again, this is speculation on my part after a couple days of use. No real issues with the update, although I do have a minor thing happening in that when I’m home on Wi-Fi, the display still says 3g. Wi-Fi is on and connected (because I can use the Remote app), but the display doesn’t always update. No big deal, but hey it was working properly before the 2.0.2 update.

When Apple first introduced the iPhone, Steve promised us feature updates along the way. For the most part we were getting those updates every couple of months (1.1.1 – 9/27/2007, 1.1.2 – 11/12/2007, 1.1.3 – 1/16/2008, 1.1.4 – 2/26/2008). Each update brought us a few new features and fixes. However, once Apple introduced the iPod touch (which runs on the same OS as the iPhone), the feature updates slowed down quite a bit. The problem with having both devices share the same OS is the way Apple recognizes revenue from the sales of each device. For example, the iPhone revenue recognition is spread out over the year. This allows Apple to add features to the iPhone for FREE without having to restate revenue. However, that is not the case with iPod sales. So that’s why when Apple introduces the same new features for the iPod touch they have to charge something for the update. The last update to 2.0 was free for iPhone users, but cost iPod touch users $9.95.

Here’s the problem: If Apple were to release new features for the iPhone AND iPod touch every couple of months like they had been doing for the iPhone last year, then iPod touch users would really start to feel nickel and dimed because Apple would have to charge them “something” for each update. Now it is possible for Apple to release new feature updates that only affect the phone side of the iPhone. This way they could release the same update for both devices with fixes and phone features that were specific to the iPhone. However, this means that we probably won’t see frequent feature updates for the overall device (the iPhone) like we were seeing last year. Maybe this is a moot point now that 3rd party apps are here. Food for thought though. I think Apple has its hands full at the moment working on bugs. So we’ll see what happens.