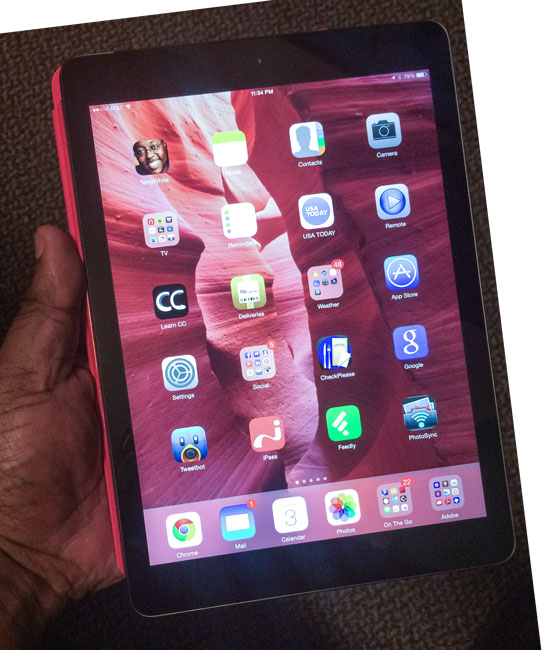 I use my work iPad quite a bit. I had been on an iPad 3rd generation (The New iPad) since it first came out. I skipped the 4th generation iPad since it really didn’t offer much in terms of an upgrade. The 4th generation iPad also came out a mere six months after the 3rd generation. I decided to wait for the next iPad. As you probably know by now, that iPad was introduced on October 22nd, 2013 and available in stores on November 1st, 2013. This iPad is a completely new design for the full sized iPad. While it still has the same size 9.7 inch Retina Display, it’s smaller and lighter in every other way. It’s narrower by reducing the bezel size on the sides. It’s also thinner and noticeably lighter in weight. So much so that I actually no longer feel the need to have an iPad mini. I prefer the larger screen size over the mini and now that the iPad Air  is lighter and thinner, my iPad mini envy has come to an end. The other thing I was really interested in was the increase in performance. The iPad 3rd generation was a good performer, but the 4th generation promised twice the performance and the iPad Air even faster than the 4th generation. The more heavy duty apps I was running the more I craved a faster iPad.

It’s impossible to pick up the new iPad Air and not notice the difference in weight. It has the feel of the iPad mini due to the form factor and curves, but all the power and full screen size of an iPad Retina Display. Once I got it set up I could immediately see the difference in performance. Apps launch faster and the iPad Air is more responsive over all. It’s definitely much faster than my iPad 3rd generation. Since I never had the 4th generation I can’t really compare against that model (sorry).  Since the iPad Air is physically smaller in size you’ll likely need new cases, covers, etc. This means that I’m now anxiously awaiting Logitech to come out with a new Logitech Ultrathin Keyboard Cover. They make the best iPad keyboards on the market. Gelaskins has already announced new iPad Air skins. The other thing I’m pleased by is that the built-in speakers are definitely louder. I use my iPad to watch TV with the HBO Go and Xfinity Apps. On the iPad 3rd generation with the volume all the way up it still wasn’t quite loud enough. Now I can definitely hear the difference in the iPad Air. Apple did the same thing with the iPhone 5/5s over the 4s. Lastly you’ll notice an increase in WiFi speed too.

I went with the 128GB WiFi+Cellular AT&T model. This is a switch for me from Verizon. I had no problems with Verizon, but since I was grandfathered into the original AT&T unlimited plan for iPad and now they allow FaceTime over 4G, I was ready to come back. AT&T has more LTE 4G coverage now than they originally had as well. Also I was running out of space regularly on the 64GB model. The other thing I appreciate is the Lightning connector for charging/syncing. It’s nice to finally be able to use one cable to charge both my iPad and my iPhone 5s.

The iPad Air is better in every way over its predecessors. There’s nothing really revolutionary about it though. It’s an iPad and it works just like all other iPads before it. It’s smaller, thinner, lighter in weight and faster. These are all the things we would expect from an upgraded device. Surprisingly though the price is the same and it’s amazing that it hasn’t changed since day one. The iPad Air starts at $499 for the 16GB WiFi version. That was the same price/configuration when the iPad launched back in 2010. If you were looking for a smaller, lighter weight, faster full size iPad, then you can stop waiting. This is the one you’ve been wanting/waiting for. While I wish the price had dropped $100, the iPad Air doesn’t disappoint and lives up the promises made by Apple. iOS 7 runs like a dream on it too. No issues to report so far. 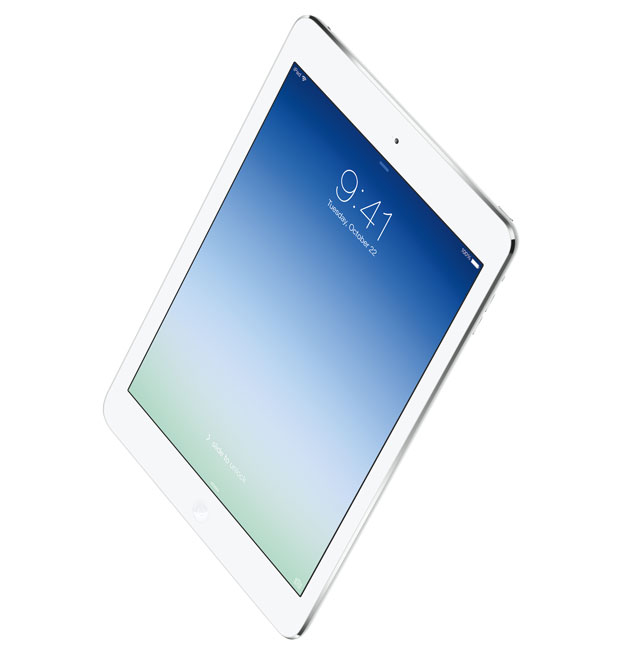 Update: Logitech is taking Pre-orders for the NEW iPad Air version of their Ultraslim Keyboard cover.