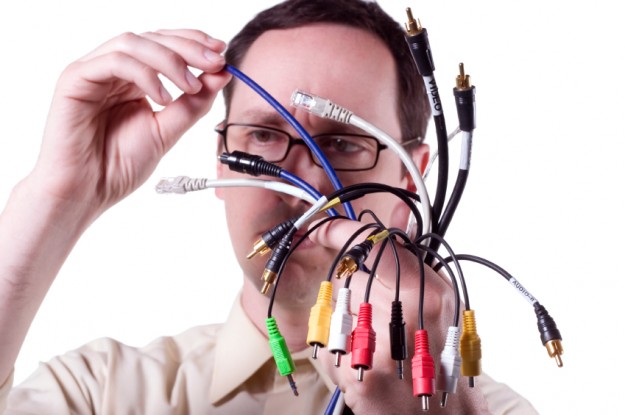 Many of you may remember my post from the summer of 2009 when I found some HDMI cables for as little as 17¢. By the way those cables are still working great! As a matter of fact I made sure to tell my friends and family NOT to be suckered into buying cables during the holiday season from the same retail outlets that they may be buying their holiday tech gifts from. In this price competitive landscape retailers often use things like cables to make up for lost margins on higher ticket items like HDTVs and Bluray players. For example, I laughed out loud when I cruised through my local Best Buy and saw this "great" deal on a Monster HDMI cable: 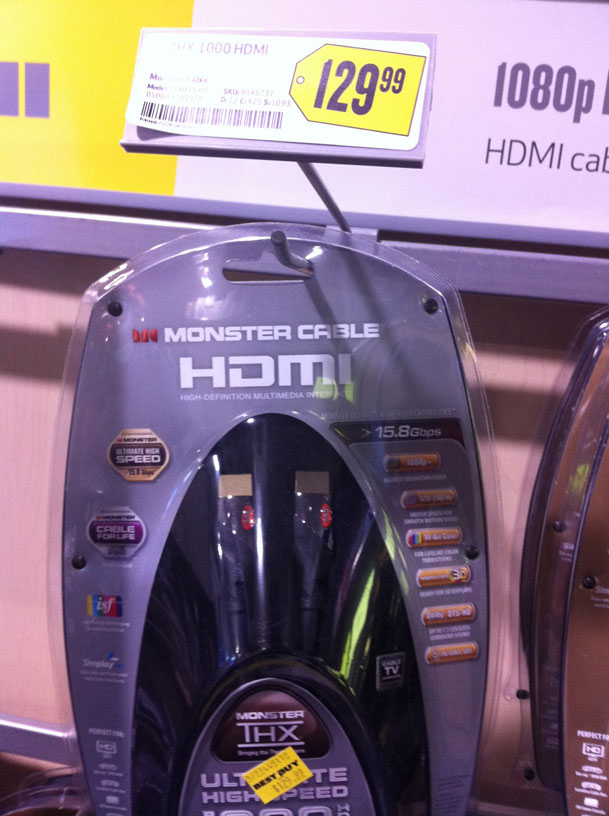 So Monster, let me get this straight…

You can get an Apple TV for less than $99. You can now get Bluray Players for less than $90. Yet you would have us believe that there is more expensive technology in your "cable" than the device it's being connected to? The bottom line is with ALL HDMI cables they are digital sending 0's and 1's. They either work or they don't! Here's a great post that explains the rip off even further.

By the way, although the cables I bought back in 2009 (I have a drawer full of them) are no longer 17¢, they are now only going for a few bucks here.

What? How does an HDMI cable outperform another one if it's all digital? OK, maybe "outperformed" is the wrong word. Let's say "more compatible". Over the holiday break I got the pleasure of setting up a NEW HDTV and receiver with all HDMI connections. I went to my HDMI drawer and grabbed the 4 cables that I needed. I hooked everything up and everything worked great. Although everything worked, there was one slight problem. Three of these components were literally either right next to each other or on top of each other and the 6 foot cables were longer than I wanted them to be. I remembered seeing some 3 foot cables at my local hardware store and they were reasonable priced around $8 each. I headed over and bought 3 of them to replace the longer ones. I plugged them in and everything was working once again. Later that evening I rented a movie via Apple TV in HD. However, when I went to watch it I got a warning I had never seen before:

"This content requires HDCP for playback. HDCP isn't supported by your HDMI connection."

WTF! Basically what this message means is that the HD Copy Protection signal isn't making its way from the Apple TV to the receiver/HDTV. I tried all the usual stuff of rebooting, restarting, etc. etc. and then it dawned on me that the only thing that had changed was the cable. I went and grabbed one of the no name HDMI "cheap" cables and replaced the GE branded cable and the movie rental played fine! It's hard to believe that there would be any cables on the shelves today that don't support HDCP, let alone from a name brand like GE, but there you have it! If you want to read more about this error, see this tech note.

It's not just HDMI Cables either!

A couple of weeks ago I finally decided to run that 100' Ethernet cable from one end of my house to the other between floors that I have been putting off for years. Of course I needed to buy the Cat6 100 foot cable to do the job. Normally I don't think about the price of Ethernet cables. There's a Staples within walking distance of my house and I typically run over there when I need a network cable. However, since it was going to be such a long cable I wasn't even sure if they carried them in stock in that length. I headed to website and sure enough they do have them, but then I saw the price: 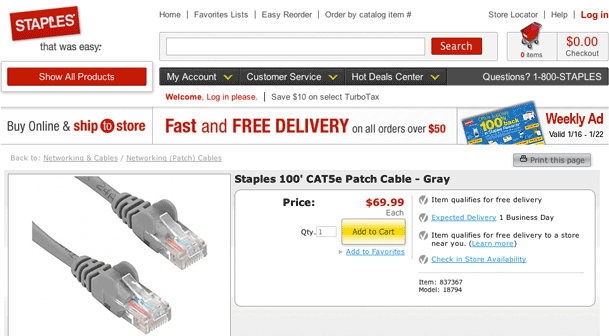 I decided to check with my local Micro Center for a sanity check:

While they were a little cheaper at $65, the cable wasn't even in stock.

Then I wondered, "are they cheaper elsewhere?"

Sure enough they were. While it would mean ordering online and having to wait for it to be shipped (darn, I'd have to put off that chore a little longer 🙂 ), the savings would be worth it. Yes, this cable that I bought (heck, I ordered two) arrived a couple of days later via Priority Mail and is working fine. By the way, the 7 foot Ethernet cables at Staples go for $19.99!

This is just a reminder! More expensive cables don't necessarily work any better or last any longer, especially digital ones. Don't pay too much! 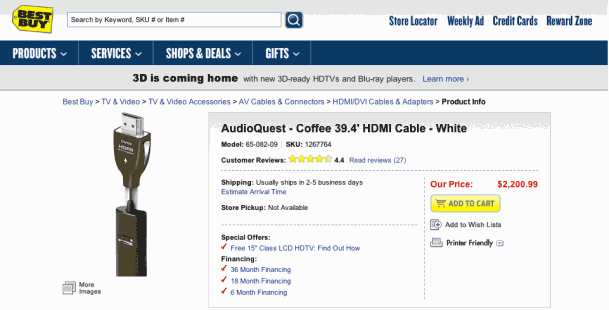 You know you're in trouble when they offer "Financing" for your HDMIcable! 🙂 Ooooooohhh, Ahhhhhhhhh! I'm not making this up! This 39.4 foot HDMI cable goes for $2,200.99. Here's the link.

36 Replies to “I’m Reminded Once Again: You’re Probably Paying too Much for Cables”