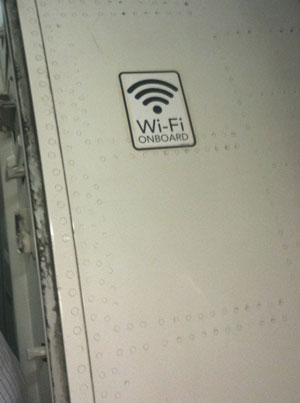 Back in April I finally made it on to a plane that had Gogo In-flight WiFi internet (reviewed it here). I loved it! It was fast and convenient. Although I certainly wouldn't call it cheap, I wouldn't say that it was way over priced either. However, the other day I saw this article on how people weren't using it (less than 10%) and more importantly the reasons why. From the comments I saw, the main 3 reasons were cost, "coach seats are just too small to work" and lastly "flight time is my time and I want to be disconnected." Some are even predicting that if the price doesn't go down or become FREE that in-flight WiFi will go the way of in-flight telephones (most have been removed due to lack of use). While I can see the point, I don't think that it's as bad as the in-flight phones were. They were outrageously expensive and really the only reason you would use one would be in an emergency. However, for me inflight WiFi is one of the few perks left of flying. I don't look at it as I want to be disconnected as much as I see it as the internet IS MY IN-FLIGHT ENTERTAINMENT. My price test is, would I pay for this out of my own pocket? While I do get reimbursed for my internet expenses, I would probably still pay for this out of my own pocket if the flight were long enough. So I guess I feel the price isn't as much of an issue as some do. So what your take on it? Do you use it? If so why or if not why not?

Do you or would you use in-flight WiFi? » make online polls
Tags : wifi in flight gogo

9 Replies to “Do you use in flight WiFi?”