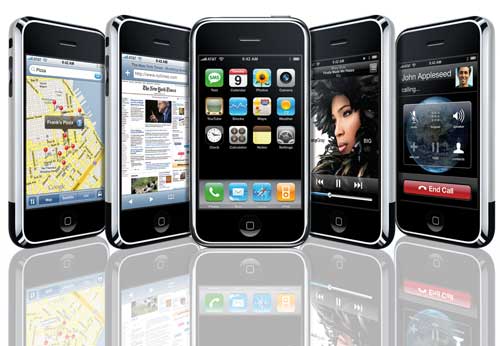 Today marks one week of dedicated iPhone usage for me and the number one question I’ve been getting all week is, “do you still like your iPhone?” I understand where that question is coming from. Most people genuinely want to know. However for the rest they seem to be waiting for the other shoe to drop. The industry and media hyped up the iPhone like no other gadget in modern history. So much so that there was no way for the iPhone to live up to all that hype. Some were even calling it the “Jesus phone.” That one cracks me up the most. Now that the iPhone has been out in the wild for a week, the same media seems to be waiting with bated breath for the tower that they built to come tumbling down. From what I can see, it hasn’t. Everyone I know that bought an iPhone is still enjoying it. Apple is rumored to have sold 500,000 – 700,000 (or over 1 million if we believe the AT&T Activation Rumor) phones in a few days time. The iPhone is now sold out in most locations. This is the fastest selling phone in history and dwarfs the Motorola RAZR by doing better in a few days than the RAZR did in its first month.

If that’s not enough I have to then hear from all the people with all their various reasons why NOT to get an iPhone. Don’t get me wrong, I totally understand reasons like, “I’m in a contract with my current phone “, “I can’t afford it”, “I don’t need it”, “I don’t buy 1st generation devices”, “AT&T doesn’t provide good service in my area”, etc. I have no problem with these reasons. The ones that bug me are the ones that just want to rag on it just because. We shall call them the “glass half empty people.” They say things like, “It’s just a phone”, “my phone does all those things already”, “I don’t see why you would spend $600 on a phone?”, etc. Sure there are phones out there that do most of the same things that the iPhone does and some phones even have more features. What some people don’t seem to get is that it’s not just what the iPhone does, but how it does it. Grown men and women stood in lines for hours to spend $500-$600 on the iPhone. There was a reason for this! They were NOT happy with their current phone or they wanted something BETTER. I’ve used my share of phones and gadgets. However, I can’t ever remember actually having “fun” using my phones of the past.

Here’s something that might help the “glass half empty people” put things in perspective. The iPod came out in 2001. There were several MP3 players already on the market. Most of which were cheaper and some even held more songs. Yet, the iPod came out into this crowded market and worked in a way that no other MP3 player did. It was easy to use, it flawlessly sync’d with your computer and gave you playlists. That’s why it took over the market. People to this day line up to get the newest models. Most iPod owners I know now have more than one. The iPod was supposed to be a failure. There was no way a $399 (just $100 less than the iPhone today) MP3 player was supposed to make it. However, it did and continues to make it big time with over 70% market share. People were yelling the same things, “it’s too expensive”, “it’s just an MP3 player”, “I already have an MP3 player that does all that”, etc. There are still MP3 players out now that cost less and some even hold more songs, but the iPod commands a dominate market share. So with that why is it so hard for some to see that the iPhone is basically doing or has the potential to do the same thing and that the user experience is what sets it apart? Sure there are phones out there with many of the same features. I should know I’ve owned a couple. However, those same features aren’t as accessible, aren’t as friendly to use and definitely not as much fun to use. Most people don’t do email or surf the net on their phones because the experience is so bad. Also most people that I’ve shown the iPhone to and let the play with it start smiling and before they know it, it’s time to hand it back. They start to get it once they’ve actually used it.

Is the iPhone perfect or even close? Absolutely not, I’ve got a whole laundry list of things that I would like to see improved/added (see my in-depth review). However, 99% of what I want done can be done via software updates and Apple is already rumored to be working on delivering a free software update in the not to distant future. The things I didn’t like about my previous phone could only be resolved by buying a new phone, and another new phone and another new phone and even then it wouldn’t be as much fun to use.

I don’t need to carry this stuff any more

I took the opportunity to go through my notebook bag and remove some of the gear that I used to carry that the iPhone has now replaced. Of course I don’t need to carry my Treo 650 any more, but that’s a one-to-one trade. However, I also don’t need to carry around my iPod with video or my iPod shuffle. I used to carry the large iPod on trips to watch videos, listen to music and watch podcasts. I used to carry the shuffle on my key chain so that I would always have an iPod handy in case I got stuck waiting in a line somewhere. The iPhone is an iPod and since I always have my phone on me, I don’t need a second iPod to carry around. I used to carry around a Canary Wireless Digital Hotspotter (a very cool device) for detecting wi-fi networks in the area. Because the iPhone has Wi-Fi, I don’t need a separate device for this. I also used to carry a little pocket Sony 2 megapixel camera for those “darn I wish I had a camera moments.” Yep the iPhone fills that void too. I used to carry a little pocket timer that I used during presentations to let me know how much time I had left. You guessed it, the iPhone has a great timer built-in. There were also some miscellaneous cables and connectors I used with my video iPod that I don’t need to carry either. Now it’s only fair to mention that some of the items like the iPod video cables and camera connector don’t work with the iPhone. However, I can live without them as I hardly ever, like never used them. The one thing that I haven’t mentioned yet is that I also have a Moto RAZR. Why? Because I was so tired of the intermittent problems with my Treo and Bluetooth support in my car that I bought a RAZR to use when I wasn’t traveling. Most times the Treo would connect, sometimes it would just simply disconnet while driving. Sometimes it would lockup the phone while it was connected and sometimes it would work just fine. I would come home from a business trip and take the SIM card out of the Treo and stick it in the RAZR to use on the weekends and days I wasn’t traveling. I don’t need the RAZR anymore either. I’ve been using my iPhone in my car the whole week without a single disconnect, failure to connect or lockup. It’s for reasons like this that we welcome the iPhone onto the scene! 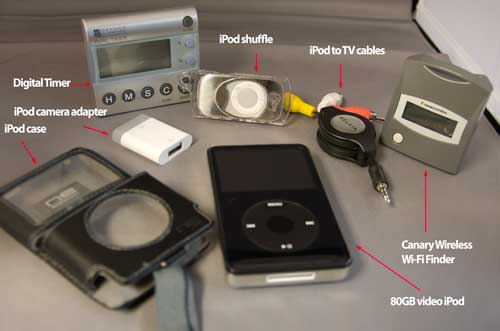 Any problems to report?

Actually no! The iPhone is still working as advertised. I did have a couple of very minor things happen though. I went to re-record my voicemail greeting. Clicking the record button on the phone didn’t do anything. Everything else was functioning just fine. Finally I just turned to phone off and back on and it was fine after that. The only other thing that happened is that while I was connecting it to my computer to sync up, I may have inadvertently done things out of sequence and although the display said that it was syncing, nothing was moving. So I unplugged it and reset it (like you do on an iPod), plugged it back in and all was well. Other than that it has performed VERY WELL. Never missing a beat on phone calls or bluetooth operations. My Treo would lock up just sitting there. So this is definitely an improvement. Battery life also seems to be as good as advertised. Sorry to disappoint all of those (you know who you are) folks waiting for the horror stories, I just haven’t had any yet. Rather than sit there are grumble, get up head out to your local Apple store and play with one. Then come back and grumble. At least then your grumbling will have credibility. 🙂 Life’s too short. Try being happier.