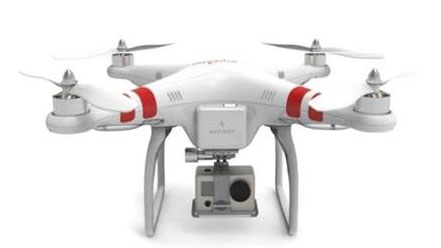 As some of you may remember, a while back I bought a Parrot AR Drone 2.0 mostly for fun and to fly around and record videos of my production setups. While the AR Drone 2.0 worked perfectly for short distance flights, it’s limited by the range of WiFi. It’s also limited to the built-in 720p video camera. During Photoshop World Vegas I attended Russell Brown’s pre-conference on the DJI Phantom Quadcopter. The entire class was given instruction on flying them and the chance to fly them all day. I was impressed by the control and range of this one over the AR Drone. It was like going from a point and shoot camera to a DSLR. Both can capture great images, but you have much more control and potential quality with a DSLR. The Phantom comes with a mount to mount a GoPro camera. Since I already had a GoPro Hero 3 Black camera and they were offering a show special to pre-con attendees on the Phantom, I figured it was time to upgrade and step up to a better quadcopter. When it arrived the setup was relatively simple. You have to put the landing gear on and the propellers. There’s a compass calibration routine as well. One of my friends told me to upgrade the firmware and I did. However, I was a little ticked that the only way to upgrade the firmware was with a Windows PC. Their Utility only runs in Windows. I use Parallels on my MacBook Pro with Windows 7 and had no problem updating the software as well as running the utility. It would be nice to have a native Mac version. Lastly I mounted my GoPro in the supplied mount.

You can see the video here from my first flight. I already knew that to get steady video you’re really going to have to ditch the supplied mount and get a gimbal. This will make your videos a million times steadier. So my video is not steady. I also forgot to put the GoPro in 720p wide mode, but here it is:

I basically flew it straight up, captured some video and brought it back down. It was getting dark and I didn’t want to crash. After I got the hang of it I took it out the next day and went much higher and this time having the GoPro capture stills every 2 seconds. 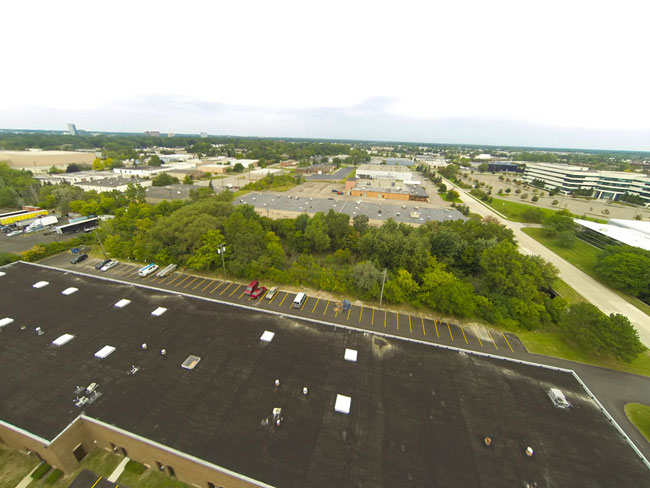 I’m amazed at how high this thing can go! My colleague has taken his over 1600 feet. I don’t have an altimeter, so i can’t say how high I’ve flown it, but I’ve flown it so high that I could barely see it and could no longer hear it. 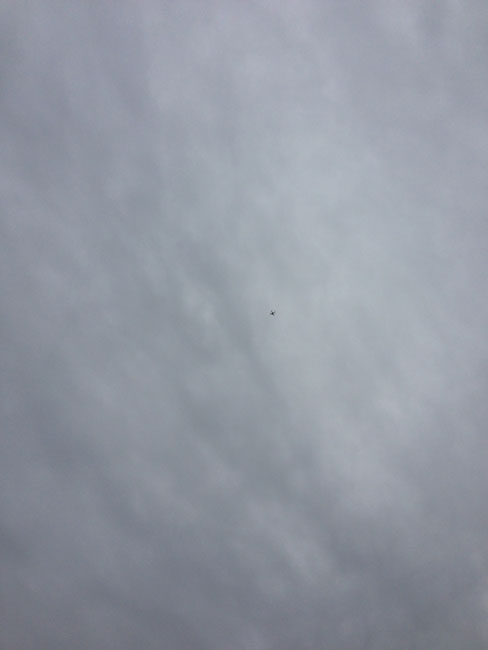 In the pic above that I captured with my iPhone, you can see a black dot. That’s the phantom so high up that it almost disappears. I’m having a blast with this thing. 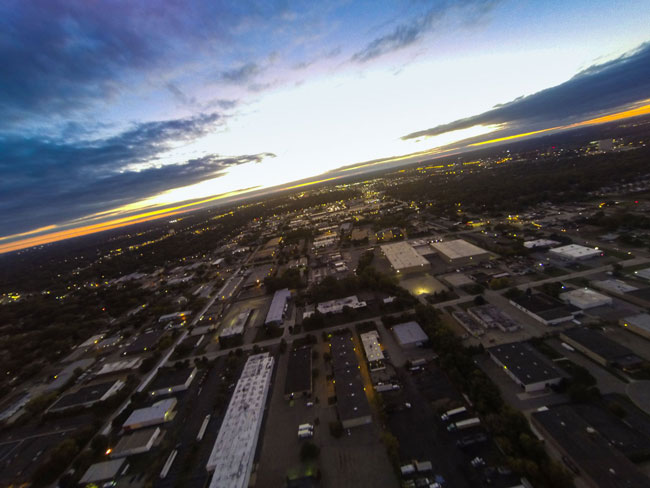 Above is a shot I took recently as the sun was setting. I also realized at this point that the GoPro doesn’t do well at all in low light. Most of the shots from this flight were blurry because the Phantom is vibrating and fighting the wind, so the camera is far from still. One of the things I really like is that the Phantom has a GPS built-in. If for whatever reason you fly out of range of the controller or the controller loses contact, the Phantom will fly up about 60 feet and then automatically returns to the point where it took off and lands. While I’ve had some really great flights so far, I did have a crash. I actually lost a propeller during flight. It wasn’t screwed on tight or had shaken loose and it flew right off. The Phantom came straight down spinning out of control. Luckily for me it hit the grass and there was no permanent damage. Thankfully the DJI Phantom comes with an extra set of propellers. It was really windy that day and I was flighting the wind just to keep the Phantom in place. I happened to be capturing video at the time with the GoPro. You can see the crash video below.

You can get the DJI Phantom (ON SALE) here. It comes with a battery that gives you about 12 minutes of flight. You’ll probably want an extra one here.

You can get the GoPro Hero 3 here.

I don’t have a gimbal yet, but here are some to allow you to record more stable video.

My Phantom loses a propeller during flight