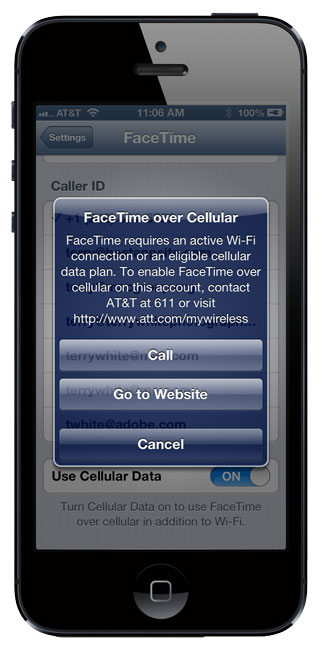 I’ve been beating up on AT&T a bit lately for their practices that basically punish users (early adopters) of their Unlimited Data Plans. The most recent punishment was when iOS 6 was introduced, Apple finally allowed for FaceTime calls over Cellular on iPhone 4s, iPhone 5 and iPad 3 (or higher). However, once again AT&T said NO to this if you were one of the original iPhone users still grandfathered in to an unlimited data plan. This is the 3rd time in recent history that AT&T has crippled a feature that the device or os could do, just because you weren’t on one of their “newer” ie. non-unlimited data plans. The first one was when iOS supported tethering. Unlimited data plan users still can’t access or add this feature even if they are willing to pay extra for it without leaving their unlimited data plan. The 2nd one was when the iPad allowed tethering and once again AT&T was silent on this issue for all users. Lastly there was the FaceTime over Cellular feature that once again AT&T said NO to all but those on their newest Shared Data Plans. I get it. AT&T wants users to move off those Unlimited Data Plans and they are trying to force the issue by basically crippling the features that your device can do. Is it fair? NO. Do you have a choice? Yep, you can switch plans or switch carriers and that’s exactly what I did with my iPads. Any cellular capable iPad I buy, I now buy the Verizon version. The irony is that back in the day Verizon was the carrier that played these games by disabling features like bluetooth on certain handsets. However, Verizon has changed their ways somewhat and now they say come on it.

AT&T may have changed their tune too

It appears that at least for some, starting yesterday AT&T has quietly been turning on FaceTime over Cellular for All users (iPhone 4s, iPhone 5, iPad 3, etc. on iOS 6). There are several reports that users simply turned their iPhones off and back on again and either the feature was already turned on or they were able to enable it without the familiar blue message I still get above. These users that have it working are all claiming that they are on a grandfathered Unlimited Plan. However, there are just as many users like me where the feature still isn’t enabled yet. So perhaps it will take time for it to roll out to all or perhaps it was a mistake, fluke or still not available for “all” users (ie those on Corporate Unlimited Data Plans), but time will tell. If this feature does roll out to all, It will change my attitude towards AT&T to be a bit more favorable than it is right now, and it truly would be a Happy Tech Thanksgiving.

Does it work for you? Did you power your iPhone down and back on again? Are you on the original Unlimited Data Plan? What state are you in? (keep in mind you have to be on iOS 6 and an iPhone 5, iPhone 4s or iPad 3 or higher).